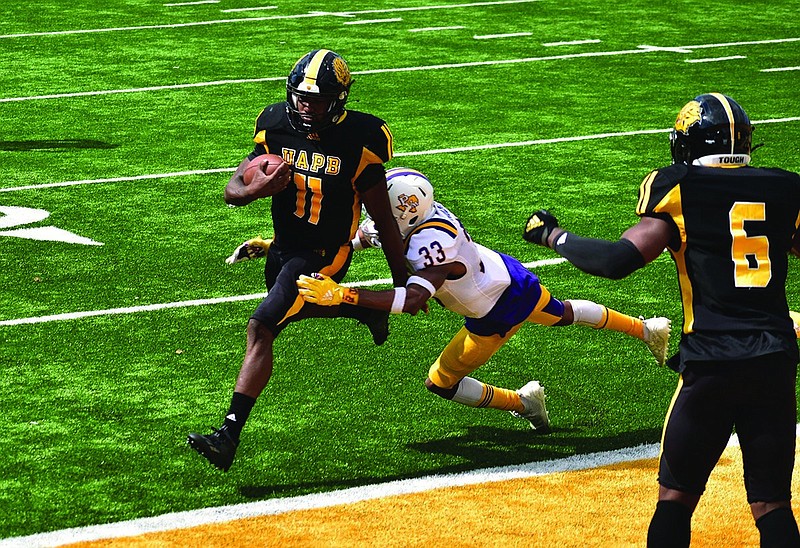 Quarterback Skyler Perry and UAPB open the 2021 season today against Lane College in Pine Bluff. Perry accounted for 16 touchdowns during the spring season, including 13 passing, as the Golden Lions advanced to the SWAC Championship Game. (Pine Bluff Commercial/I.C. Murrell)

Just four months after its last game, the University of Arkansas-Pine Bluff football team is ready for the quick turnaround.

UAPB will embark on the 2021 season at 6 p.m. today at Simmons Bank Field when it hosts longtime rival Lane College.

The last time UAPB suited up for a game was May 1 when it lost a 40-33 decision to Alabama A&M in the Southwestern Athletic Conference Championship Game in Jackson, Miss., during an anomalous spring season. Since then, the Golden Lions have worked toward ensuring they get another shot to play for a SWAC title in December.

In the midst of a summer's worth of workouts that culminated with the recent end of preseason camp, UAPB retooled its roster with newcomers, several of whom Coach Doc Gamble is counting on to help build stability on a team that returns all but three starters.

Perhaps the biggest significance for today's Dragons-Golden Lions matchup is that it represents a return to normalcy.

"We've been working," said Gamble, whose team's spring schedule came about when the SWAC barred any games from being played last fall because of covid-19. "The hay is in the barn, and we're looking forward to getting this thing going.

The wear and tear of preseason practice was missing at UAPB during this time a year ago, but the Golden Lions hit the ground running with sessions in January to prepare for the spring. For Lane, there was no such preparation.

The Dragons' last game took place almost 22 months ago, and they haven't had the extended outings on the field like their counterparts.

"Covid set us back a whole year," said Lane Coach Vyron Brown, who was hired in January 2020. "We didn't get the opportunity to play in the spring, and we were sent home as a football team four different times in the last 18 months due to covid, and the school being shut down.

"It's been rough for guys to see high schools playing, see other colleges playing, see NFL teams playing when we didn't have the chance to play. Mentally, that kind of does something to you.

"One thing about our kids, though, is they're resilient. They kept coming back, they kept showing up and never complained. They're ready for the opportunity that they're going to get to be able to compete."

Despite UAPB dominating the series overall, Lane won't necessarily be a pushover.

The Golden Lions had to hold off a big second-half rally to win their most recent meeting, 45-38, in 2019. The Dragons will have many of the same players, including senior specialist Anthony Evelyn. He caught 8 passes for 137 yards with 2 touchdowns and had a 70-yard punt return for a score in that game against UAPB.

"He's really taken more of a vocal role for us, too," Brown said of Evelyn, who finished with more than 1,600 all-purpose yards and 10 touchdowns as a junior. "The expectations for our team and for him are high. The other guys know that they've got to step up because he's going to be the main target for the other teams."

Quarterback Tarik McKenzie -- who threw for 1,551 yards, 16 touchdowns and 2 interceptions two years ago -- and linebackers Jeffrey Johnson and Brayce McKinzie -- a duo who combined for 126 tackles and 9 sacks in 2019 -- joined Evelyn on the preseason All-Southern Intercollegiate Athletic Conference.

"A lot of those guys over there played against us a few years back and took us down to the wire," Gamble said. "But what's really going to make it a tough one for us is there's a lot of unknown. They've got a new coach and a new defensive coordinator. All of our games were available last year by different means, but we haven't had the opportunity to get any film on them."

The Golden Lions don't have any glaring gaps on either side of the ball, with quarterback Skyler Perry leading an experienced offense, and Isaac Peppers manning the defense. Gamble did want to shore up the running back spot during the preseason, and he believes he's done that with the addition of freshman tailbacks Kayvon Britten, Thomas Mimes and Daniel Ingram along with University of Central Arkansas transfer Kierre Crossley.

"It's been a pleasant sight to see, that unit," Gamble said. "They've done some things in practice that wasn't seen in the spring out of that position. We're looking forward to seeing how they react on game day."

That day has come, and it's one the Golden Lions have been pointing to ever since the final seconds ticked off Mississippi Veterans Memorial Stadium in May.

NOTEWORTHY Lane Coach Vyron Brown was the team’s offensive coordinator before being elevated to head coach last year. He’s also spent time on the staffs at Shaw University as well as at SWAC programs Grambling State, Texas Southern and Alabama State. … UAPB won’t play against until Sept. 18 when it travels to the University of Central Arkansas. The last time the two teams met was in 2003 when UCA held on to win 42-28 at War Memorial Stadium in Little Rock. … Quarterback Skyler Perry led the Golden Lions in passing (102-178, 1,236 yards, 13 TDs) and rushing (52 carries, 216 yards, 3 TDs) during the spring. … Lane, which was picked to finish fifth in the Southern Intercollegiate Athletic Conference’s West Division, had four players named to the league’s preseason team, with senior Anthony Evelyn earning first-team honors at both wide receiver and kick returner. … UAPB specialist Tyrin Ralph garnered all-SWAC honors at dual spots. He was a first-team pick as a returner and a second-team selection at wide receiver.