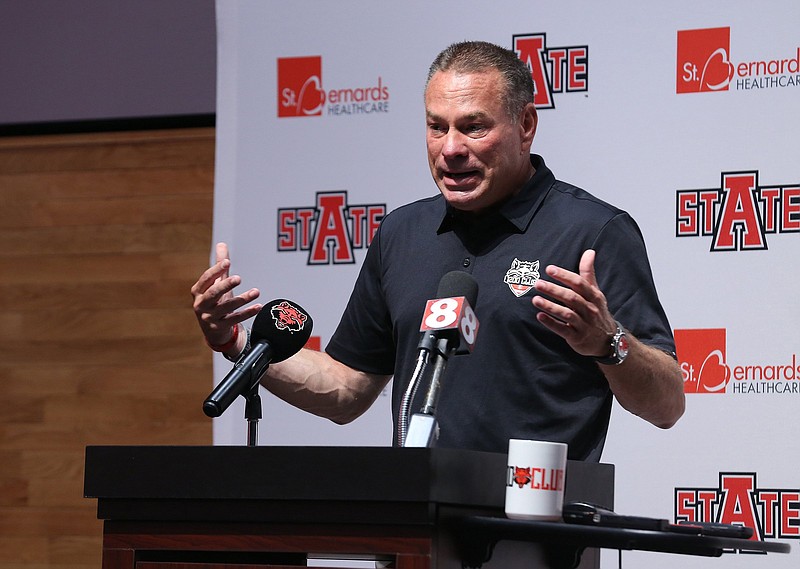 High on the wall at the front of Arkansas State University’s auditorium hangs a black sign emblazoned with a smattering of football cliches.

Listed are Coach Butch Jones’ expectations: The ball, special teams, team first, fundamentals & discipline and toughness. Each has a series of bullet points below, with the usual dots replaced by the Red Wolf logo.

Nestled between the first and third phrases is a saying that’s less intuitive than the rest: 4-6/A to B.

It’s a mindset Jones has adopted from former Ohio State coach Urban Meyer — the typical football play lasts between four and six seconds, and the expectation is that each player is moving at full speed between points A and B.

“What we’re trying to build here is a big-time program,” said director of player personnel Matt Wilson, who previously worked on Jones’ staff at Tennessee. “It’s how [Jones’] organization is just going to be run, and it’s not going to be twisted because of where we are.” You can’t go a few minutes at practice without hearing a coach call out, “4 to 6.” And seemingly every player finds a way to mention the idea of “A to B” while speaking with media.

Jones successfully has ingrained this type of mindset to his team before every playing a game.

The idea is simple: Approach everything as you would a game, and you’ll know how to handle things when they happen in the course of live action. At least that’s the goal as ASU heads into the season opener against the University of Central Arkansas tonight at 6 at Centennial Bank Stadium in Jonesboro.

“We’re putting a lot of time and effort and detail into the things we do in practice and meetings, so when it’s time to perform, we’ve seen it all.”

“We’re putting a lot of time and effort and detail into the things we do in practice and meetings, so when it’s time to perform, we’ve seen it all,” cornerback Jarius Reimonenq said. “We’ve done it before, it’s been rehearsed. We know at the end of the day [with] the game of football and just anything in life, what you put into it, you’re going to get out of it.” Those rehearsals began the day before the start of fall camp when the Red Wolves walked through their opening practice.

ASU then approached last week as if it were Week 1. After its final preseason session Aug. 23, the Red Wolves pretended as if each day were the same as the corresponding days this week.

Friday night, like they did this week, ASU headed across the street to the Embassy Suites after practice. The Red Wolves ate prime rib and fettuccine Alfredo as a team — with no phones, something wide receiver Corey Rucker noted as a major change from last year. Individual and team meetings followed before going to bed on the early side.

Saturday, ASU was awake by 9 a.m., gathered again for a team breakfast and then spent much of the remainder of the day watching TV and getting treatment.

Around 3:30 p.m., the team made its way back across Alumni Boulevard for the Red Wolf Walk, went to the locker room and was out on the field by 4 p.m. — a full two hours before kickoff.

Jones has taken a similar approach at each of his three prior stops — Central Michigan, Cincinnati and Tennessee — although his programs haven’t had the luxury of staying at the team hotel ahead of time. That added bonus came together with the financial support of Athletic Director Tom Bowen and the organization of first-year director of football operations Hayden McClain.

“You’re trying to alleviate the stress and the anxiety of going through things for the first time,” Jones said. “As many things that can happen in the game that you try to simulate, there’ll be a couple of nuances that occur Saturday night that we haven’t practiced. It’s the ability to adapt and adjust, let your training kick in [and] your habits kick in.” Defensive end Kivon Bennett was recruited to Tennessee by Jones, and in just one season, he experienced a coach similar to the one he’s seen in Jonesboro. But Bennett acknowledges there’s a greater intensity with Jones this time around.

In five seasons in Knoxville, Jones managed a winning conference record just once — a dramatic drop-off from his prior two head coaching stops where he won nearly two-thirds of his games.

After his firing with two weeks remaining in the 2017 season, Jones joined Nick Saban’s staff at Alabama and spent the next three years in Tuscaloosa as the Crimson Tide captured two SEC titles and a College Football Playoff championship last season.

It was a time not for Jones to reinvent his approach, but reshape it.

“Coach [Saban] and I used to talk about it all the time: People who leave Alabama [make the mistake of trying] to make their next place Alabama,” Jones said. “There’s only one Alabama. You can’t copy and paste a culture because that place is unique and very, very special.

“What you try to do is take the things that you think your program needs, and every program is different, every team is different. There’s a lot of adapting and adjusting to what you need, and I think having the experience of the other places lends itself to be able to do that.” With the Red Wolves, it’s about a “professional approach.” Defensive tackle Terry Hampton knows that being on time now means being early. Rucker, who is set to make just his second career start at wideout, feels an edge and nervousness around the team. Everyone hopes to make a good first impression.

That’s exactly how Jones wants it.

RECORDS Season opener for both

NOTEWORTHY ASU is a 13.5-point favorite over UCA. … The Bears’ lone victory against the Red Wolves as Division I teams came in 2016 when UCA climbed out of a 23-16 hole in the fourth quarter to earn its first win against an FBS opponent. … ASU Coach Butch Jones returns to the sidelines for the first time since Nov. 11, 2017, when he coached his final game at Tennessee — the Volunteers went 34-27 under Jones. … Quarterback Breylin Smith will be on a Bears roster for the sixth straight season, and he’ll have the assistance of ASUN preseason offensive player of the year Tyler Hudson at wide receiver. … ASU has yet to name a starting quarterback, with Jones deciding between redshirt junior Layne Hatcher and Florida State transfer James Blackman. … ASU and UCA are not scheduled to meet again until 2024 when they’ll play at Centennial Bank Stadium.