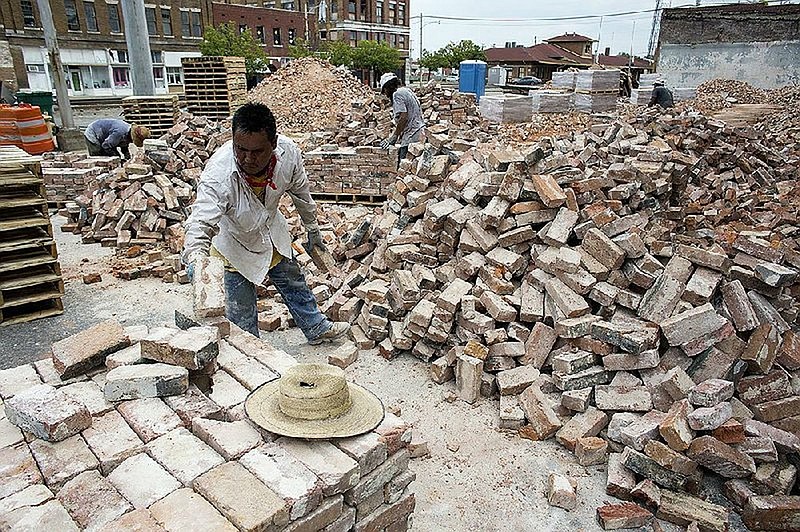 Workers organize bricks at a demolished building site on Aug. 6, 2015, off Main Street between Fourth and Fifth avenues after the former Band Museum building and a former VFW post collapsed on Feb. 21. This area is included in the Go Forward Pine Bluff strategic plan. (Arkansas Democrat-Gazette file)

"To accomplish this very aggressive plan, it will require a considerable amount of money! It will need to be funded through a combination of grants, business investments, public/private partnerships and a new sales tax. None of us want another tax, but our challenge is too great to repair overnight, and donations and grants will not fund it alone. Think of our effort as "an investment in the future of our families." If we are successful, we will look back on our investment as the best we've ever made." - J. Thomas May, chairman Simmons First Foundation.

In January 2017 a 58-page plan was released by Go Forward Pine Bluff detailing recommendations as part of a strategic plan offering future direction for the city of Pine Bluff.

A signed letter from May; Mary Pringos, Go Forward Pine Bluff chairwoman; and Carla Martin, pillar chairwoman, expressed the vision, case statement, planning process, strategic plan and what it would take to bring the vision to fruition.

Mayor Shirley Washington, who was part of the diverse group of approximately 100 citizens who met for more than year to develop the plan, said Go Forward Pine Bluff was an opportunity for citizens to envision the possibilities of their community.

From January to December 2016, the group of volunteers convened monthly to discuss and develop a plan aimed at resolving the deteriorating downtown, lack of jobs, declining population, poor reputation and the inadequate city budget.

The meetings concluded with recommendations to attract, retain and spur business development along with resident interest.

"Our community was faced with significant challenges that needed to be addressed," said May, who added that the challenges were in education, government infrastructure, economic development and quality of life. "In our opinion, there was nothing more important than to deal with these issues if we were to retain population, provide proper education to our children, and to make Pine Bluff a place our children would be proud to call home."

George Makris, CEO of Simmons First, approached the Simmons First Foundation about facilitating an effort to address the challenges facing Pine Bluff. The bank provided a gift of $300,000 to fund the development of a strategic plan.

Go Forward Pine Bluff was created and an executive committee was established that included Pringos, agri-business leader and chairwoman; Martin, vice chancellor-finance and administration, University of Arkansas at Pine Bluff; and May, CEO of the Simmons First Foundation.

The group's focus consisted of:

• Building a metropolitan community that offers residents an attractive, safe and healthy environment with a wealth of cultural, social and entertainment options.

The effort to address the systemic problems confronting the city was divided into four focus areas or "pillars," and the executive committee assigned a chairman to each group.

The Go Forward Pine Bluff plan never included infrastructure or water improvements, according to the mayor's office. The plan also pointed out that the city was responsible for maintaining most of the local infrastructure as it relates to roads, bridges, drainage and sewers.

The goals for each pillar were as follows:

• Creating a land bank to help acquire and manage abandoned and foreclosed on properties.

• Repurposing the land around the Pines Hotel as a city square.

• Establishing a candidates' institute to train Pine Bluff citizens on the responsibilities of public office.

• Creating a civil service commission to serve as an independent body to hear complaints about Pine Bluff civil servants and making independent decisions on personnel to protect from undue influence by elected officials.

Quality of life in Pine Bluff was identified as a major issue in research by Go Forward Pine Bluff. For that reason, the Quality of Life pillar developed a series of recommendations focused on five areas of concern (1) things to do, (2) marketing of Pine Bluff, (3) public safety, (4) beautification/community gardens (5), fitness, health and sports.

Suggestions made to improve quality of life included:

• Making downtown Pine Bluff a "point of destination" by establishing a downtown historical district to highlight sites of major cultural and historical significance.

• Creating an incentive program to attract restaurants and young professionals to set up in a renovated downtown.

• Establishing a permanent food court pavilion downtown to create a permanent house for the city's food truck businesses and create a draw to downtown.

• Creating a program to bridge the gap between law enforcement and the greater community.

• Establishing a coalition of neighbor associations and watch programs.

• Building a public park on the new city square near the Pines Hotel, beautifying downtown Pine Bluff and making it attractive from a landscape and streetscape perspective for potential commercial and private residents.

• Constructing a biking/walking trail through the city that will link regional parks to Saracen Landing and the proposed renovated downtown district.

• Establishing a winter-time invitational basketball tournament to increase tourism and opportunity for area colleges to recruit athletes, raising the city's profile as a sports town.

• Go Forward Pine Bluff suggested creating an educational alliance when it comes to improving schools by tapping the area's higher-learning institutions and other community stakeholders to help make the difference.

The plan noted that Pine Bluff's reputation made recruiting teachers problematic and that UAPB had difficulty graduating a sufficient number of qualified and skilled teachers for the region.

Salaries were also low at the time, and the academic quality of students graduating from schools of education was an ongoing problem.

"Our community was faced with significant challenges that needed to be addressed," said May. "In our opinion, there was nothing more important than to deal with these issues if we were to retain population, provide proper education to our children and to make Pine Bluff a place our children would be proud to call." 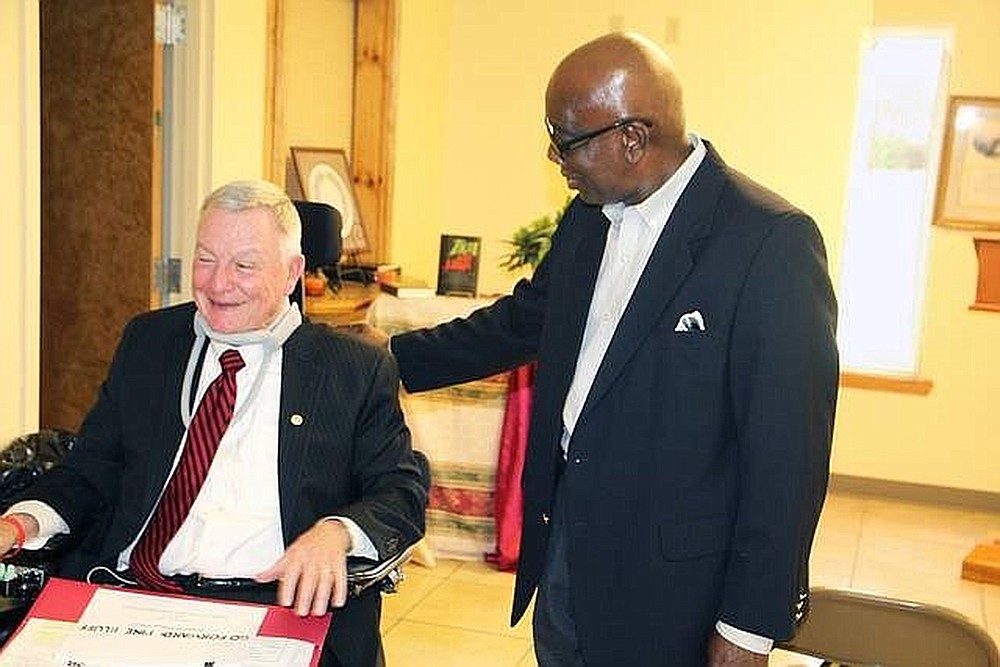 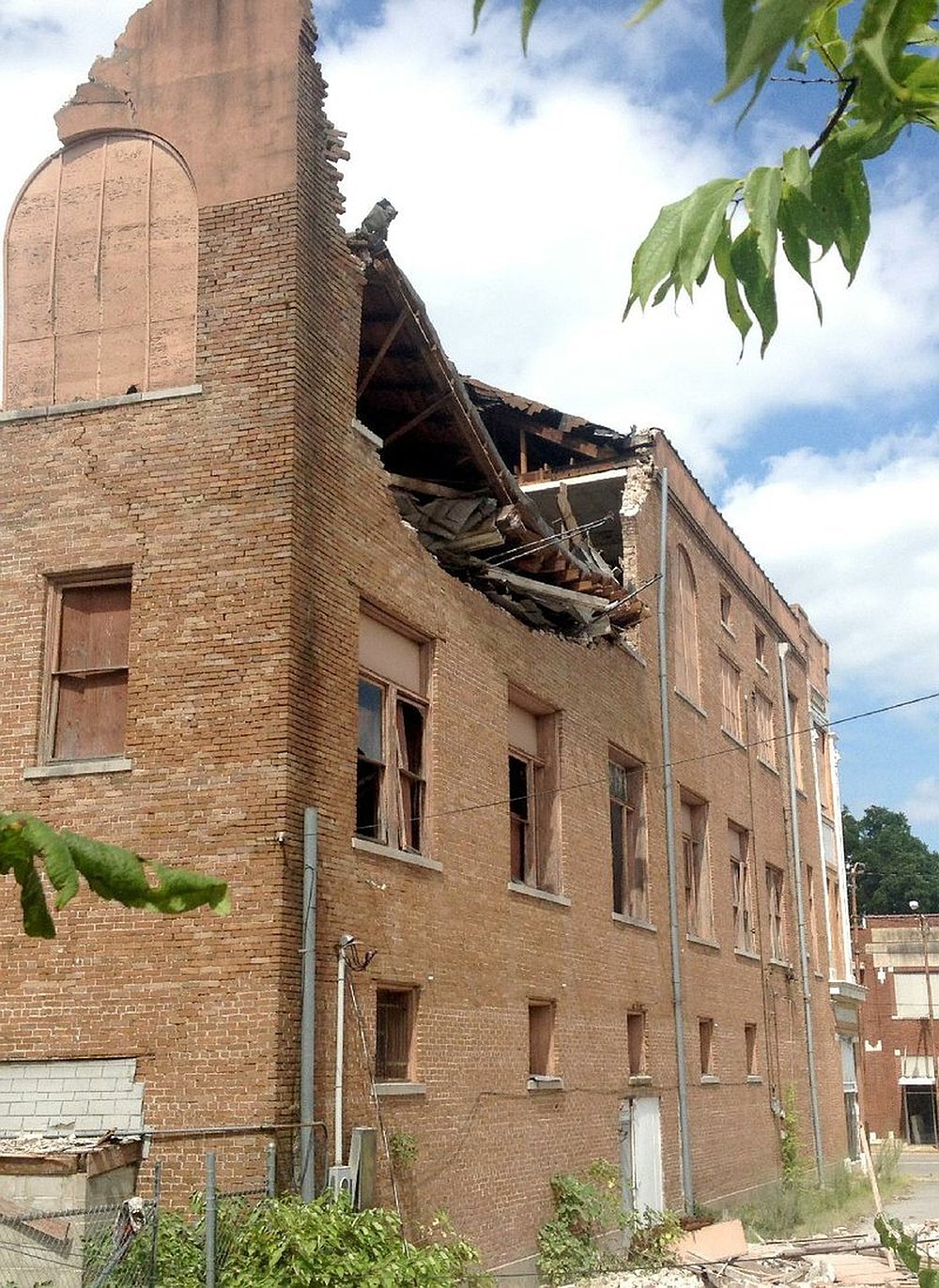 One of Go Forward Pine Bluff’s initiatives is to revive downtown by removing blight and restoring dilapidated historical buildings. The top floor at the rear of the vacant, three-story Shriner Building at 602 Main St. in Pine Bluff collapsed in July 2014. (Arkansas Democrat-Gazette file)