Love at first sight -- she on quad, he at beach 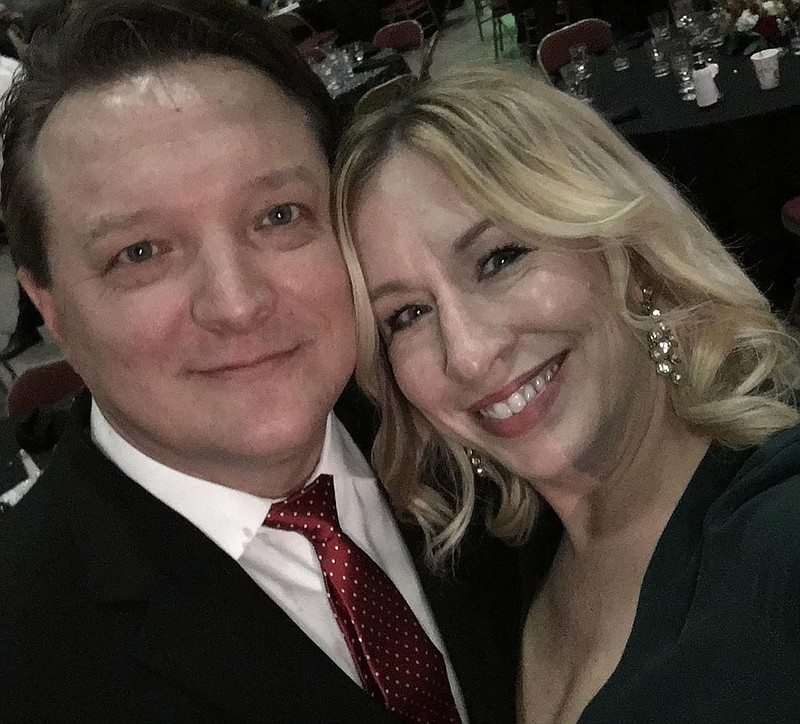 Tim Carroll may have been joking when he told his friend he was going to marry Brandy Rennicke after he saw her walking across the quad at Lyon College in 1992. “I had a feeling,” he says. “It was like I heard bells and whistles and just the ‘aaaah’ sound, and she was just glowing out on the quad.” (Special to the Democrat-Gazette)

Tim Carroll had an inkling Brandy Rennicke was someone special the first time he saw her. Brandy didn't take note of him until she saw him rising from the water of Bryan Lake.

They were students at Lyon College in Batesville in 1992. Brandy was a sophomore when Tim arrived for his freshman year. He was moving furniture in the dorm with his roommates the first time he spotted her.

"We saw her and a friend of hers walking across the quad and we all just kind of stopped and stared and I'm sure she could see us staring out the window," he says. "It was evidently some sort of sorority deal because they were all dressed in navy dresses. It was a very formal-looking procession, and she stood out among all the ladies walking across the quad."

She was the tallest among the group, he remembers, her hair pulled up in a ponytail.

"She looked like she had an entourage walking around her," he says.

He saw her around campus after that, but he wasn't ready to approach her.

A whole year had gone by when, after returning to campus after summer break, she noticed him at the annual traditional cardboard raft races.

Tim wore cut-off gym shorts that day, and he had pulled off his T-shirt when it got wet, a stark contrast to his usual '90s-style loose pants and generously-cut shirts, she explains.

There was a back-to-school dance around that time, on a patio overlooking the town of Batesville, and Tim was there with his fraternity brothers.

Tim and Brandy, propelled by their friends' encouragement, wound up dancing together that night.

"It was just this big mass of humanity," Tim says. "We were all in this big group dancing around and all of a sudden I turned around and she was there."

Brandy says there were several players involved in making sure they were in proximity of each other.

Tim worked with Brandy's roommate in intramural sports by then.

"He was kind of like her little brother," Brandy says. "We think maybe she and his friend Larry and some other people maybe just kind of ushered us together."

Tim had moved into an on-campus apartment that faced Brandy's that year, and they and their mutual friends all hung out together. Brandy's roommate had furnished their apartment with cool 1950s furniture and decor, like a dining booth, neon lights, bumper car chairs and a Pepsi cooler that opened from the top that they used as a refrigerator.

"The couch was red vinyl and it was made like a car and it had fins and it lit up," Brandy says.

Tim and his roommate built a full-size bar, a big stereo and a grill for burgers for their apartment.

"It was just a happening place," he says.

Tim and Brandy hung out together there, and they sometimes went out, too, to fraternity and sorority parties and various events on campus and to movies and restaurants.

During finals week of Brandy's senior year, she was unimpressed by the cafeteria options so she and Tim went to the grocery store for noodles with Alfredo sauce.

"I had gone to a jeweler in Batesville about a month before and I found this ring that I really liked and I took a chance and bought it," Tim says. "I was carrying it around because I couldn't figure out where to put it, so it was just in my pocket."

Tim had been fiddling with the ring and it somehow flew out of his pocket and skittered across the floor in front of Brandy.

"You could hear it tinkling as it went under the shelf. I thought there was no way of hiding it at this point so I decided to propose, right there in front of the noodles," he says.

They left without buying anything, taking a detour to share their news with Brandy's family before heading back to campus.

After Brandy's graduation, Lyon College hired her as an admissions counselor.

They were married June 29, 1996, at Holden Avenue Church of Christ in Newport, shortly after Tim graduated.

Brandy and Tim moved from Batesville to Little Rock in 1997. She is assistant director of commodity and regulatory affairs for the Arkansas Farm Bureau Federation. He is lead database administrator at Southwest Power Pool.

It may have taken Brandy a little longer to notice Tim than it took for him to notice her, but once he was on her radar she was smitten.

"He graduated from Earle High School and he tested into calculus III at Lyon College and so he was also pretty bent on math and on studying," Brandy says. "He was pledging his fraternity and I had my sorority and I guess it took seeing those muscles -- there were so many muscles."

He says: “I told my friend I was going to marry her.”

He says: “I was nervous, but my best man kept things light and was conversational.”

She says: “It was fun, but it was a blur. It was a really happy time with lots of friends and family and people we love and who love us.”

He says: “Listen and be patient.”

She says: “Keep your sense of humor and do your best to always remember the good things. Focus on the positives.” 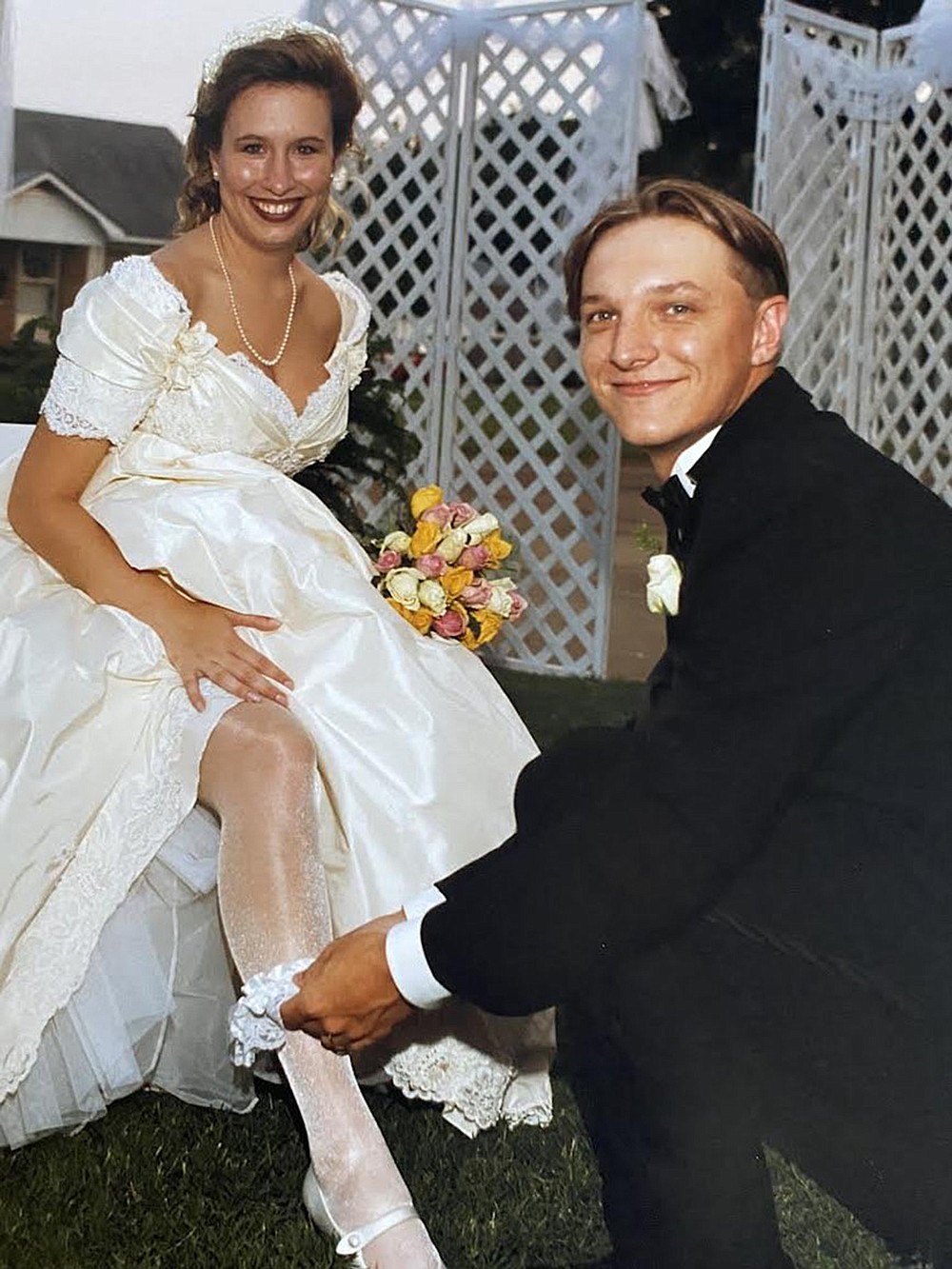 Tim Carroll and Brandy Rennicke were married on June 29, 1996. Tim’s muscles caught Brandy’s attention, but his smarts and sense of humor captured her heart. “Once I met him, I realized how dang smart he is,” she says. “I just needed to sit down and get to know him.” (Special to the Democrat-Gazette)

Print Headline: Love at first sight -- she on quad, he at beach