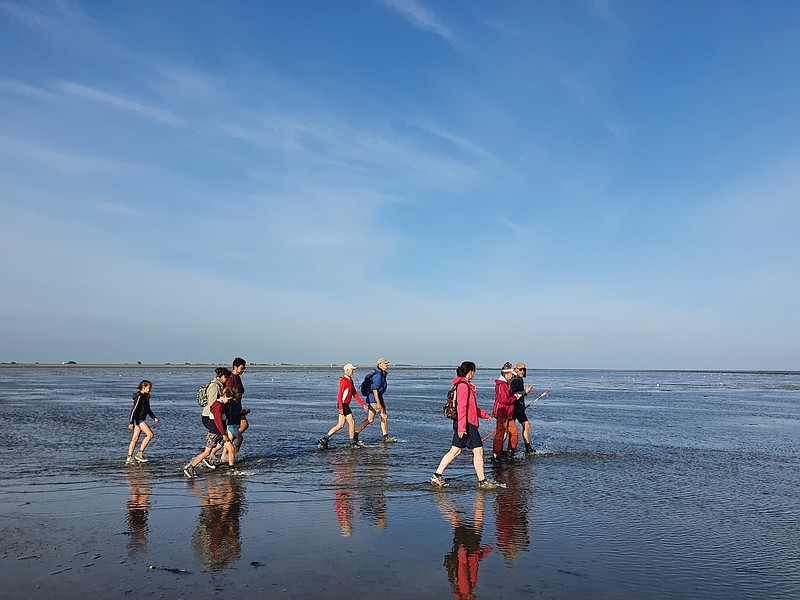 Our guide, Harm Jan Wilbrink, warned us that the stone embankment leading to the sprawling mud flats might be slippery. Letting the others in our small group go ahead of me, I descended slowly on my hind side, determined not to lose my balance and end up with an unwelcome facial mask from the get-go.

We were in Friesland, in the far north of the Netherlands, on an unusually sunny and barely warm Friday morning in late July. Our 1880s rental cottage was just up the road in Moddergat, a former fishing village whose name translates to "mud hole." Indeed, in this region, all footprints lead to the iconic Dutch activity of wadlopen, or "mud walking."

The "wad" refers to the Wadden Sea, which isn't the kind of sea you frolic in but is the world's largest unbroken intertidal zone of sandflats, mud flats and gullies. ("Wadden" translates to "mud flats.") Wadden, which connects with the North Sea, is situated between the coast of northwest continental Europe and the Frisian Islands, also known as the Wadden Islands.

Including the islands, some of which are inhabited and popular with visitors, the Wadden Sea covers about 4,400 square miles. Since 2009, it has been a UNESCO World Heritage site as well as a nature reserve and is protected by the Netherlands, Germany and Denmark. The region is also known as a playground for aquatic species such as worms, flatfish and shellfish, and as a home or resting spot for dozens of species of birds.

One safety note: Mud walking should only be undertaken with a guide. Walkers should wear shorts and several layers on top, and take water and food. Only high-top sneakers are recommended and they will get extremely muddy, so it's a good idea to rent shoes. Your outfitters will provide further instructions based on the specifics of your tour. 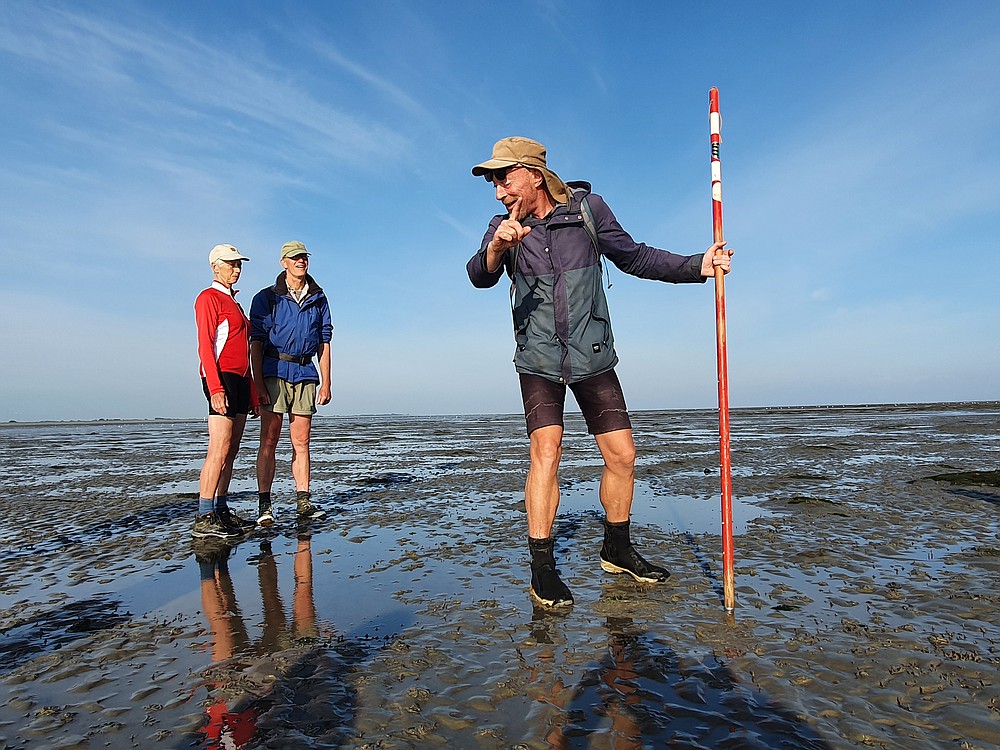 TALK TO THE MUD

"In gesprek komen met het wad," advised Wilbrink as we stepped down onto the flats, telling us in Dutch to "have a conversation with the mud."

Once I started walking, I knew that the conversation was going to get awkward. Immediately my right sneaker (a rental, thankfully) was sucked into the dark brown muck. I teetered but didn't fall. And how had everyone already gotten so far ahead of me? At least being in the rear gave me a view of the artistic imprints their shoes left behind.

I called out to my wife, who is Dutch and had done this before, for help. She turned around, surprised to see I hadn't traveled far.

"Go to the left," she said, coming back to help. "It's a little firmer there."

She showed me her technique of sliding one foot forward a bit to get momentum before stepping down, then quickly moving the other one. It felt a bit like ice skating, for which the Dutch are famous and I am not. That helped, and I was able to catch up to the others in the group, seven adults and three children.

We were crossing land that had been under 11 feet of water at high tide only a few hours earlier, according to Wilbrink. Typically it would rise to 6 feet, he said, but strong winds the day before caused higher water. For the same reason, a usually dry brick jetty we had first used to reach the mud had been littered with seaweed and a few fascinating remnants of the sea, including crabs, a couple of jellyfish and the bottom half of a harbor porpoise.

For nearly 15 years, Wilbrink has guided walks from the village of Paesens, adjacent to Moddergat. The villages' combined population is 450. He starts tours at the headquarters of his nonprofit group Oan 'e dyk, Frisian for "on the dike," whose aim is to help preserve the area's natural surroundings. It's housed in a former church meeting building across the street from the grass-covered dike that runs along the Wadden Sea. We knew we had found the address when we saw a patio lined with dozens of pairs of old stained sneakers in various shapes and sizes, which Wilbrink rents out to walkers. (Around the corner is the pride of Paesens, the huge Saint Antonius Church, built in 1250 as a Catholic church, and in 1580 converted to Dutch Reformed.)

After trudging through thick goop for 20 minutes or so, we reached higher ground, where the ridges glistened like a lumpy oil painting that hadn't yet dried.

Along the way, Wilbrink had pointed out a Japanese oyster, the outline of a flat fish on the sea's bottom and squiggly lugworm castings. He also drew our attention to less obvious sights.

"See these little brown spots," he said, pointing to a darker bit of soil. "They're organisms called diatoms. I just read that they produce up to half the oxygen on the planet."

Before covid-19, Wilbrink also hosted foraging trips, looking for things including mussels, crabs, oysters and, for salad, zeekraal, or "samphire" (also known as sea pickle or sea green bean). He plans to reinstate those in the future.

Wilbrink came to this region when he was in his 30s from an urban area. Nearing 50, he has stayed for the nature and the solitude. "I live like a monk, and this is my monastery," he said, gesturing toward the sea.

He lamented how increased tourism is threatening the fragile ecosystem, especially on the islands. But here on the mainland, there's blessedly not much going on — no mud-bath spas, miniature golf or even hotels in sight. Also noticeable is the silence, except for the wind and birds.

The wet part of our walk came next, as we forged through creeks and gullies with water reaching over our knees to get to another high spot, one that would connect with the North Sea. Along the way, we saw a multitude of birds — avocets, oystercatchers, white spoonbills and plenty of seagulls, in the air and expertly walking on the mud, leaving their tiny tracks.

Back on firmer soil again, Wilbrink pointed out Engelsmanplaat, a historically significant sandbank with a bird watching tower. Located between the inhabited islands of Ameland and Schiermonnikoog, it's a popular wadlopen destination.

Tours available from other outfitters take even more adventurous wadlopers from the mainland to various islands, a rigorous 12-mile trip that involves about six hours of walking through mud and crossing even deeper gullies. My wife and I were planning to walk from a sandbar to Schiermonnikoog with a larger outfitter the next day, but that trip was canceled due to high winds and the threat of thunderstorms. 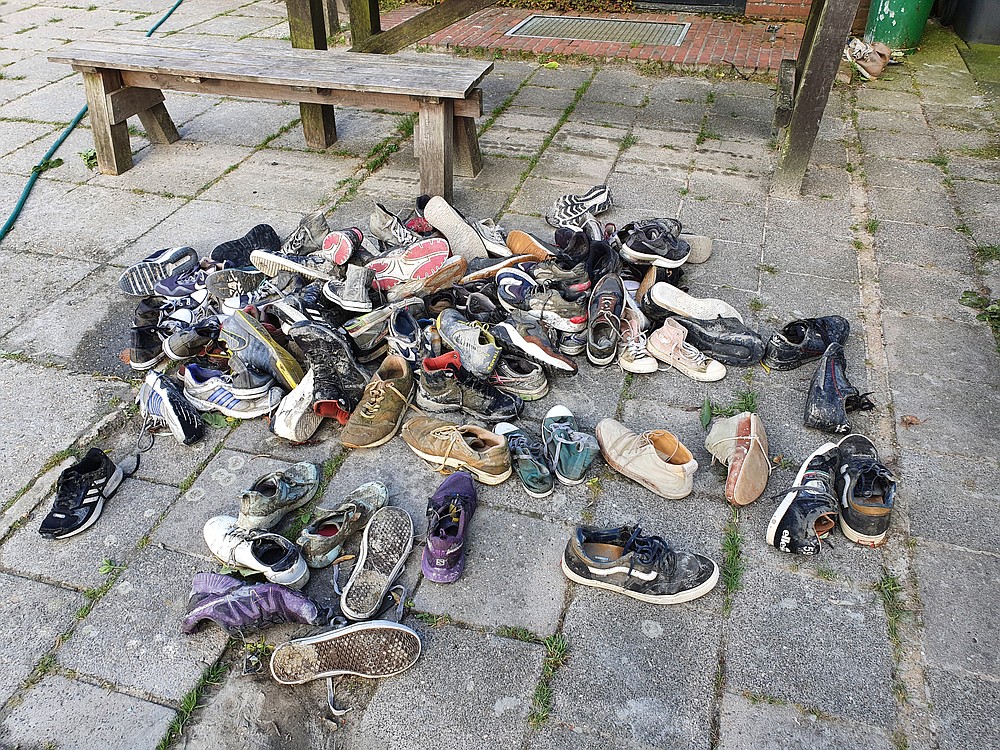 Wadlopen first caught on as a pastime in the late 1950s and exploded in the 1960s and '70s during the back-to-nature movement. At times, hundreds of people were walking the mud flats a day.

These days, there are several large organizations offering multiple trips, along with solo guides like Wilbrink. Even in tiny Moddergat, the museum offers near-daily mud walks and even an occasional combination yoga-wadlopen tour. Larger outfitters offer everything from short meanderings geared to small children to hardcore all-day outings.

While our group congregated on a sandbar before turning back, Wilbrink pointed behind us and shouted excitedly, "Zeehond!" We turned to see a seal, or "sea dog" in the distance, poking its head up in a deeper channel that led out to the North Sea. While seal sightings are not uncommon here, they're always a treat.

As we headed back, I could just keep up with the others, having nearly mastered the mud-skating technique. Walking back up the jetty, we noticed blankets of purple from blooming sea lavender ("lamsoor" in Dutch) and nibbled on stalks of salty samphire. After walking more than four miles on mostly unsteady terrain, my legs were ready for a rest. If we needed proof of our distance, we needed only to turn around. There in the mud remained the outline of our footprints, soon to be erased.