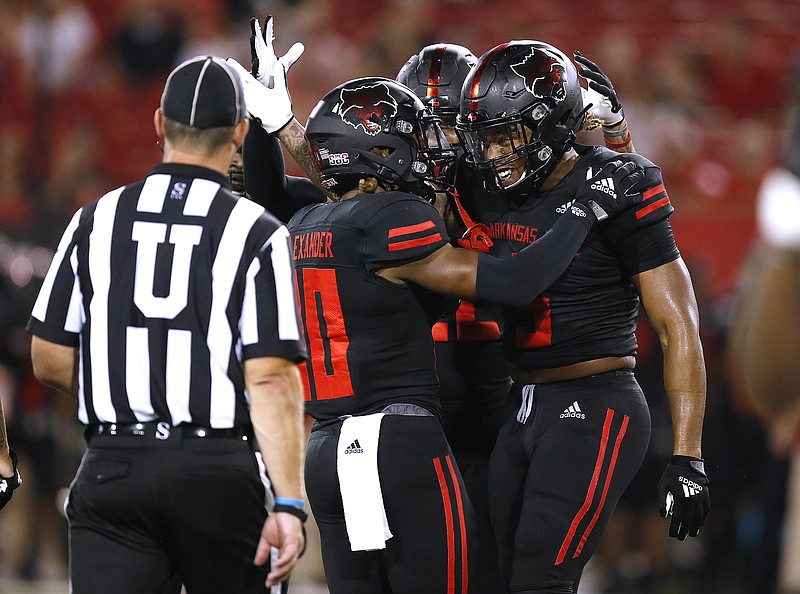 JONESBORO -- Kivon Bennett walked into the auditorium Saturday night with a duffle bag slung over his shoulder. Powerade in hand, he lifted the bag's strap over his head and tossed it down just to the side of the stage at the front of the room.

He stepped in front of the cameras, and a reporter asked the redshirt senior what it was like to be back on a football field.

Bennett couldn't hold back a smile.

"I can't even really explain," he said. "At first, I felt like I was a little rusty, but as the game went on, I definitely felt myself getting warm and back to my usual self."

So a first half in which Bennett logged two tackles for loss and led an Arkansas State defensive line that held the University of Central Arkansas to 16 rushing yards on 12 carries means the Tennesee transfer is just getting started? Well, then.

"It was just great to be back out there, not only for myself but the team environment," Bennett said. "There's nothing like the game of football when it comes to your teammates and your boys."

The Red Wolves' season opener was a continuation of things for Bennett -- albeit in red and black rather than orange and white. In his final two games with the Volunteers last fall, Bennett notched a pair of sacks in each contest, and he finished Saturday with four tackles, three TFLs and ASU's lone sack.

Of course, Bennett didn't plan on leaving Knoxville, but after being arrested Dec. 1, 2020, on multiple charges including illegal possession of both a firearm and marijuana, the Fort Lauderdale, Fla., native was dismissed from the Tennessee program. That set in motion his path to rejoining Butch Jones, the same coach who'd recruited him to play for the Vols.

"I had the game taken away from me. It's not like I stopped playing. I didn't have a choice in the matter," Bennett said during ASU's media day in mid-August. "This time away from [football] made me realize I've got to be more committed [and] more of a leader."

Bennett's presence alone was evident from the jump. The Bears constantly had to throw double teams and chips at the man coming off the left edge of the Red Wolf defensive line. If they didn't -- and even if they did -- Bennett would be past the tackle and into the backfield."

"They had a lot of passion and energy on the defensive front," UCA Coach Nathan Brown said of the Red Wolves. "We've got to establish the run, and we got knocked back early in the game."

The numbers suggest as much. Pro Football Focus graded the Red Wolves as the third-best rush defense and the second-best pass rush among Sun Belt teams, with the latter ranking 23rd out of 126 FBS teams that had played through Saturday.

And to little surprise, it was Bennett along with fellow edge rusher Joe Ozougwu who graded out as ASU's top defenders --together they combined for 13 of the Red Wolves' 23 pressures and 9 of 17 hurries.

With defensive coordinator Rob Harley's unit likely to continue utilizing heavy press-man coverage on the outside, ASU will need its defensive line to get home quickly on a consistent basis. Otherwise, things could get dicey on the back end.

The Red Wolves held up decently Saturday night. After the Bears took the lead on a 66-yard first-quarter touchdown pass, UCA had just one play of more than 15 yards until the middle of the third quarter.

The visitors continued to take their shots and hit them later in the game, completing passes of 33 and 43 yards to set up a touchdown that pulled them within a score. Despite going up against a pair of preseason FCS All-American wideouts, ASU knows the competition will only get stiffer from here.

Bennett believes there's much more to get thrown at the Red Wolves, and he'll be needed by the ASU defense all season long.