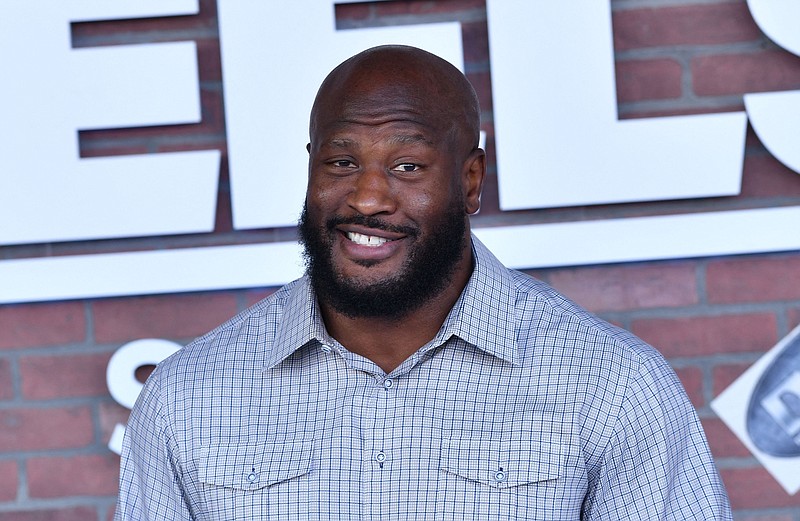 James Harrison wants to clear up a common misconception about his relationship with the media when he was a Pittsburgh Steelers linebacker.

"I had bad stage fright," the 43-year-old former NFL player said. "I didn't even want to talk to people in an interview. I wasn't mean. I was just nervous."

Toward the end of his playing career, the two-time Super Bowl champion and 2008 defensive player of the year began looking for ways to challenge himself and get over that fear of the spotlight. He decided to pursue acting with the same vigor he brought to football. After retiring in 2018, Harrison hired an acting coach and slowly began getting cast in small roles in shows like CBS' "S.W.A.T." and films like the indie "Remember Amnesia."

Now he has landed his first regular television gig on "Heels," a Starz series about a wrestling league in the fictional small town of Duffy, Ga. Harrison plays Apocalypse, a veteran of the Duffy Wrestling League who wants to see it grow and succeed as much as proprietor Jack Spade (Stephen Amell) and his brother Ace (Alexander Ludwig).

"Heels," which premiered last month on Starz, was created by Michael Waldron, creator of the recent Disney+ Marvel project "Loki." After sending in a recorded audition, Harrison said that executive producers Mike O'Malley and Peter Segal brought him in for an in-person audition before offering him the part of Apocalypse. He likened the audition process to trying out for an NFL team.

"That team got to want you," he said. "It's the same thing in acting. ... This is my first big season, regular acting gig. They liked what they saw and obviously I liked what I read."

Harrison spent about nine months during the covid-19 pandemic filming "Heels" in Atlanta. Production was pushed from March to August 2020 because of the virus. Once it started, Harrison was able to experience the "hurry-up-and-wait" element of working in Hollywood. He recalled one day where he was on set from 8 a.m.-8 p.m. and didn't shoot anything.

He has really embraced the competitive nature of acting, although his opponent isn't any of his co-stars.

"I didn't have to actually physically demand my body to do something or manually make my body do something. It was just me against me."

Playing a wrestler requires training similar to what Harrison did during his long NFL career and has continued through intense workouts, many of which end up on his Instagram page.

"I love to work out," he said. "That's just something that's in me. I think my love for working out is just a little bit less than my fear of getting fat. When that day comes when I don't want to come into the gym, it'll be like, do you want to get fat?"

Wrestling was a big part of Harrison's life as a kid; he loved to try out new moves in his family's living room. After he was cast in "Heels," he did a lot of reading and watched documentaries about professional wrestling — particularly the independent scene — that helped him get "back into the understanding and feel of what it was."

Though Apocalypse didn't have much to do in the "Heels" pilot, Harrison said that viewers will find out more about the character as the season goes on.

"He's more of a mentor, big brother figure," he said. "He's a character that's loyal to the DWL who's been around a couple decades. They stuck with him through his rehab stint. That's where his loyalty comes from to the Spade family."

Apocalypse is a wisecracking, mostly calming presence in the first episode, but there's nothing peaceful about the wrestling moves he and the rest of the cast are performing. Harrison said that he does 100% of his own stunts and estimated that his co-stars did at least 85% of theirs as well.

Even though the wrestling moves are scripted, "you're going to feel all the same pain as a real wrestler," he said, noting that Amell suffered a back injury during filming that sidelined him for a few weeks.

"You're just putting on a show and making it look as painful as possible but doing it as safely as possible," Harrison said.

He has been so focused on his TV work that he said he hasn't been paying much attention to the 2021 Steelers. He's rooting for them though, and he hopes Steelers Nation will tune in to "Heels."

"I don't want them to have any expectations or anything like that. I want them to watch. Go get your Starz and watch."