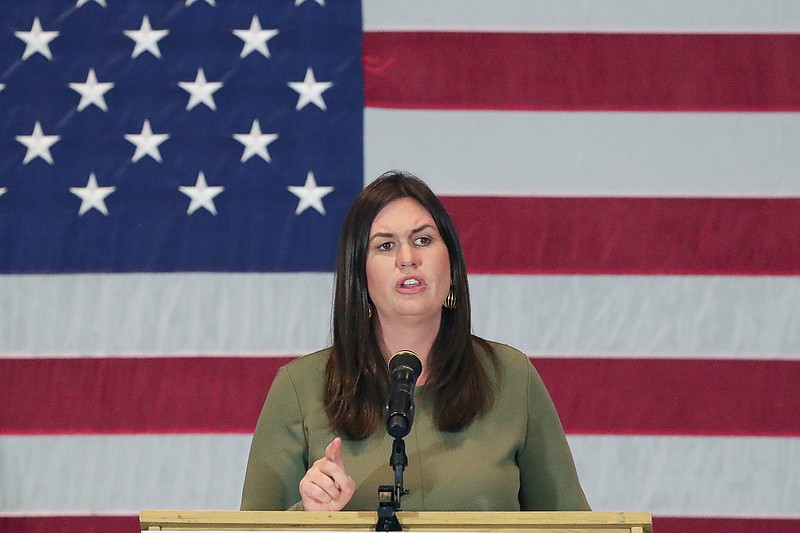 BENTON -- Republican gubernatorial candidate Sarah Huckabee Sanders said Monday that she would be a compassionate leader working to improve the state and a fighter pushing back against "the radical left" in Washington, D.C.

Sanders said she is running for governor in part "because I am tired of watching Arkansas compete at the bottom."

"I am tired of being 47th, and 48th and 49th when I know that we have the capacity and the potential to be first or second, so we need real leadership to take us there," she said as part of what she has billed as the 15-stop Freedom Tour that ends Saturday in Springdale with a pancake breakfast to honor the nation's heroes.

Sanders said she also is running for governor because she wants to make sure the path of every child in the state "is free and clear so that they can run full-speed toward whatever it is they want."

She acknowledged that she is nationalizing the election.

"Because if you are not, you are missing what is happening in our country," Sanders said.

"We have people in Washington in leadership, the radical left, that are not OK just changing policy. They want to fundamentally change who we are as a country, and we cannot sit back and do nothing and allow that to happen," she said in remarks that drew applause from the audience.

Sanders said she is not remotely scared of the fight against Washington. "I have been doing it for the last four years and winning."

Sanders, of Little Rock, is one of two announced Republican candidates for governor in 2022. The other is Attorney General Leslie Rutledge of Maumelle.

The filing period for candidates for state and federal offices in Arkansas is scheduled for Feb. 22, 2022, through March 1, 2022, with the primary election May 24 and the general election Nov. 8, 2022.

Republican Asa Hutchinson has served as governor since 2015. He is term limited and barred from running for reelection.

Prior to Sanders' remarks, her father, former Gov. Mike Huckabee, said his daughter has always been a leader and has genuine, authentic core convictions in her soul. He said she doesn't need to take a poll to decide what she believes to make some people happy.

"Our state will do very well when Sarah Huckabee Sanders becomes the next governor of Arkansas," Huckabee said.

In fact, he said he believes she will be the best governor Arkansas has ever had.

After her remarks, Sanders met with people in the crowd who wanted to talk to her, so she wasn't available to respond to reporters' questions within 30 minutes of her speech.

In mid-May, Sanders tweeted that she wants to eventually get rid of the state's individual income tax.

Sanders tweeted that "At a time DC Democrats are raising taxes and paying workers to stay home, we need to begin phasing out the state income tax. When I'm governor I will lead the effort to reward work, not penalize it."

A few days later, Rutledge announced that she signed the Americans for Tax Reform's Taxpayer Protection Pledge to demonstrate that she "will work toward strong, common-sense proposals such as eliminating the state income tax to bring economic prosperity to Arkansas." She pledged not to raise taxes while she is governor.

In July, Rutledge announced that she plans to try to get on the 2022 general election ballot a proposed constitutional amendment that would eliminate the state's individual income tax and to ax the income tax over an eight-year period.

Two weeks ago, Rutledge said she plans to roll out her plans in the next few months to cut state government budgets to pay for axing the individual income tax.

Legislation that would have cut all individual income tax rates, effective Jan. 1, 2022, would have led to a $3 billion reduction in state general revenue in fiscal 2023 based on the net tax amounts reported on 2019 returns, according to the state Department of Finance and Administration.

Hutchinson has proposed a general revenue budget of $6.01 billion for fiscal 2023, with an additional $54.9 million to transfer to a long-term reserve fund, according to a finance department spokeswoman.

Sanders announced her bid for governor in late January. Rutledge launched her campaign in July 2020.