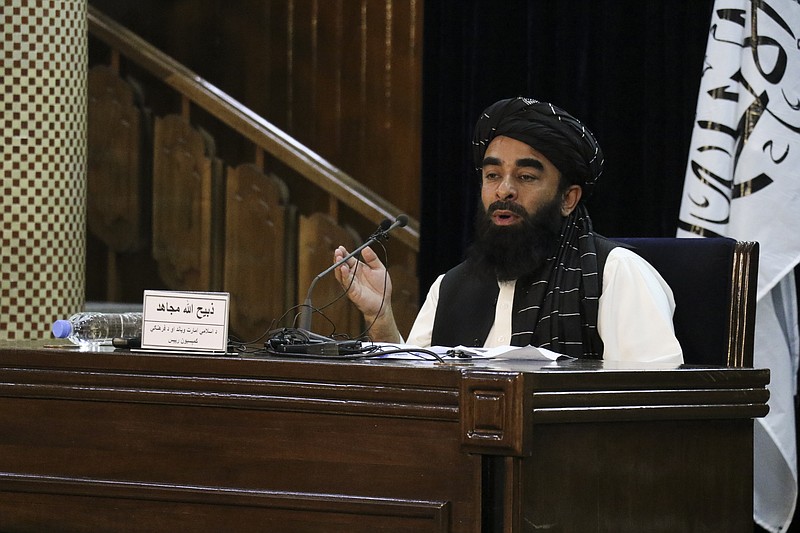 DOHA, Qatar -- The Taliban on Monday seized Panjshir province, a restive mountain region that was the final holdout of resistance forces in the country, cementing the group's control over Afghanistan a week after U.S. forces departed.

"Panjshir province completely fell to the Islamic Emirate of Afghanistan," Zabihullah Mujahid, the Taliban's spokesman, wrote in a statement on Twitter.

If the Taliban manage to keep Panjshir under control, it would be a symbolic capstone to the group's lightning-quick conquest and return to national power.

Mujahid later sought to assure residents of Panjshir that they would be safe -- even as scores of families reportedly fled into the mountains ahead of the Taliban's arrival.

"There is no need for any more fighting," he said at a news conference in Kabul. "All Panjshir people and those who live in Panjshir are our brothers and they are part of our country."

[Video not showing up above? Click here to watch » https://www.youtube.com/watch?v=2aGGjoWuspQ]

A senior official of the National Resistance Front of Afghanistan, who spoke on condition of anonymity because of the sensitivity of the matter, confirmed that the Taliban had taken over. "Yes, Panjshir has fallen. Taliban took control of government offices. Taliban fighters entered into the governor's house," the person said.

The official added that Amrullah Saleh, a senior anti-Taliban leader who had served as vice president of the ousted government, had fled for Tajikistan.

But on Twitter, the front said its forces remained "in all strategic positions across the valley to continue the fight" and that the "Taliban's claim of occupying Panjshir is false."

And in a video recorded Friday, Saleh said reports at the time that he had fled the country were "totally baseless," although he added that the situation was "difficult."

The Taliban's victory Monday followed an extended period of heavy fighting between resistance guerrillas and Afghanistan's new rulers. Resistance fighters set up a base in the Panjshir Valley days after the Taliban seized control of Kabul last month, determined to hold a valley that was never conquered by the Taliban in the 1990s nor by the Soviet Union in its nearly decade-long occupation in the 1980s.

Taliban assaults in recent days had killed "a record number of people and resistance forces," including his own family members, he said. He accused the Taliban of using foreign fighters and said a country ruled by the group would be "isolated, in darkness, away from art."

Certain members of the resistance continued to deny Monday that the Taliban had occupied Panjshir. The National Resistance Front said in a Facebook post that "the people of Afghanistan should be assured that the resistance will continue until the freedom and justice is achieved by God's help."

Mujahid said the Taliban would announce a new government "within days" -- one that would be inclusive, he said, without elaborating.

He said Afghan troops who had been trained by Western governments in the past two decades would be asked to rejoin the country's security forces alongside Taliban fighters. Some Afghan soldiers are among those who fled to Panjshir after the Taliban seized Kabul.

"The forces that were trained by the previous government must rejoin," he said. "In the upcoming system, all the forces that were previously trained and are professional will be reintegrated with our forces, because our country needs a strong army."

Mujahid also said that Haibatullah Akhundzada, the hard-line cleric who leads the Taliban, "is alive [and] we will see him soon." Akhundzada is expected to be named the country's supreme leader.

Asked what rights women would have under the Taliban, Mujahid promised all women would eventually be "asked to return" to their jobs.

The Taliban have claimed unspecified "security reasons" are behind the current slow pace of women's return to their workplaces, and also behind restricting women to their homes unless accompanied by a male guardian. But many who remember their previous rule are skeptical, and the issue was again in the spotlight over the weekend.

A policewoman was beaten and shot dead by Taliban militants in front of relatives at her home in central Ghowr province Saturday, the BBC reported, citing eyewitnesses. The Taliban denied killing the woman -- who, according to reports, was eight months pregnant -- and said it was investigating the incident.

Separately, a Taliban spokesman told the Guardian that the group had detained four men who allegedly struck female protesters during a Saturday demonstration against the Taliban's extreme interpretation of Islamic law, which sharply curtails women's political rights.

As the Taliban swept to power, the group sought to convince skeptics that it wouldn't return to the harsh rule it imposed when it last controlled the country, from 1996 to 2001. The latest developments add to recent reports of reprisal killings across the country. The array of human rights concerns could make it harder for the Taliban to persuade world leaders to resume the flow of foreign aid that has largely been frozen since it took over Afghanistan.

Taliban officials met in Kabul on Sunday with the United Nations undersecretary general for humanitarian affairs, who promised to maintain assistance for the Afghan people, Taliban spokesman Suhail Shaheen said.

The head of the International Committee of the Red Cross also arrived in the country Sunday to visit aid operations. In a video message, Peter Maurer said he would talk to authorities about ensuring that "neutral, impartial and independent humanitarian action" continues.

On Monday, a Taliban spokesman tweeted that Maurer met with officials in Kabul.

The U.N. has warned of an impending humanitarian crisis in Afghanistan, where foreign aid made up much of the previous Western-backed government's budget.

On Monday, meanwhile, the State Department helped four U.S. citizens leave Afghanistan over ground, a senior State Department official said, marking the first overland evacuation it has facilitated since the U.S. military withdrew from Afghanistan. The Taliban were aware of the operation and did not impede their safe passage, said the official, who spoke on condition of anonymity to discuss a sensitive mission.

The four Americans were part of the group that Rep. Markwayne Mullin, R-Okla., had initially tried to evacuate from the country, the official said. Ground evacuations represent a rare option for leaving the country until they can resume at Kabul's airport.

The departures happened just before Secretary of State Antony Blinken arrived in Qatar, which has become a transit point for more than 55,000 people fleeing Afghanistan and resettling in the United States and elsewhere. Top aides to Blinken said the trip is designed to express gratitude for the work U.S. and Qatari officials have done in the evacuation effort, but it also comes as the Biden administration faces an array of challenges related to Afghanistan.

In Mazar-e Sharif, airplanes with Americans and interpreters have been waiting on the ground for days amid conflicting reports that they are being held up either by the Taliban or awaiting State Department clearance.

Rep. Michael McCaul, R-Texas, said on "Fox News Sunday" that the planes were waiting for clearance from the Taliban in what he described as "a hostage situation." He said American citizens and Afghan interpreters were being kept on six planes.

He did not say where that information came from, and it was not immediately possible to verify it.

A State Department spokeswoman said the department no longer has personnel on the ground, and it doesn't control the airspace, "whether over Afghanistan or elsewhere in the region."

"Given these constraints, we also do not have a reliable means to confirm the basic details of charter flights, including who may be organizing them, the number of U.S. citizens and other priority groups onboard, the accuracy of the rest of the manifest, and where they plan to land, among many other issues," the spokeswoman said.

Meanwhile, the Taliban say they are working to repair Kabul's airport, where only domestic flights have resumed and just during the day.

Technical experts from Qatar and Turkey have begun repairs, though it's not clear when the airport will be up and running.

Information for this article was contributed by Siobhan O'Grady, Rachel Pannett, Haq Nawaz Khan, Ezzatullah Mehrdad, Susannah George, Shaiq Hussain and Sammy Westfall of The Washington Post; by Kathy Gannon, Rahim Faiez and Matthew Lee of The Associated Press; and by Sami Sahak, Wali Arian and Jim Huylebroek of The New York Times.