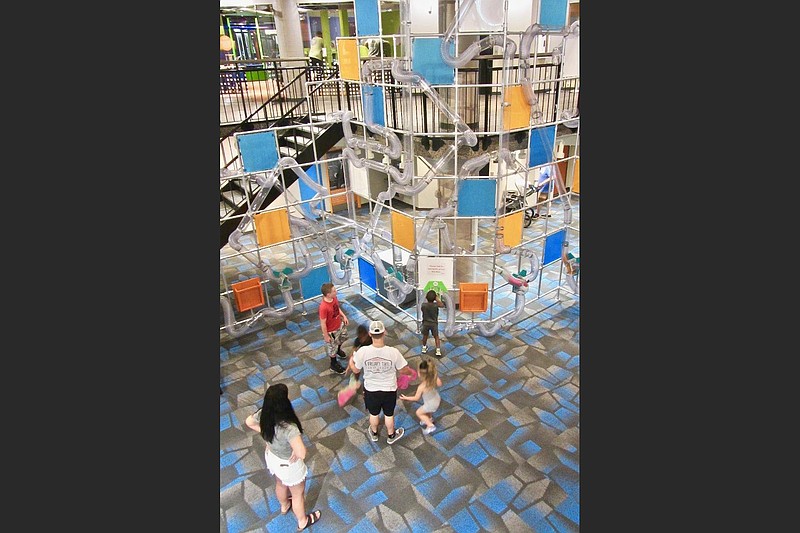 The Museum of Discovery’s Whoosh tower is a popular attraction. (Marcia Schnedler/Special to the Democrat-Gazette)

First came the pandemic. Then followed the flood. That one-two punch of disasters kept Little Rock's Museum of Discovery closed for a total of 40 weeks before the popular family attraction managed a buoyant second reopening last month.

An Aug. 28 visit found a mix of families enjoying the two levels of exhibits. The hands-on activities, some old and others new, offer a blend of facts and fun. That one-two combination has earned the site a ranking by USA Today readers as the nation's sixth best children's museum.

Familiar displays getting lots of action included Whoosh, where youngsters propelled scarves through pneumatic tubes; Amazing You, a series of interactive panels about the human body; and Room to Grow, an assortment of hands-on activities for youngsters 6 and younger.

Among newly installed activities, Land the Shuttle was busy with children landing a miniature version of the space vehicle. Other freshly installed exhibits include Mystery of the Mayan Medallion, Magnificent Me and How People Make Things.

"It was truly joyous to welcome our public guests back to the museum," says Chief Executive Officer Kelley Bass. "While we must wait for some new exhibits to be designed and built, we are back to something more normal than anything we've felt in 18 months. And we are positioned to be an even better museum than we were."

Like most public facilities, the Museum of Discovery closed in March 2020 as the covid-19 pandemic spread. The museum reopened three months later, with masking and other precautions. Then a February freeze burst several boiler pipes on the roof, causing about $7 million in damages from gushing water. About two-thirds of the exhibits were destroyed. 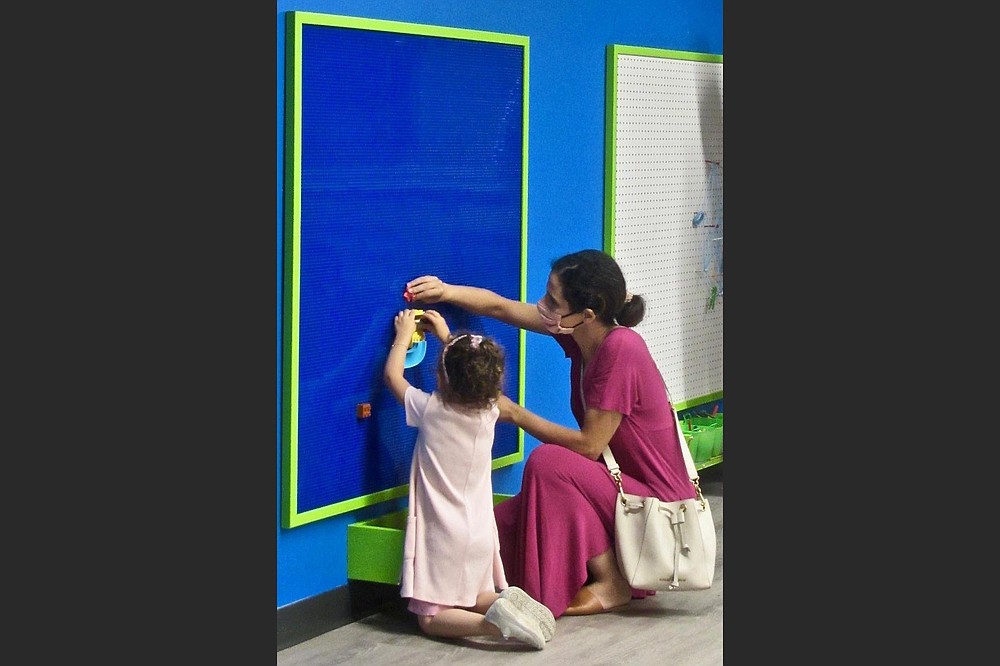 Adults and children get to work together in some exhibit areas. (Marcia Schnedler/Special to the Democrat-Gazette)

"I love the people I work with," Bass says. "And making sure they get paid is part of my responsibility. Thanks to federal help — the Paycheck Protection Program and the Shuttered Venues Operators Grant — we have been able to do just that. However, we've also had to burn through a fairly significant part of our cash reserves. But we've made it. We're not broke. We will survive — and thrive."

The museum has contracted to build two new galleries, Science Lab and Dynamic Earth, targeted to open in summer 2023. Also on the drawing board is a three-story climbing structure to go up where the Whoosh now stands. The Whoosh will be moved to the Room to Grow gallery.

Surviving exhibits include a timeline noting that this is Little Rock's oldest existing museum. Founded in 1927 by prominent author Bernie Babcock, it was initially on Main Street and called the Museum of Natural History and Antiquities. It was moved to City Hall in 1929, but had to close in 1935 during the Great Depression.

Reopened in 1942, it spent more than a half-century in the Tower Building at MacArthur Park before moving in 1998 to the present River Market site under the new Museum of Discovery name.

A decade later, the Donald W. Reynolds Foundation gave a $9.2 million grant for an expansion. When the larger museum reopened in January 2012, nearly all of the 90 new exhibits were hands-on. Eight years later came covid-19, followed by the flood.

Among survivors of the deluge is a sign that greets visitors about to enter the exhibit areas. It proclaims the museum's continuing mission: "To ignite a passion for science, technology, engineering, arts and math in a dynamic, interactive environment."

The Museum of Discovery