On 9/11, grounded flights brought to Little Rock up to 2,500 passengers asking 'What am I doing here?' 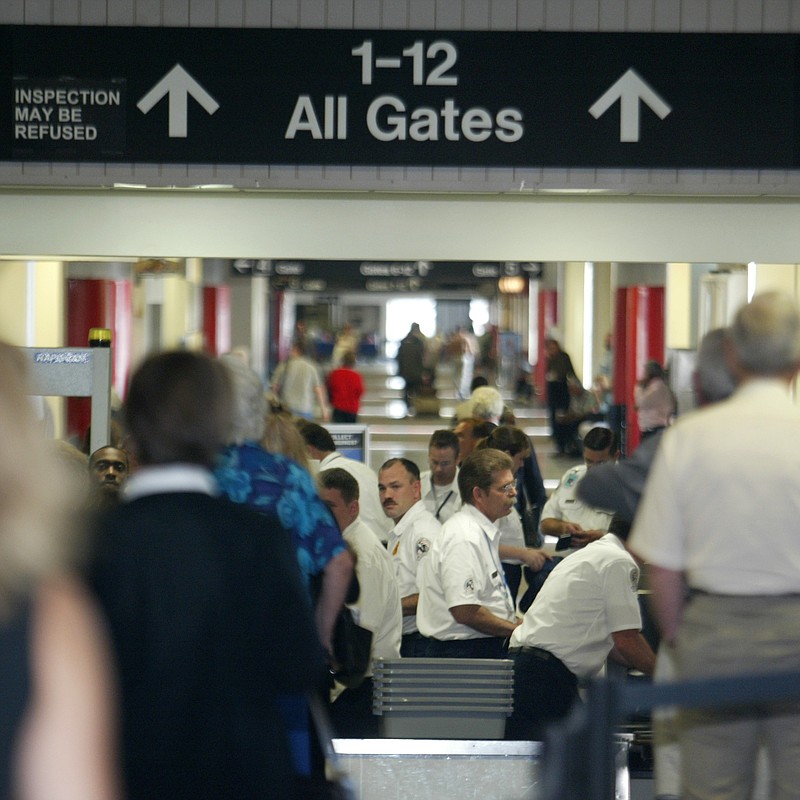 Arkansas Democrat-Gazette/STATON BREIDENTHAL --10/1/02--Transportation Security Administration(TSA) federal passenger screeners check passengers at the Little Rock National Airport Tuesday morning. Yesterday was the first day for screeners hired and trained by the TSA to be on the job at the Little Rock airport.

When the Federal Aviation Administration shut down the nation's airspace system on Sept. 11, 2001, the unprecedented move abruptly interrupted the journeys of 4,000 airliners and their passengers.

Shutting it down was the only call after terrorists deliberately flew two airliners into the World Trade Center towers earlier that morning in New York and another into the Pentagon in Arlington, Va. A fourth, believed to have been intended for the nation's Capitol, fell into a Pennsylvania field.

No one knew whether there would be more terrorism using hijacked airliners. There wasn't, it turned out, but the FAA wasn't taking chances.

Pilots were ordered to divert to the closest available airport. More to the point, they were ordered not to provide passengers with the reason for the diversion.

What was then called Little Rock National Airport, Adams Field, wound up with more than two dozen aircraft, which then disgorged more than 2,000 stunned passengers suddenly stranded in an almost equally stunned city.

The city's mayor at the time, Jim Dailey, was at the monthly meeting of the Little Rock Regional Chamber of Commerce's board that Tuesday morning when someone came up to him and whispered that "there's been a big airplane, a jet, that crashed into the World Trade Center."

Dailey went through the same mental calculus many did when they heard the news.

"Your first thought on something like that -- at least mine was -- there's been an accident of some sort," he recalled in an interview last week. "You don't think about terrorism."

"We know this is not just an accident anymore."

[Video not showing up above? Click here to watch » https://www.youtube.com/watch?v=PrTwoD11o_E]

In all, 2,977 people were killed in the attacks that day, according to the 9/11 Memorial and Museum in New York.

The collective acts of terrorism changed everything for airports. Today, people routinely go through a phalanx of security checkpoints at the airport before they board a plane. Their checked bags are scrutinized with special equipment, all part of the homeland security apparatus spawned by the attacks 20 years ago.

But while the crude examples of that apparatus began appearing within months, it would take billions of dollars and many years to advance in technology from those early days, and the pressing issue for Dailey and others on that morning was how would the city be affected.

That it was a terrorist attack "kind of threw me into a little different engagement to visit with our folks and go out to the airport and say what are we doing to be sure we are prepared for whatever the outcome is," Dailey said. "Very quickly we began to get the information that the FAA was grounding all airplanes and that we were going to get a barrage of airplanes coming into Little Rock National."

Deborah Schwartz had just dropped off her daughter at school and was on her way to work. She was in her seventh year as executive director of the state's largest airport.

Schwartz still recalls precisely where she was when she heard the news of the aircraft crashing into the World Trade Center. She was traveling east on Interstate 630 between South University Avenue and Fair Park Boulevard.

She initially wondered if she was hearing a modern version of the 1938 radio performance of "War of the Worlds," a show her father remembered.

"I was incredulous," she said.

On her agenda that Tuesday morning was a 9 a.m. meeting of the Little Rock Municipal Airport Commission. It became readily apparent that Schwartz and her staff would have more pressing matters that morning.

The commission meeting was canceled, she remembered, and Schwartz and her staff wound up monitoring the "horrific events" on a television set in small conference room at the airport.

"We were getting constant communication from the FAA," she said. "They were shutting down the airspace and in a matter of hours, that morning, we had 26 aircraft parked at our 13 gates or out on the tarmac and a terminal full of now nonflying passengers, ones who had come to fly out, and also disembarked passengers, the latter who had no idea what had happened because the pilots had been instructed not to share in the air what was going on."

The passengers who were dropped into Little Rock without warning were stunned.

"They were milling about wondering why they were in Little Rock. You know, 'What am I doing here? I am supposed to be there,'" Schwartz said.

The terminal was surreal.

"In a regular airport environment, you will always witness a range of emotions and temperaments in a terminal covering the gamut from catatonic to exuberant to distraught," Schwartz said. "And passengers from no to endless financial means. The difference that day were the reactions of the disembarking passengers as they learned what had brought them to Little Rock."

Like the "would-be bride" she remembered walking through the terminal.

"She was holding her fully-bagged wedding gown over her head with one arm," Schwartz recalled. "She was saying, 'I'm supposed to be getting married. What am I doing here?'"

Or the young man, who may not have had any means beyond his airline ticket, "soliciting some change in order to make a phone call when a pay phone became available."

"How the entire airport staff, the airlines and concessions, Little Rock leadership, civic organizations, media and residents quickly acted to help the stranded passengers as the day's events continued to unfold absent any concept of the outcome or the repercussion -- the way they responded to unfathomable events happening before our eyes," she said.

With no more flights in the offing, passengers went to Plan B -- renting a car. They were quickly gone. Again, the local population helped fill the gap, which struck Schwartz as amazing.

"When that was publicized, private residents, unsolicited, came to the airport to give people rides to the hotels or wherever they wanted to be or go," she recalled.

This was in the days when one could park at the terminal curb and leave a vehicle unattended.

"People would come up, park on the curb and just walk around the terminal trolling for people who needed rides somewhere," she said.

Not everyone got a rental car or had anywhere to go in a private car, especially if they were flying from, say, Buffalo, N.Y., to Jackson Hole, Wyo., as one woman stranded in Little Rock had started her day. They wanted to go home.

Schwartz noted many passengers spent several nights in the airport, not knowing when airline flights would resume.

"The airlines and the concessions offered cots and blankets and food to passengers who temporarily camped out in the terminal, but for several days people were waiting to see if, 'Am I going to, like, get to fly again?'" she said. "People were there for days."

Johnny Seiter missed the news. The Little Rock business executive already had taken off for a business trip to Indianapolis. He had a layover in Atlanta.

But he and other passengers began to realize something was amiss when the pilot announced the flight -- and all other flights -- were being grounded. Seiter said he is uncertain now whether the pilot said it was an emergency.

Once the aircraft landed, everyone began to get sometimes spotty cellphone coverage and put together enough information to conclude there was an attack of some kind involving a plane, Seiter said.

"Everybody was getting bits and pieces," he said. "It was slowly coming."

They remained on the tarmac for two to three hours before they were able to get off the plane.

Seiter said he will never forget when he stepped from the plane into the terminal and saw what was playing on the television monitor.

"They were replaying the plane hitting the twin towers," he said.

Seiter said he also was taken aback by the military presence at the Atlanta airport. Armed combat soldiers roamed the terminal. Humvees were stationed outside.

And no one was allowed to drive into the airport to pick up anybody.

Seiter said he lucked out when he met up with a business colleague from Atlanta who was at the airport for his own business trip. Seiter, sans luggage, was able to stay with his colleague until airlines were allowed to resume operations.

Airline travel eventually resumed. Carefully. Little Rock National was among the first commercial service airports in the FAA's Southwest Region to pass a security review, allowing it to reopen.

A Comair flight to Cincinnati with seven paying passengers aboard took off for Cincinnati on Thursday afternoon, according to news accounts. Several other aircraft took off or arrived, mostly to be re-positioned.

Seiter arrived in Little Rock on Thursday on one of the first flights out of Atlanta, only after he had sorted through thousands of pieces of mostly black luggage to find his own piece of black luggage.

"It was amazing how many people were there," he said. "That was the only way."

And Seiter is always reminded of the trip home 20 years ago when he goes through the Atlanta airport, typically one of the world's busiest.

Not on that day.

"I got on a tram after I got through ticketing and I rode that tram all the way to the B or C concourse and I didn't see one person," he recalled.

Most airports, especially the larger hub airports, such as O'Hare International Airport in Chicago, needed more time to reopen.

That was just the first week. Schwartz would go on to work 47 consecutive days.

She recalled being "really energized by the responsibility of responding to just the unimaginable events of that day and wondering what would be the new normal going forward."