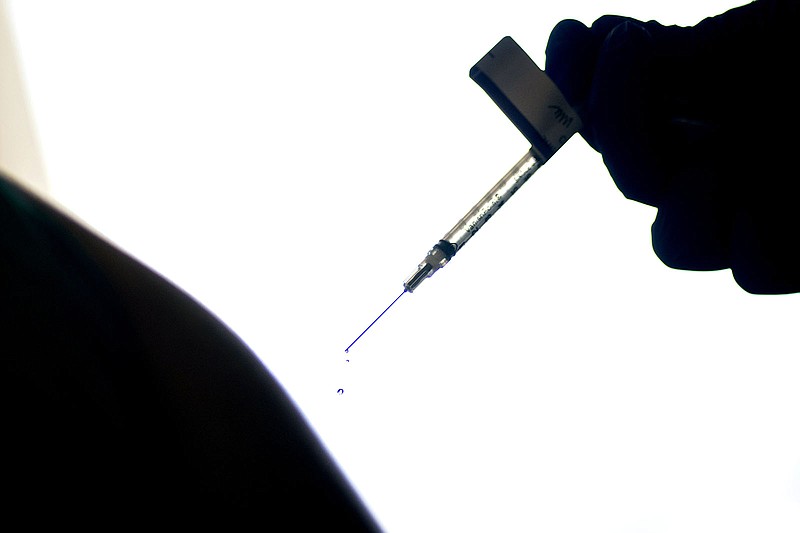 FILE - In this Dec. 15, 2020, file photo, a droplet falls from a syringe after a health care worker was injected with the Pfizer COVID-19 vaccine at a hospital in Providence, R.I. (AP Photo/David Goldman, File)

Little Rock officials on Tuesday announced a plan to provide up to $100 in Visa cash cards to people who receive covid-19 vaccinations at city-sponsored clinics.

The reward cards will be provided through a contract with U.S. Bank, a city spokesman said. They can be used like cash or a debit card anywhere Visa cards are accepted.

Funding for the incentive program will come from the initial tranche of direct aid the city has received as a result of the American Rescue Plan Act, which President Joe Biden signed in March.

The city Board of Directors on Aug. 3 approved a spending resolution that laid out how officials want to use about 60% of the first batch of aid received in May.

Among other objectives, the resolution authorized using up to $700,000 on covid-19 prevention, mitigation and communications efforts, including vaccination incentives.

Little Rock has received nearly $19 million from the federal government out of an expected $37.7 million total, the largest allocation out of all the cities in Arkansas receiving aid. The second half of the money is set to arrive next year.

People will receive a $50 card upon receiving each dose of the two-dose covid-19 vaccines at coming clinics hosted by the city, Little Rock spokesman Spencer Watson said during a news conference Tuesday held over Zoom.

Participants who already have received a first dose at any other clinic will get a $100 reward card once they receive a second dose at a city-sponsored clinic if they show proof of the first dose, he said.

People who receive the single-dose Johnson & Johnson vaccine will get a $100 reward card right away, Watson said.

Based on data from Thursday, Little Rock's vaccination rate was about 46%, he said.

First and second doses of the Pfizer-BioNTech vaccine will be offered this Saturday from 1-5 p.m. at the Southwest Community Center and again 1-5 p.m. on Oct. 2.

Another clinic at the West Central Community Center will offer first and second doses of the Moderna vaccine, as well as the single-dose Johnson & Johnson, on Nov. 6 from 1-5 p.m. and again on Dec. 4 from 1-5 p.m.

When asked if any city departments have instituted vaccination mandates or directives, Watson said he was not aware of any at this time.

The city's intergovernmental relations manager, Emily Jordan Cox said during the news conference that she could not provide an exact figure in terms of the money expended on the reward cards. However, Cox said "several hundred" cards have been purchased so far in $50 and $100 increments.

"We want to be conservative on our spend, of course, in the event that residents don't take advantage of the incentives," she said.

According to a city news release issued Tuesday, if a particular clinic does not have enough reward cards to meet the demand, people can opt to either receive the card in the mail or pick up the card later.