Meals under 30: 5 recipes that can be cooked, from start to finish, in half an hour or less 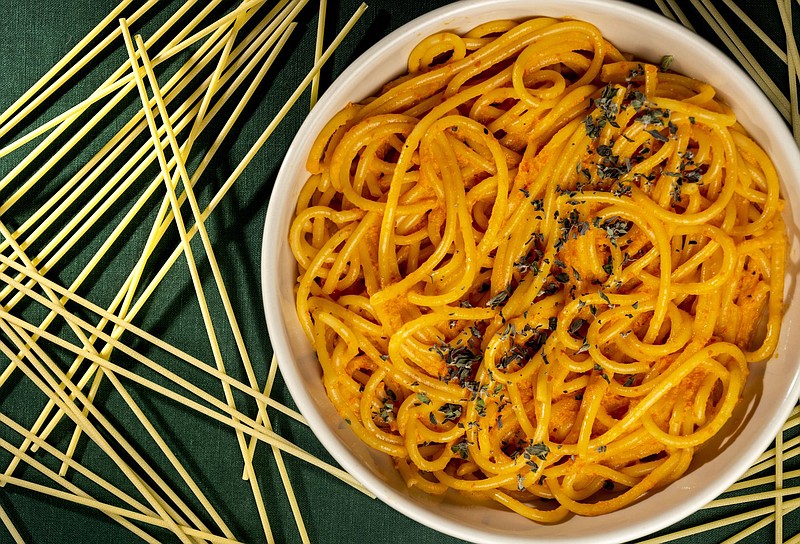 Some days, you just don't feel like cooking lobster thermidor aux crevettes with a Mornay sauce, garnished with truffle pate, brandy and a fried egg on top.

Some days, you want to cook something easy. Something fast.

Not throw-a-frozen-block-of-something-into-the-microwave-and-hope-for-the-best fast. I'm talking about a delicious, satisfying, homemade entree in 30 minutes or less, from start to finish.

I happen to have five such dishes right here. They are sure to join your weeknight cooking rotation — but honestly, they are all good enough for weekend cooking, too.

I should warn you, though, that some of them require a bit of time management to keep them under a half-hour. While part of the dish is cooking, you may have to be chopping or otherwise prepping some of the other ingredients.

This requirement is a deviation from the standard mise en place method of cooking, in which all the ingredients are prepared before the cooking begins. That method works best, in general, and ensures there will be no unforeseen problems. But it does not save as much time as prepping while cooking.

For instance, I made poached salmon. The fish gets much of its flavor from the liquid in which it is simmered, the court bouillon, and that gets its flavor from a number of ingredients that have to be prepped.

So you just have to put it together methodically. While you're gently cooking chopped onions, peel and chop a carrot. Add it to the pan, and chop a rib of celery. While that cooks, peel and chop a few cloves of garlic, and so on. Before you know it, you'll have a highly flavored court bouillon to bring a complex depth to a luscious piece of salmon.

But don't stop there. The salmon only takes a few minutes to cook, and you can take that time to make a wonderful flavored mayonnaise to serve with the fish. Either dill mayo or lemon will do. I made both; it's nice to have a choice.

One key to making dinner in less than 30 minutes, of course, is to choose food that doesn't take long to cook. For pork, that means the tenderloin or chops.

I made chops, but not just any chops. I made Easy Honey Garlic Pork Chops, which are seared, then glazed, then broiled.

There isn't a particular secret to this dish, but if there were one it would be that the chops are first fully cooked on the stovetop before the glaze is applied — or even before it is assembled, if you choose — and before it is broiling. It is broiled for just a minute or two, enough time to make the honey glaze adhere to the meat and to char the edges just a bit.

The pork comes out blissfully juicy, with a delightful sweet-and-sour edge.

For my vegetarian option, I chose a pasta dish that looks as good as it tastes, and it tastes absolutely amazing. The pasta almost glows with a vibrant red sauce — but it doesn't have any tomatoes.

Instead, the extraordinary color of Bucatini With Bell Pepper Sauce comes from red bell peppers, though you could also use yellow for a different, equally appetizing appearance. Frankly, I'd stay away from green bell peppers for this one.

While a big pot of water for your pasta heats to a boil, you can chop the peppers, onions and garlic. You can chop them roughly, which will save some time, because after they are sauteed they will all be blitzed together in a blender or food processor. Meanwhile, you can be cooking the bucatini or other long pasta that holds sauce well.

Chicken piccata was next. In my relative youth, it used to be my go-to order at Italian restaurants. It was as superb as I remember.

It also comes together in almost no time at all. You simply pound chicken filets flat until they are an even thickness. Dredge them lightly through flour, pan-fry them lightly in just enough olive oil, and then whip up a quick sauce with garlic, white wine, capers, butter and lemon juice.

It's a simple dish, and sometimes simple is best.

My final entree is Chuckwagon Chili, a liquid-free variation on one of my own favorite recipes for chili. The version I make is an adaptation of a Betty Crocker recipe, I'm embarrassed to say, and one of the biggest adaptations I make is to add liquid. So the liquid-free version is actually pretty close to Betty Crocker's, with the addition of smoked paprika and a much shorter cooking time.

I am perfectly aware that she never existed, but that Betty Crocker sure knew what she was talking about. This is a hearty, meaty chili, with a perfect balance of spices. And by not draining the tomatoes or beans, the ingredients create enough liquid of their own, so you don't even have to add the liquid I've been adding all this time. 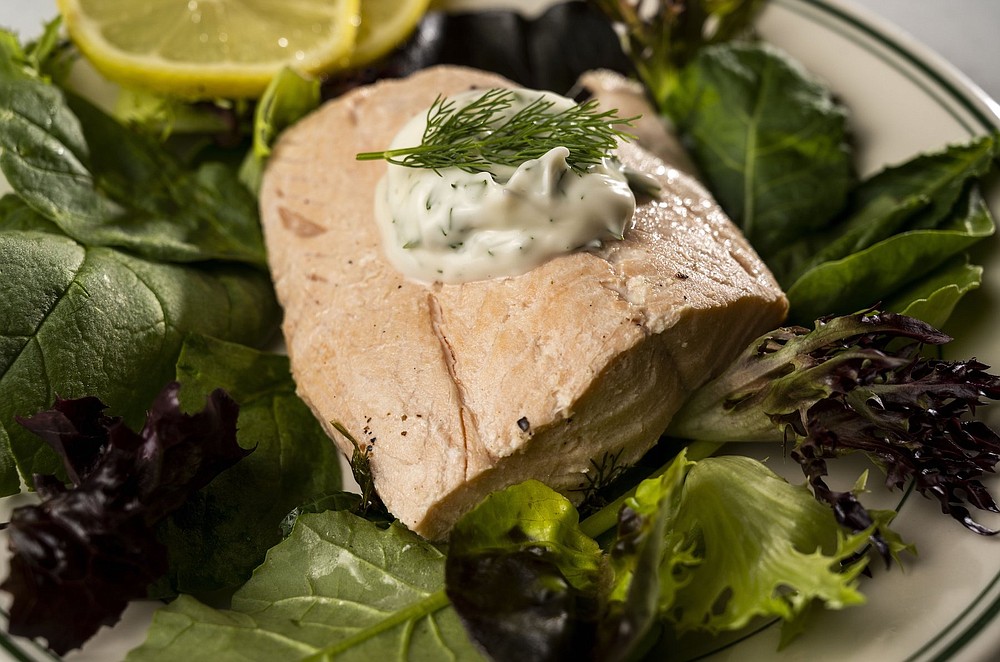 Poached Salmon with a dill mayo sauce on a bed of greens (TNS/St. Louis Post-Dispatch/Colter Peterson)

Add parsley, thyme and 4 sprigs of dill. Stir in bay leaf and peppercorns. Add enough water to cover salmon, when it is added. Add wine, raise heat, and bring to a simmer. Gently lower in salmon (you may have to do this in batches) and cook at a light simmer until fish is opaque and flakes easily, about 5 minutes or longer, depending on the thickness of the fish.

Meanwhile, make a sauce by combining mayonnaise with remaining tablespoon of dill or lemon juice.

When fish is done, gently remove from liquid with a spatula and serve with mayonnaise sauce on top or on the side. 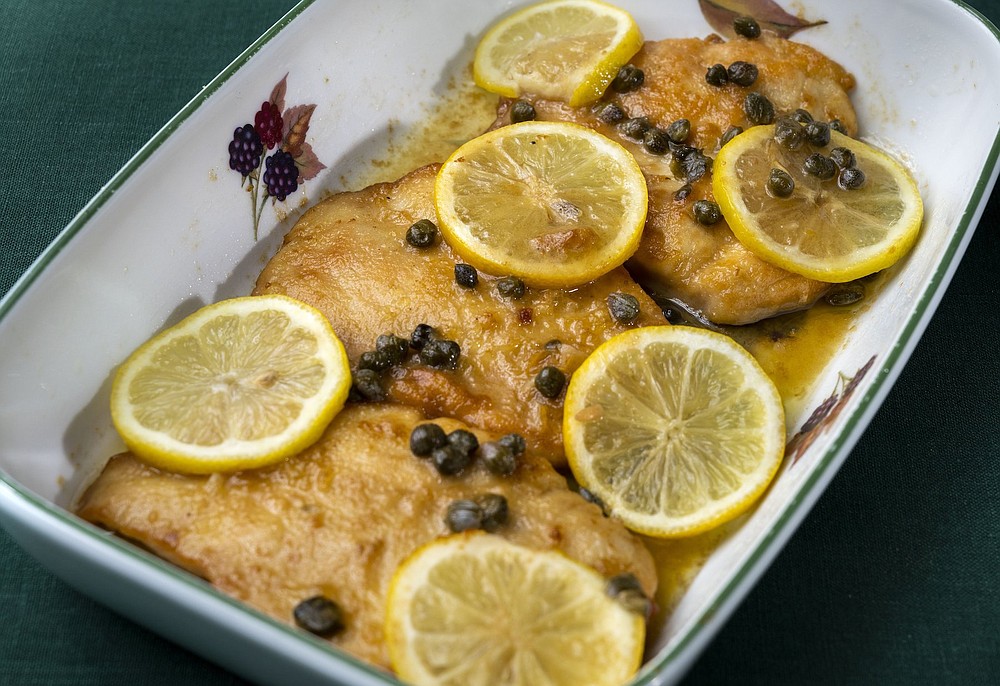 Slice chicken breasts in half crosswise into 4 cutlets and lightly pound each piece between sheets of plastic wrap until an even thickness (about ½-inch thick or less). Season lightly with salt. Place flour in a medium shallow bowl. Working one at a time, place cutlets in bowl and toss to coat in flour. Knock off excess flour and transfer to a plate.

Heat 2 tablespoons of the oil in a large skillet over medium-high. Working in batches if needed to avoid overcrowding the pan, cook cutlets, without moving them, until deeply browned underneath, about 2 minutes. Turn over and cook on the other side just until chicken is nearly cooked through, about 30 seconds. Transfer to a clean plate.

Add garlic and remaining 1 tablespoon oil to the skillet and cook, stirring often and reducing heat if needed to keep garlic from scorching, until golden brown, about 2 minutes. Add wine and capers and cook, swirling pan and scraping up any browned bits stuck to the bottom of skillet, until liquid is almost completely evaporated, about 3 minutes. Add ½ cup water, followed by the butter. Swirl pan vigorously while butter melts to help it form an emulsion with water, about 1 minute.

Return chicken to skillet and simmer until chicken is cooked through and sauce is thick enough to coat a spoon, about 2 minutes. Remove from heat and stir lemon juice into sauce; season with salt. Transfer chicken and sauce to a platter and top with parsley; serve with lemon wedges.

Put a large pot of salted water on high heat and bring to a boil.

When the pot of water starts to boil, add the pasta and cook according to package directions.

Meanwhile, cook the peppers mixture, stirring occasionally, until tender, about 10 minutes. Place the mixture in a blender or food processor and process to a puree. Return to the pan, stir in the cream, and season with plenty of salt and some pepper to taste. Keep warm.

When the pasta is done, drain and add to the sauce. Cook for 1 minute, stir in the marjoram, and serve.

Adapted from "The Silver Spoon" 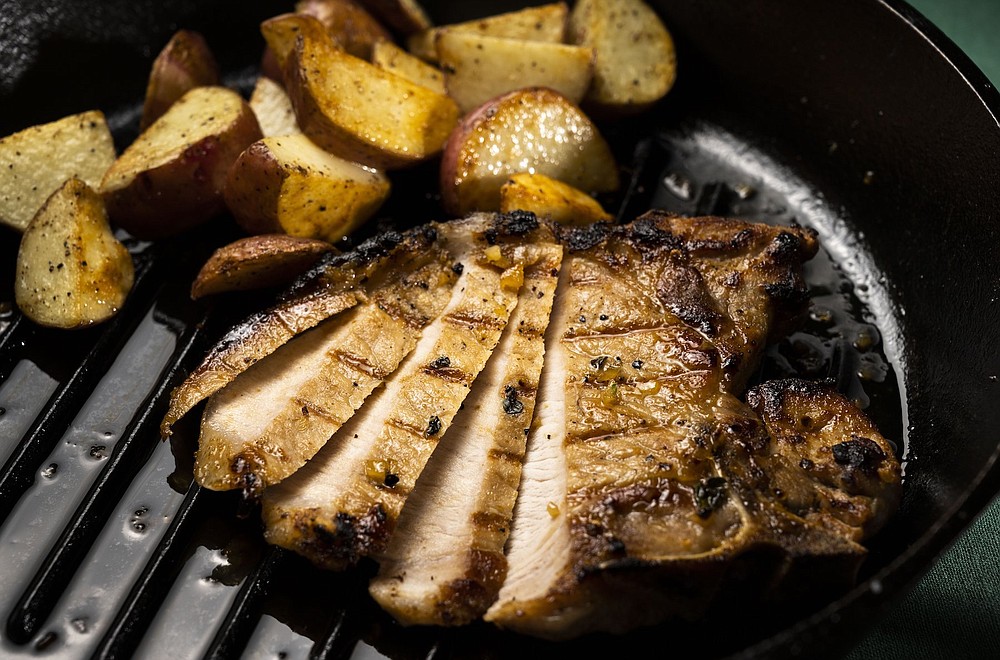 Heat oil in a pan or skillet over medium high heat until hot. Sear chops on both sides until golden and cooked through (about 4 to 5 minutes each side). Transfer to a plate; set aside.

Reduce heat to medium. Melt butter in the same pan, scraping up any browned bits from the bottom of the pan. Saute garlic until fragrant, about 30 seconds. Add the honey, ¼ cup water and the vinegar. Increase heat to medium-high and continue to cook until the sauce reduces down and thickens slightly, about 3 to 4 minutes, stirring occasionally.

Return pork to pan, baste generously with the sauce and broil or grill for 1 to 2 minutes, or until edges are slightly charred. 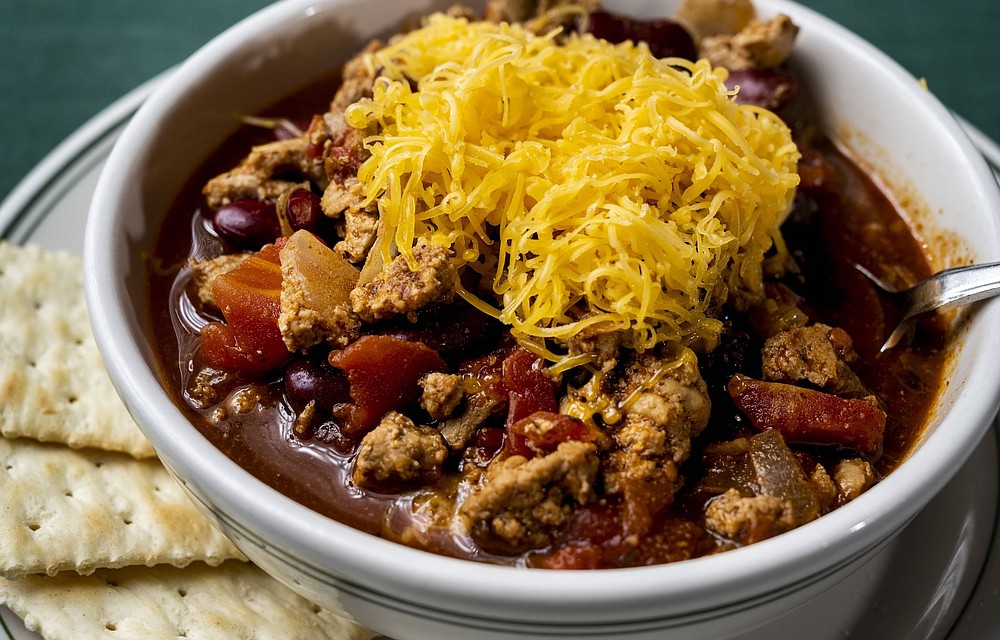 Place a large pot on medium-high heat. If using turkey, add the oil. Cook the turkey or beef, onion and garlic powder, stirring frequently, until the meat is cooked through. Drain the liquid, if any, and return the ingredients to the pot. Stir in the chile powder, smoked paprika, oregano, cumin, salt, tomatoes and beans and their liquids. Cook, stirring occasionally, until beans are tender, about 15 minutes.

Adapted from a recipe by General Mills