Offense comes through in Lions' 34-16 triumph 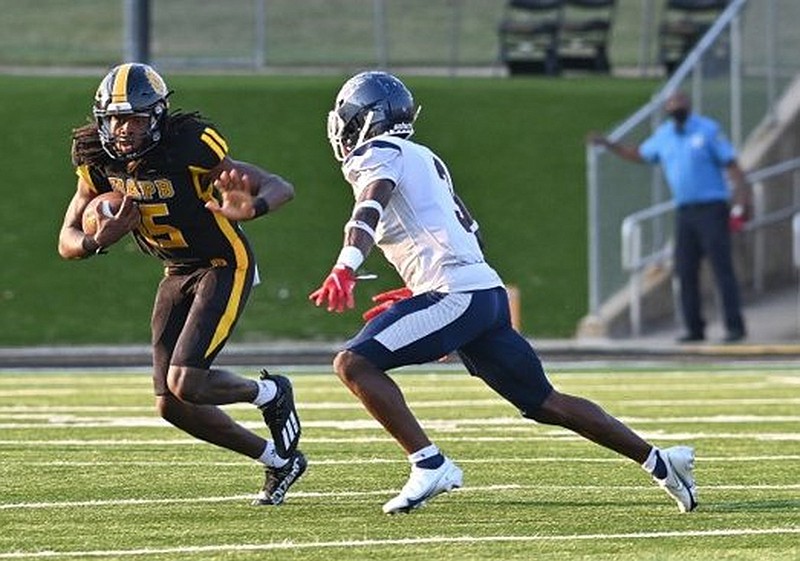 Among the 30 new faces on the University of Arkansas at Pine Bluff football team, by Coach Doc Gamble's count, offensive playmakers stepped up in Saturday's 34-16 win over Lane College.

Heralded receivers Tyrin Ralph and Josh Wilkes did not play Saturday, and neither did secondary standouts Jalon Thigpen or Solomon Brooks.

"They've got some soft tissue injuries, a tight hamstring and tweaked ankle," Gamble said during the first Southwestern Athletic Conference coaches' teleconference of the season. "If they needed to play, they could have. I left it up to them. They hadn't practiced in a week."

All four will have a little more rest time during UAPB's open week. The Golden Lions (1-0) will next face the University of Central Arkansas in Conway at 6 p.m. Sept. 18.

Gamble also got the production he was hoping for from a number of new running backs, including Britten (seven carries, 59 yards and a touchdown) and UCA transfer Kierre Crossley (11 carries, 54 yards and two touchdowns).

Gamble said it's been "a little trying" to get 30 new players acclimated into a program coming off a Western Division championship in the SWAC.

"It's my yelling and getting on them about every single detail," Gamble said. "When they think they're really playing, they're not going at the standard we set. And it's still some adjustments going on. I always tell them, follow the guys who've been here. We've got some good leadership going on."

UAPB led Lane 24-3 after a Zack Piwniczka field goal with 3:01 left before halftime, but the Dragons (0-1) scored two touchdowns in the final 77 seconds to pull within 24-16, leaving Gamble vexed.

"Our guys got comfortable too soon," he said. "[Lane] played really good defense, and we kept them around a little bit. That's the thing that bothered me; we don't want to keep anybody around, and we kept them around not a little bit, a whole lot. There's a certain way we've got to play. We've got to execute at a high level in all phases of the game."

On Saturday UCA had a 7-6 lead on Arkansas State University at halftime, before a quarterback change helped spur the Red Wolves to a 40-21 victory. The Bears' defense allowed 511 total yards, but receivers Lujuan Winningham, Tyler Hudson and Chris Richmond combined for 381 all-purpose yards and accounted for all three Bears touchdowns.

"They're very good," Gamble said of the Bears. "They've got a talented quarterback (Breylin Smith), who's a tremendous arm talent. They have talented wide receivers who can go play anywhere. They're very good on defense and in special teams. They'll hit you. It's a big-time game, and it'll be a big-time deal. That'll be their first home game, so it'll be a good one."

UCA visits Missouri State University in Springfield for a 7 p.m. kickoff this Saturday.

Alabama A&M University Coach Connell Maynor made a pitch for UAPB and Jackson State University to be ranked in the STATS Perform FCS Top 25 poll.

UAPB debuted in the poll at No. 24 on April 19, almost two weeks before its SWAC title game loss to Maynor's Bulldogs, but did not get a vote in this week's rankings.

UCA slid five spots down to No. 19 following the loss to Arkansas State.

The Golden Lions moved up to No. 2 in both BOXTOROW's HBCU Championship Subdivision Coaches and Media polls.

UAPB was previously ranked fifth in the coaches' poll and fourth in the media poll, which includes historically Black college teams across all divisions.

BOXTOROW is an acronym for the national radio show "From the Press Box to Press Row."

George won the 1995 Heisman Trophy as a running back for Ohio State University and rushed for 10,441 yards in a nine-year career with the Tennessee Titans (1996-2003) and Dallas Cowboys (2004). Both he and Sanders worked the sidelines on Sunday: Sanders' Tigers beat Florida A&M 7-6 in Miami Gardens, Fla., and Tennessee State lost 16-10 to Grambling State in Canton, Ohio, in George's coaching debut.

Said Sanders of George's team: "They're going to take on his personality. He was tough, he was fast, he was big and he was strong."

Former UAPB quarterback Shannon Patrick completed 15 of 22 passes for 215 yards and two touchdowns with an interception for Bethune-Cookman University in a 38-28 loss to the University of Texas at El Paso. Patrick, a redshirt senior from West Palm Beach, Fla., transferred from UAPB following the 2019 season.

CORRECTION: UCA leads the all-time series with UAPB 10-2. A previous version of this story indicated the incorrect amount of victories for UCA.