Rucker a receiving fixture for Wolves 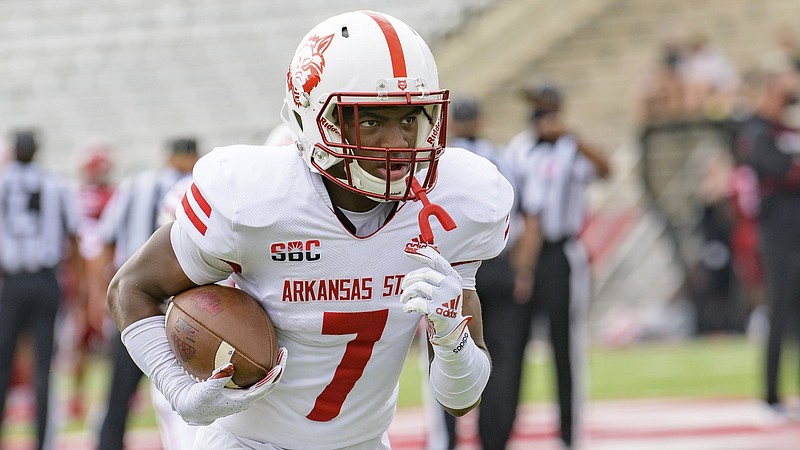 JONESBORO -- Corey Rucker acknowledged last week that he had jitters entering Arkansas State University's season opener. The sophomore was making just his second career start and is part of a group that understands the task it shares in replacing Jonathan Adams.

You wouldn't have known the butterflies existed by the time Rucker hauled in his third touchdown pass of the night, blowing past a pair of University of Central Arkansas defensive backs before high-stepping up the ramp in the corner of Centennial Bank Stadium.

While Coach Butch Jones has not named a starting quarterback for ASU's Saturday showdown with Memphis, it could be Layne Hatcher partly because of his connection with Rucker.

"As much as Layne and I have worked together in the offseason, he trusts me," Rucker said Tuesday during the Red Wolves' weekly media availability. "[Layne] knows we've got a lot of rhythm and timing, and he knows that if he throws me the ball, I can catch it."

Rucker, who was named Sun Belt Conference offensive player of the week Monday, now has eight career touchdown receptions -- the last six of which have come from Hatcher during ASU's two most recent games.

His presence alone has changed the way opponents handle the Red Wolves' offense. According to Jones, UCA altered its coverage in the second half of Saturday's contest, often bracketing the slot receiver. Typically, that was Rucker -- according to Pro Football Focus, 48 of the Bentonia, Miss., native's 59 snaps came from the slot against the Bears.

As Jones describes it, this is just "the infant stages" of Rucker's career.

"He was results-oriented, and when you become result-oriented, all that does is build anxiety amongst everything that you do," Jones said. "You're not going to get 10 catches and 100 yards on your first catch. You're going to have to run the right route, catch the ball and then it builds upon each other.

"[But] the one thing with Corey is you know what you're getting every day. He's very, very consistent in his approach."

At times a year ago, it felt like Adams and Co. rather than a group of wide receivers. ASU's leading pass-catcher had more than a quarter of the team's receptions and receiving yards as well as 12 of its 39 receiving touchdowns.

Even if Rucker winds up leading this group of Red Wolves, he won't be under the same pressure to do it alone.

Te'Vailance Hunt, who pulled in a late touchdown against UCA, was graded by PFF as the nation's 81st-best wideout in Week 1 -- ahead of Rucker at No. 88. Jeff Foreman wasn't far behind at No. 140.

With three targets essentially among the top 30% in the country, even on a week when ASU's offense scuffled for 30-plus minutes, there are signs of a potent passing game regardless of who's under center -- Hatcher of James Blackman, last Saturday's starter.

"It doesn't matter who's throwing it -- you could put an eighth-grader back there and let them throw the ball," Rucker said. "My job is to catch the ball, so no matter who's at quarterback, I can't let that affect anything else."