20 years after 9/11, some Arkansas Muslims still emerging from shadows of hate 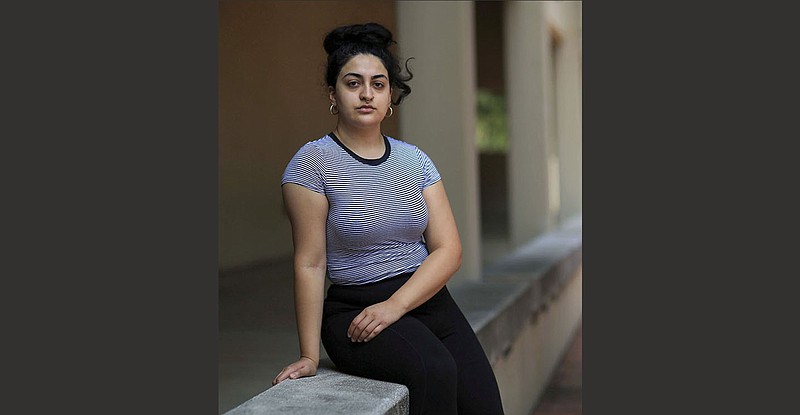 “I remember immediately having to justify who I was and where I came from,” Arsala Khan, a doctoral candidate in criminal justice at the University of Arkansas at Little Rock, said of the 2001 terrorist attacks that happened shortly after her family moved from Pakistan to Arkadelphia when she was 13. (Arkansas Democrat-Gazette/Staton Breidenthal)

It was several hours after two commercial airplanes slammed into the twin towers of the World Trade Center in New York City during fifth-period science class when Arsala Khan first noticed that something had changed.

Born in Pakistan, Khan, with her wavy black hair and olive-toned skin, already was an outsider in Arkadelphia, a rural town that is predominantly made up of Blacks and of whites. She, her parents and two sisters moved to Arkadelphia in August 2001.

As news emerged that the terrorist attacks on the World Trade Center and the Pentagon on Sept. 11, 2001, were orchestrated by an organization of Muslim extremists, Khan suddenly changed from outsider to enemy. As a Muslim, students seemingly turned on her, glaring, making rude comments, asking insensitive questions about Islam.

"It's been such an uphill battle."

As the 20th anniversary of the 9/11 terrorist attacks approaches, there are some Americans and immigrants to the U.S. who experienced a collective trauma that is often overlooked and that many say still lurks in the shadows today.

Those who experienced that trauma are followers of the Muslim faith, who, within hours of the attacks on the World Trade Center and the Pentagon, feared for their safety and even their lives, as Islamophobia gripped America powerfully for the first time in history.

It rapidly emerged after reports that the extremist group al-Qaida claimed responsibility for the terrorist attacks, stoking fanatical patriotism and the dark side of that: Xenophobia.

In Arkansas and across the country, followers of Islam and the mosques where they worshipped became targets of overt discrimination, even hate crimes. Members of Muslim communities in Arkansas say women who wore traditional Muslim clothing, such as a hijab, became afraid to go outside.

Some, like Rizwan Khan, also from Pakistan, (no relation to Arsala Khan), say they lost friends.

"I had friends who worked with me, and we used to go and hang out and have lunch at each other's houses pretty much every day," said Rizwan Khan, who lives in Rogers. "All of a sudden, they just stopped talking to me."

In nearby Bentonville, where Rizwan Khan still works, he said some of his friends, also followers of Islam, were stopped at a traffic signal not long after the attacks when a car window rolled down, its occupants shouting, "'Go home, you terrorists!'" the 50-year-old said.

Still, when Rizwan Khan makes trips back home to Pakistan or to other countries in that region, he faces extra security screenings at airports when reentering the U.S.

He said he not only felt afraid but also sad that the U.S., known to be a "melting pot" of immigrants, suddenly "does not accept you there."

"We became one of those who is not looked after," Rizwan Khan said. "It made all of us think, 'Where will we be in a couple of years from now?'"

Almost 20 years later, members of Muslim communities in Arkansas who spoke to the Arkansas Democrat Gazette about their experiences after the 9/11 attacks still make a point to explain that Islam is a religion of peace, a religion that does not condone violence or murder, certainly does not condone what happened in September 2001.

One community member noted that local officials, like judges and a mayor, are aware of what a mosque in Northwest Arkansas is doing, as if suspicion still remains that the religious centers are somehow harboring extremism.

Tusty ten Bensel, director of the University of Arkansas at Little Rock's School of Criminal Justice and Criminology, who received a grant from the National Science Foundation to study hate crimes against Muslims in Arkansas, said the defense mechanism of Islam is likely now deeply embedded within the community after years of proactively trying to stave off the stereotype of Muslims being terrorists.

"There are lasting mental impacts, emotional health impacts," said Bensel, an immigrant from Bangladesh who also practices Islam and was in Arkansas when 9/11 occurred. "Think about living in fear all of the time, going outside and you never know when you are going to be harassed."

"That takes a toll," she said. "That makes you feel like you are less involved and kind of withdrawn from the rest of the community. You can imagine how that feels."

Bensel said that through her research as well as her personal experience as a member of the Muslim community in Little Rock, she is aware of women who prefer to wear traditional Muslim dress in public who are still afraid to venture out much alone.

"Even now, those who wear the traditional Muslim outfits and coverings often feel like they are looked down upon or harassed," Bensel said.

She said mosques in Little Rock still have security cameras and sometimes even security guards, particularly during holidays when more people attend.

"We need to have a security guard when we go practice our faith," Bensel said.

In the fall of 2016, vandals spray painted a mosque in Fort Smith with anti-Islamic and other vulgar messaging. Before that, just across the border in Joplin, Mo., a mosque was burned to the ground in August 2012.

The researcher also said that many of the people she is interviewing for her study who have experienced some type of discrimination or fear of discrimination trace the emergence of that fear to Sept. 11, 2001.

"In the preliminary interviews we have done, 9/11 comes up a lot," she said. "Participants [in the study], so far, have been saying that is when the climate changed, and they became more fearful."

Nearly half of respondents in a 2017 Pew Research Center survey of U.S. Muslims said they experienced at least one instance of religious discrimination within the year before. Yet 49% said someone expressed support for them because of their religion during the same time period.

Some do say that in the aftermath of 9/11, there was a surprising outpouring of support from different faiths, from people in the community, strangers calling to check to see if Muslims living in Little Rock needed help.

Dr. Mohammed Moursi, a vascular surgeon at the University of Arkansas for Medical Sciences who is from Egypt, said after the attacks he was invited to numerous churches and community organizations to speak about his Muslim faith. UAMS also asked him to speak on behalf of the Muslim community at an event after the attacks.

"I did have concerns [after the attacks]," said Moursi, who moved to Little Rock in 1995. "I felt grief for the Muslim community at-large, that we would be grouped into these extremists who were clearly outside the fold of the religion."

"I was devastated that these people were acting this way in the name of my religion," he said.

He said every day people from Little Rock and across Arkansas would call the mosque he attends "to make sure we were OK."

"Everyone was reaching out, wanting to have knowledge, wanting to know if they could help, checking on us," Moursi said. "That made me feel part of a family or a community, and that was rewarding."

One overriding theme among members of the Muslim community in Arkansas who experienced 9/11 and its aftermath is ongoing community involvement and the desire to continue to push for acceptance of their faith in the state.

For Arsala Khan, a doctoral candidate in criminal justice at UALR, the attacks were a seminal moment, defining a trajectory in her life in which she hopes to help those who are subjugated to discrimination of many types.

"I was completely transformed into a radical, but I am a radical who is absolutely, staunchly nonviolent," she said. "I am a radical of love. That is the greatest, strongest force. It moves generations."

"People think hate is as strong," Arsala Khan said. "But hate will eventually run out."

Editor’s Note: This is the fifth in a series of articles looking back at the Sept. 11, 2001, terrorist attacks and Arkansans whose lives were changed.

Print Headline: 20 years after 9/11, some Arkansas Muslims still emerging from shadows of hate