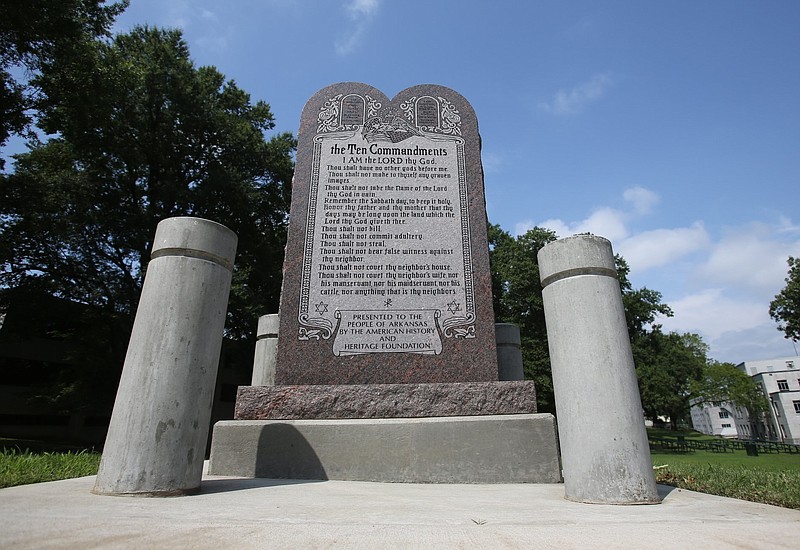 A nonprofit 501(c)(3) organization led by Sen. Jason Rapert, R-Conway, that solicited donations to construct a monument to the Ten Commandments on the grounds of the state Capitol agreed Wednesday to provide plaintiffs in two federal lawsuits objecting to the monument a list -- with some exceptions -- of contributors to that effort.

Two groups filed separate lawsuits, since merged, in 2018 to challenge the constitutionality of the monument's placement on the Capitol lawn. They allege that the monument violates the establishment clause of the First Amendment, constituting an illegal government endorsement of religion.

The two groups of plaintiffs are members of a walking and cycling club who are supported by the American Civil Liberties Union of Arkansas, and people representing a variety of religious viewpoints, led by the Arkansas Society of Freethinkers. Both want the monument removed.

An intervening group called the Satanic Temple, which describes its mission as "encouraging benevolence and empathy among all people," also contends that the monument represents an illegal government endorsement of religion. However, it seeks either removal or the placement of a second monument -- an 8 ½-foot-tall bronze statue of Baphomet, a deity that is part man, part goat -- on the grounds as well.

Travis Story, an attorney for the American History and Heritage Foundation, had objected to both the disclosure of the donor list and a subpoena for the organization's treasurer, Roger Quattlebaum, to testify at the hearing Wednesday in federal court in Little Rock.

In a motion filed the previous day, Story argued that Quattlebaum had been subpoenaed in his individual capacity to testify to matters regarding the American History and Heritage Foundation by the plaintiffs seeking information that should come from the foundation itself.

Gerry Shulze, an attorney for the plaintiffs, said the foundation had asserted that a list of donors was privileged information, which he disputed.

"The so-called privileged list is just a lot of anonymous donors," he said. "We don't have any other documents listed."

"We haven't been subpoenaed for that," Story said.

Schulze insisted that Rapert had been subpoenaed for the information.

"There is a bulk of discovery that hasn't been answered by Mr. Rapert," Baker said, angrily. "I'm inclined to put Mr. Rapert on the stand to let Mr. Schulze ask his questions."

Finally, clearly irritated with the legal maneuverings, Baker ordered the attorneys to come up with a solution among themselves, and recessed the hearing for 15 minutes for them to do so.

The main issue Wednesday was a list of 810 people and organizations that contributed to the construction of the statue through a GoFundMe campaign, of which 175 donors chose to be anonymous. Following Baker's order, attorneys for both sides reached a compromise whereby the American History and Heritage Foundation would identify the 175 anonymous donors as either churches or as individuals, without disclosing any identification beyond that.

"Obviously," Schulze said, when court resumed, "I would need to see the documents but I believe it does resolve the need for the show-cause hearing."

Baker placed a 10-day deadline for the documents to be turned over and said she would set a status hearing in the matter sometime in the next 30 to 45 days, but urged both sides to be patient.

"Covid has set everything back," Baker said. "We've had four or five jury trials since reopening and we have more this month."

A Ten Commandments monument was first installed on the Capitol grounds on June 27, 2017, but was rammed by a vehicle overnight and shattered into pieces. A replacement monument, this time surrounded by 3-foot-tall concrete posts, was installed April 26, 2018 in the same spot.

After the hearing, Rapert declared victory for the American History and Heritage Foundation and led an impromptu prayer meeting with about a dozen supporters outside the courtroom.

Information for this news article was contributed by Linda Satter for the Arkansas Democrat-Gazette.

CORRECTION: Attorneys in a pair of federal lawsuits over the Ten Commandments monument on the state Capitol grounds reached a compromise in federal court Wednesday to disclose only if anonymous donors to the monument building fund are churches or individuals. An earlier version of this story mischaracterized the compromise.