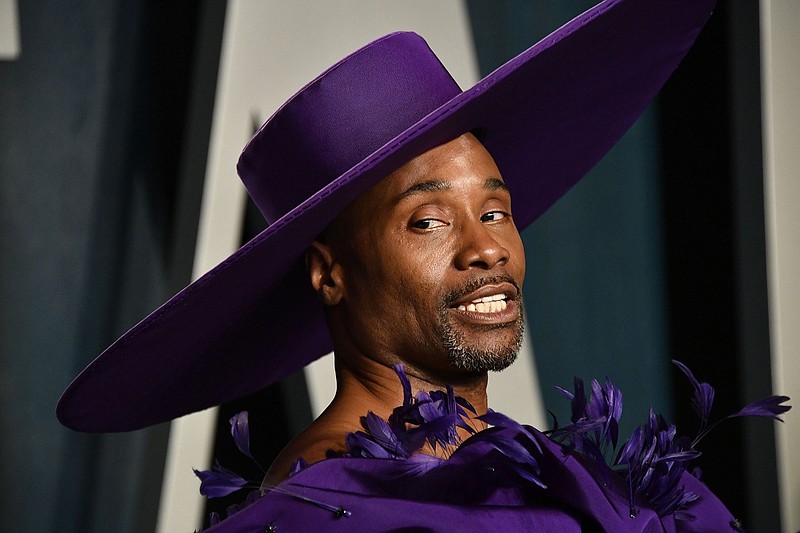 Billy Porter plays a gender-fluid Fairy Godmother in “Cinderella,” starring Camila Cabello. Also out now is Porter’s “What If?” a coming-of-age high school dramedy that will serve as his directorial debut. (Frazer Harrison/Getty Images/TNS)

PITTSBURGH — Magic has been a driving force of Billy Porter's most recent work.

The Pittsburgh native dabbled in some literal magic as a genderless fairy godparent dubbed the Fab G in "Cinderella," which began airing Friday via Amazon Prime Video. Not only did he get to transform Camila Cabello's Cinderella into her ideal version of herself, but he also got to break down barriers of gender norms in the process.

"I'm excited to portray magic as having no gender," Porter said. "It's time to have different conversations. This interpretation of 'Cinderella' sort of turns all of the traditional and problematic tropes on their ear. It explodes these traditions into the stratosphere and creates a whole new language.

"The Fab G is a part of that interpretation. Art imitates life, life imitates art, and I am in the position and have the platform to show up in this role and hopefully move the conversation that exists surrounding it forward."

His other recent endeavor that inspired Billy to invoke the "M" word was "What If?" the coming-of-age high school dramedy that will serve as his directorial debut. He had been in Pittsburgh since July filming it before wrapping production.

"It was magical," he said of the experience. "It's my first feature film. To be able to come home and shoot and be embraced by the community and local crew is exceptional and so loving. We had such a great time. It's a love letter to Pittsburgh, and I'm so excited to be in the position to be able to do that. Hopefully this is just the start of much, much more."

Porter said he was "surrounded by love" on the Pittsburgh set of "What If?" in the form of local folks he had worked with before who he brought in because he trusted them to help make his directorial dreams come true. That included "Hamilton" star and fellow Carnegie Mellon alumnus Renee Elise Goldsberry, who Porter called to be in "What If?" because "I had to have my sister there."

He mentioned that the shoot went two days over for a variety of reasons, not the least of which was some less-than-desirable Pittsburgh weather that prevented him from getting the shots he needed of various outdoor Pittsburgh staples like Point State Park, the Mount Washington overlook, and the outside of Phipps Conservatory and Botanical Gardens.

"It rained for nine weeks straight," he said. "We had to reschedule all our outside money shots for the Pittsburgh love letter."

Now that he's done filming "What If?," Porter can focus on his many other projects, which includes promoting "Cinderella." That movie was supposed to be released February in theaters, but the covid-19 pandemic delayed it and eventually forced Sony into putting it out directly on a streaming service.

At this point, Porter is just happy that "Cinderella" is finally coming out and hopes it can serve as an "injection of joy" in dark times. That's the energy he tried to bring to a viral marketing stunt that saw him and co-stars Cabello, Idina Menzel and James Corden (decked out in a mouse costume that fits with his "Cinderella" character) stopping Los Angeles traffic to perform a rendition of Jennifer Lopez's "Let's Get Loud."

"It's all joy," said Billy of the flash mob that received some light internet mockery last weekend. "To show up and be able to promote something that is getting so much goodwill, that's what we all dream of. It's amazing."

Writer-director Kay Cannon wrote the Fab G with Porter in mind, he said. Cannon and her collaborators were "pulling from my energy I have in my everyday life" for the character, which if you know anything about Porter definitely comes across on screen.

Based on the way he responded to being asked if he wished he was in more of the film than just a few voice-overs and one extended musical number, he has clearly heard that question before.

"The fairy godmother is always in one scene," he said. "I don't know what y'all are talking about! She gives [Cinderella] the dress, some encouragement and that's it. That's the gig, y'all! Leave you wanting more."

It's quite a memorable scene, though, as Porter is decked out in a lavish outfit created by costume designer Ellen Mirojnick that accents the "fashion as activism" vibe Porter has often employed throughout his career, in this case helping to facilitate "the masculinity conversation" he'd like the Fab G to inspire. Those physical decisions went as far as Porter opting to keep his goatee and deciding to cut a hair piece that he believed "pushed it too far into the feminism side."

Then there's the song itself that he gets to sing: "Shining Star" by Earth, Wind & Fire. In the original script he read, Fab G's song was "Sweet Dreams (Are Made of This)" by Eurythmics.

"OK, I see what y'all want me to do," he said upon realizing his song had changed. "Y'all have laid the groundwork for me to come in and slay. ... 'Sweet Dreams' is a different kind of slayage from 'Shining Star.' They made the decision, I just showed up and fulfilled the assignment."

Porter has been slaying quite a few assignments lately, from "Cinderella" and "What If?" to his forthcoming book "Unprotected: A Memoir," out Oct. 19, which he says "will be very useful to many, I hope." He was recently tapped to direct his next feature film, the gay teen comedy "To Be Real," for Amazon Studios.

How does he find time for all these creative pursuits?