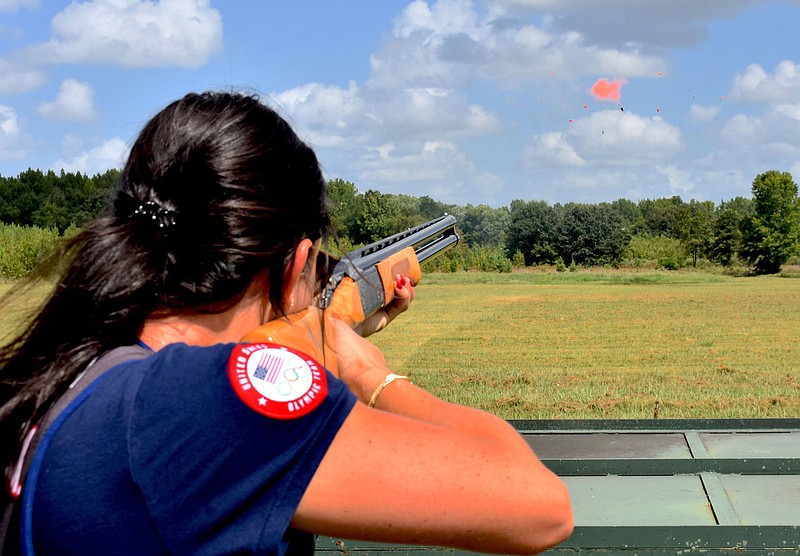 Kayle Browning shows the target-breaking form that enabled her to win a silver medal in women’s trap at the Tokyo Olympics. (Arkansas Democrat-Gazette/Bryan Hendricks)

On Aug. 28, before going to the Arkansas Youth Shooting Sports Complex at Jacksonville, I asked my teenage daughters if they wanted to meet an Olympic medalist.

"What event?" they asked.

"Uh, I'm good," they both said, declining the invitation.

Kayle Browning of Wooster, who won the silver medal in women's trap at the Tokyo Olympics, acknowledged that the sport indeed suffers from a lack of appreciation among spectators, but they are highly respected by other Olympians.

"We don't necessarily get as much media coverage as the other events, but I don't think it's the Games' fault," Browning said. "At the Games, we get treated 100% like every other athlete there."

All Olympians have specialized gear, but no other Olympic athlete competes using a $17,000 shotgun. Browning uses a Krieghoff K-80, a highly refined version of the old Remington Model 32. Krieghoff custom built the gun for her when she was 14 years old. She has fired tens of thousands of rounds through it without a malfunction, she said.

"I would say it's obviously an exceptionally well-built gun," Browning said. "In my opinion, it's second to none. They hardly ever break. I've never had a spring malfunction or any other malfunction. Besides their quality, the customer service is awesome. They go above and beyond anything I can ever imagine."

Browning takes her gun all over the world. Obviously it is not a carry-on item, so she is separated from it for long hours aloft, and through multiple connections at scores of airports. When necessary, Krieghoff gets involved to make sure Browning's gun reaches its destination.

"One time I was coming home from the World Cup, and the gun got stuck in Germany," Browning said. "Krieghoff is a German-based company. I called the head guy there and said, 'Oh, my gosh, my gun is stuck in Germany. I don't speak German, they don't speak English, can you help?' They found my gun, talked to the airport and got it shipped back home for me."

Other places are a little sketchier.

"Oh yeah, especially some of these countries that we travel to, you're just praying," Browning said. "You put the bag tag on it. You're taking pictures of the number and watching it, like, did it get loaded on the plane? You watch it everywhere it goes."

With that amount of risk and for what it means to her career, Browning surely has the Krieghoff well-insured.

"I keep that private. No comment," Browning said, laughing.

Browning transports the Krieghoff in a Pelican Storm case. It is made of very thick plastic and contains a lot of foam padding. Surprisingly, Browning locks it with light duty locks.

"I get made fun of, but my locks aren't too heavy duty," Browning said. "I started off with some real heavy duty locks, but they always got cut. TSA cut them. I was like, 'OK, I'll just carry extra insurance.' "

Clay target shooters obsess over chokes. Browning uses an improved modified tube in her bottom barrel for the first shot, and a full tube in the top barrel for the second shot. Browning said she waits until everything is still on the line before calling for her target.

"Naturally, my eyes want to go to the fastest thing," Browning said. "So, we're sitting here talking and a bird flies by, your eyes immediately want to go to that. It's just natural. When I shoot trap, I try to have everything still so when I call 'Pull,' and the target's the first thing they see move, I can get my eyes there a lot quicker."

Browning said she keeps her eyes glued to the zone above the trap bunker, but that she has a complex system to coordinate her eyes to lock onto a target. She said the first shot occurs when the target is 30-35 yards out, and the second shot is about 45 yards out.

Clay target shooters are also obsessive about their ammo. Browning uses Federal Gold Medal ammo packed with 24 grams of No. 71/2 lead. That equals about .85 ounce.

"Federal is my sponsor, and that's what everybody has to shoot," Browning said. "The load can't be any more than 24 grams. They're consistent, very consistent. We went through an extensive trial and error with these shells. They were made specifically for Team USA, and we went through about six months of patterning where we told them what we liked, including push and recoil and all that fun stuff. They pattern the best I've seen in international trap."

Like all target shooters, Browning has periodic cold spells hitting targets at certain angles. It changes all the time.

"That's something that's learned in practice and training, but I do not recommend changing your foot position from station to station," Browning said. "The reason being in international trap, the line is straight. In American trap, the line is kind of curved. In American trap, you can kind of adjust to keep the angle right, but in international trap, it's all parallel to the bunker, so you keep your feet in the same position where you started."

Browning is also an avid wingshooter. For upland hunting she uses a Krieghoff K-20, a smaller framed, sub-gauge version of the K-80. For ducks she uses a Beretta A400 12-gauge. She often shoots doves while sitting. It demonstrates that trap is one of the few Olympic sports that has a practical, real-world application. 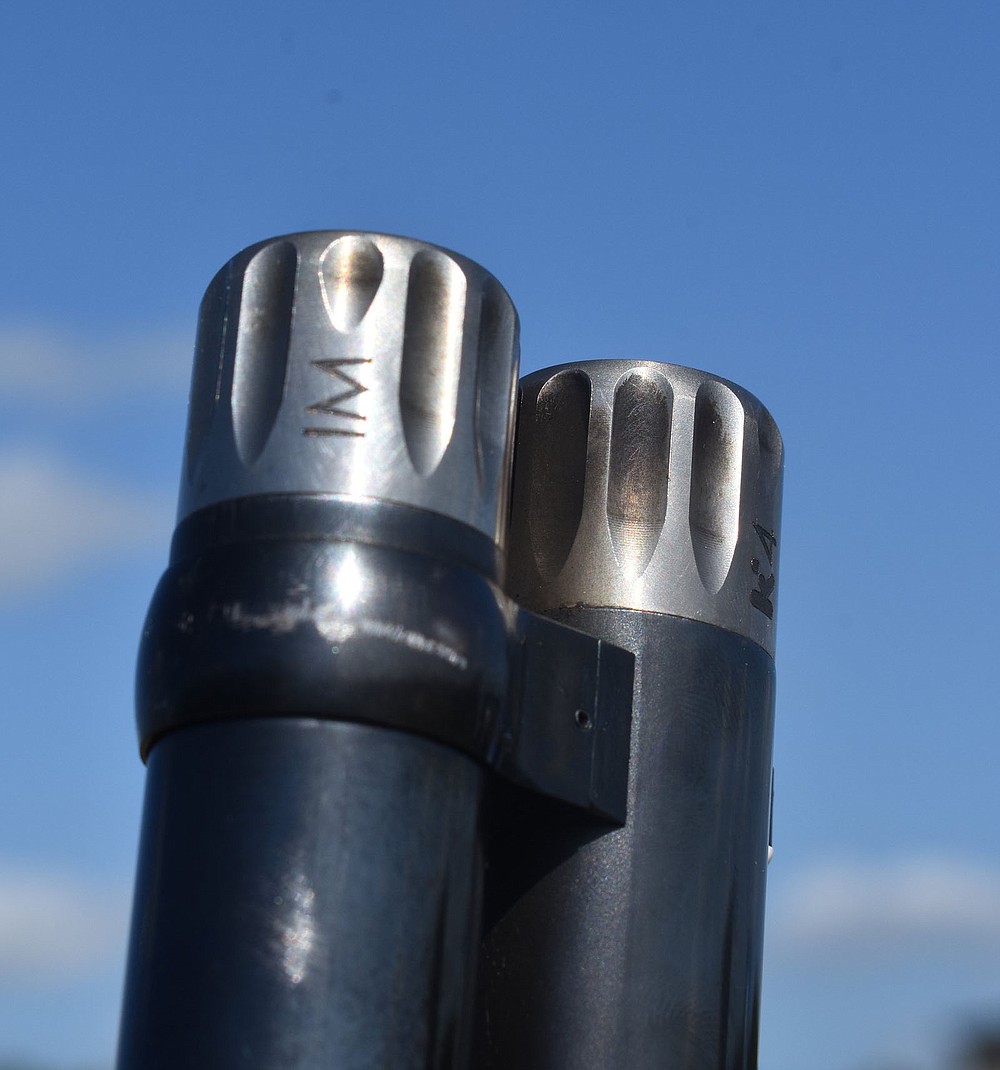 In competition, Kayle Browning uses an Improved Modified choke tube in her lower barrel for first shots and a full tube in the top barrel for second shots. (Arkansas Democrat-Gazette/Bryan Hendricks) 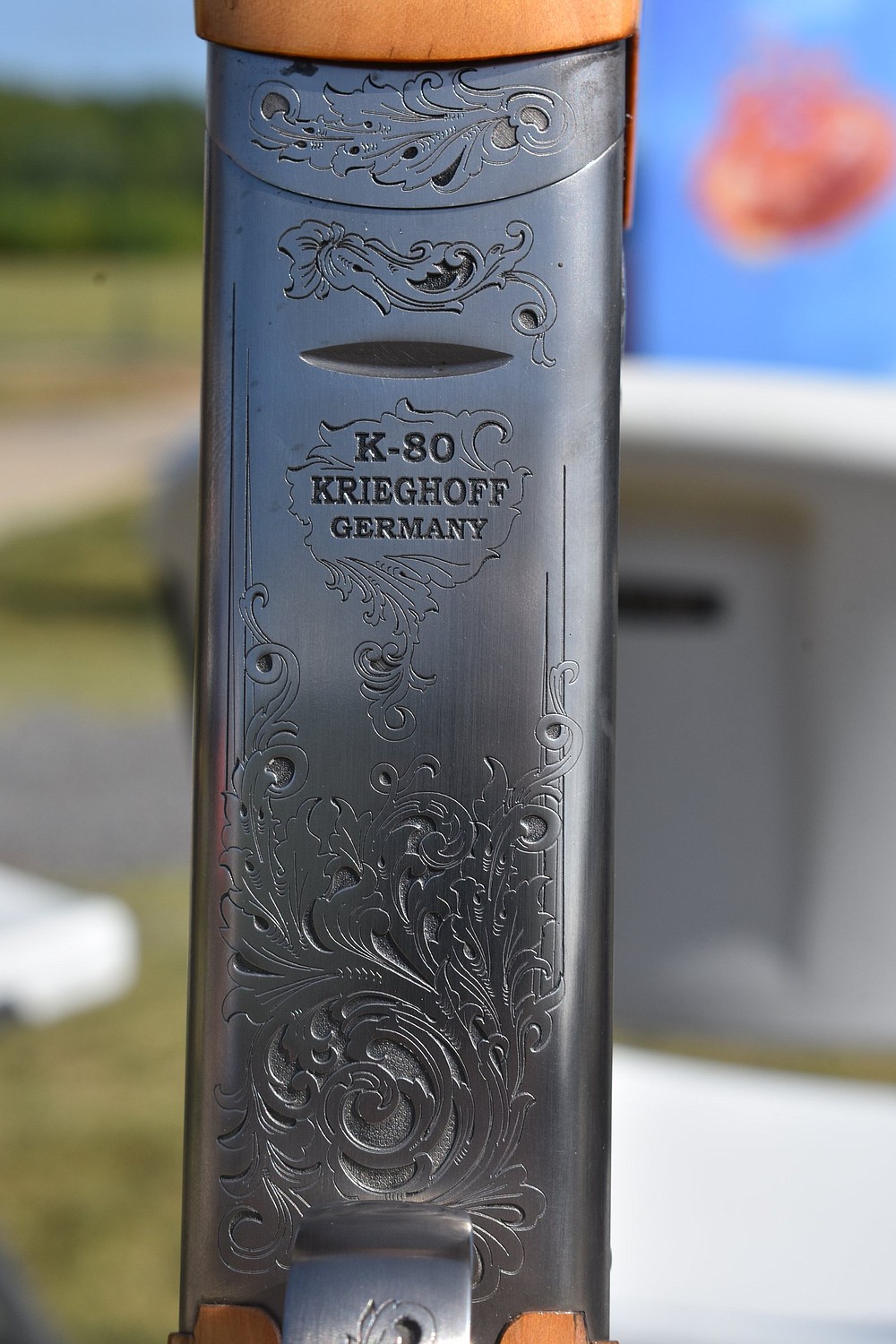 Kayle Browning has been using the same custom-made Krieghoff K-80 over/under in competition since she was 14 years old. (Arkansas Democrat-Gazette/Bryan Hendricks)

Print Headline: Caught in a trap