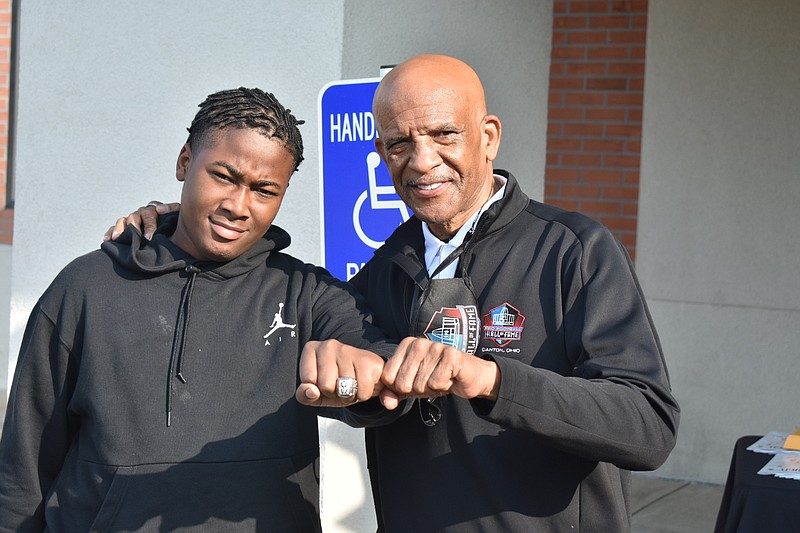 Drew Pearson pulled up to the Watson Chapel Health Complex in a black vehicle and, less than 30 minutes later, the University of Arkansas at Pine Bluff spirit squads cheered for the Pro Football Hall of Famer.

"D-R-E-W! Welcome to Arkansas!" they yelled, in the same cadence of their traditional "U-A-P-B! Gooolden Lions!" cheer.

Decked in mostly black with a Hall of Fame-emblazoned jacket and face mask, the 70-year-old former Dallas Cowboys wide receiver had touched down, so to speak, in Pine Bluff for a free vaccination drive and to encourage locals to take their shot against covid-19. Jefferson Regional Medical Center, which operates the health complex on Dusty Lake Drive, teamed with Ambetter from Arkansas Health and Wellness to bring Pearson to the Natural State, one day before his Cowboys open the NFL season against the world champion Tampa Bay Buccaneers.

Pearson said the Pro Football Hall of Fame sent him across the Southwest, including stops in Albuquerque, N.M., and Austin and San Antonio, Texas, to tout vaccinations.

"The Pro Football Hall of Fame is 100% behind vaccinations, and especially within their group of NFL players, we're promoting that within," Pearson said. "Some players aren't taking the shot, and they're putting their team at risk and all that kind of stuff. But we all know the way to deal with this covid-19 is to get vaccinated. That's our only alternative right now, especially with this delta variant coming and being part of this whole process."

Pearson was inducted in the hall last month, ending a 38-year wait for a wide receiver who retired as Dallas' all-time leader in receptions (489) and receiving yards (7,822) after the 1983 season, his 11th in the NFL. Perhaps the game he's most remembered for is a 1975 divisional playoff against the Minnesota Vikings where he hauled in a 50-yard touchdown pass from Roger Staubach in the final seconds, a play that gave rise to the term "Hail Mary," according to his hall bio. Dallas advanced to Super Bowl 10 that season.

"Once the final word came down, I was so excited -- I almost had a heart attack when I heard it -- I wasn't expecting to hear it at that time," Pearson said, alluding to a sharply contrasting image of his disappointment over being passed over in January 2020.

His absence in the hall until this summer was an annual controversy in the pro football world, as he would become the last of the 22 offensive and defensive members of the 1970s All-Decade first team to be inducted in the hall. (Only one of three first-team special teamers, punter Ray Guy, is a Hall of Famer.)

"I only had to get the word eight months later that I would be in," he said. "God is good, and I just had to be patient through the whole process. That's what I was. When the word came -- it could have been 38 years earlier or 38 years later -- the words still sound the same and have the same effect when they said, 'You're a member of the Pro Football Hall of Fame.'"

Pearson said no doubt entered his mind that he needed to be vaccinated so he could be healthy enough to take part in the induction festivities in Canton, Ohio.

"It should give you a [sense of] confidence," Pearson said of the shot. "Any other sickness or disease when health is involved, we do everything we can to combat that."

Kalye Gibson, a freshman at Pine Bluff High School, had arrived at the health complex for an appointment when Pearson greeted him. Gibson said he had never heard of Pearson, but he tried on Pearson's championship ring from Super Bowl 12 in the 1977 season.

Gibson's mother, Whitney Nelson, had never heard of Pearson, either, but she was told a football player would be in town when confirming her son's appointment.

"He had a 1 o'clock appointment, but they just wanted me to bring him earlier," Nelson said.

"We've got a great team here at HealthWorks," Austin said. "We've got heroes [nurse] Erin Bolton, who's been in the fight since the infancy of the pandemic," Austin said. "She's been great not only for our organization in protecting our staff and our employees, but she's been on the front lines in administering vaccinations herself and coordinating clinics like these to encourage people to come out and get vaccinated."

Hospital spokesperson Wendy Talbot said vaccinations at the hospital have slowed down in the past two weeks, but hospital officials had seen "strong" numbers when the delta variant first turned up.

"We're hoping things like this can really help to get the vaccines out," Talbot said. "Until we get more people vaccinated, covid's here." 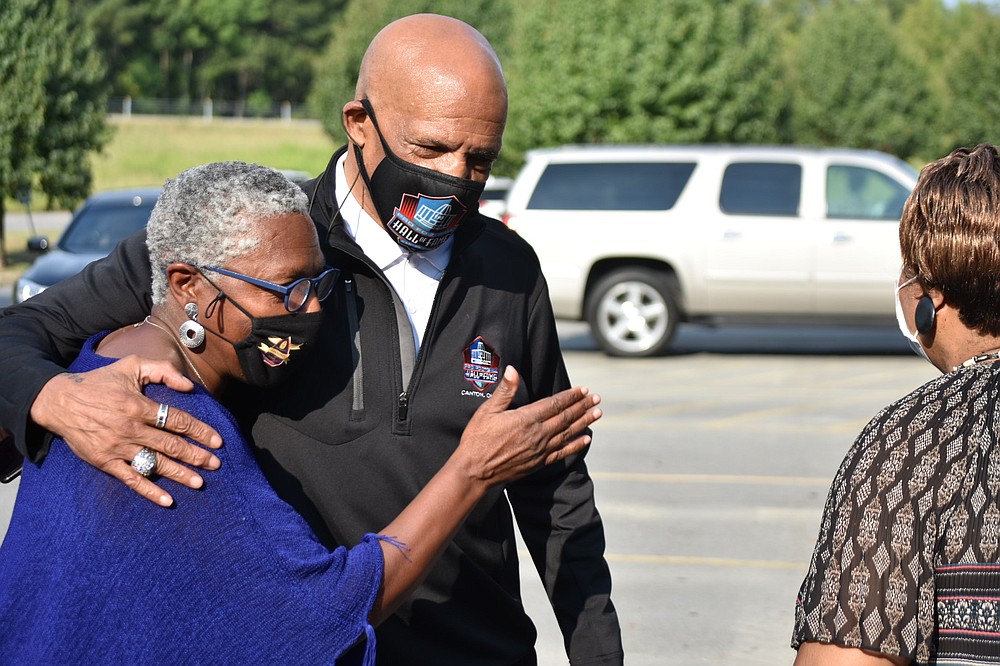 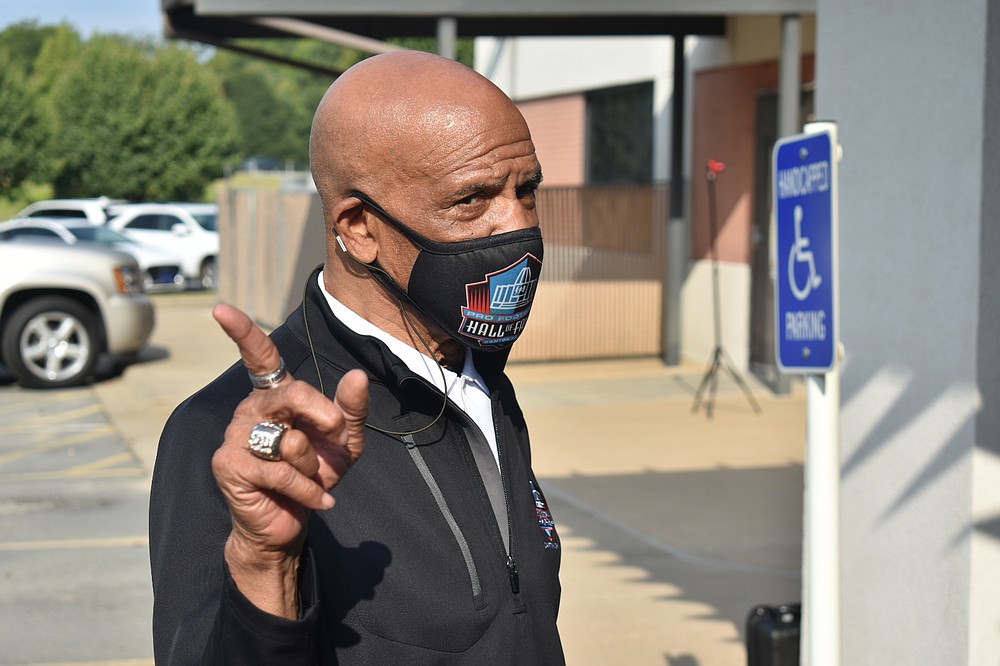 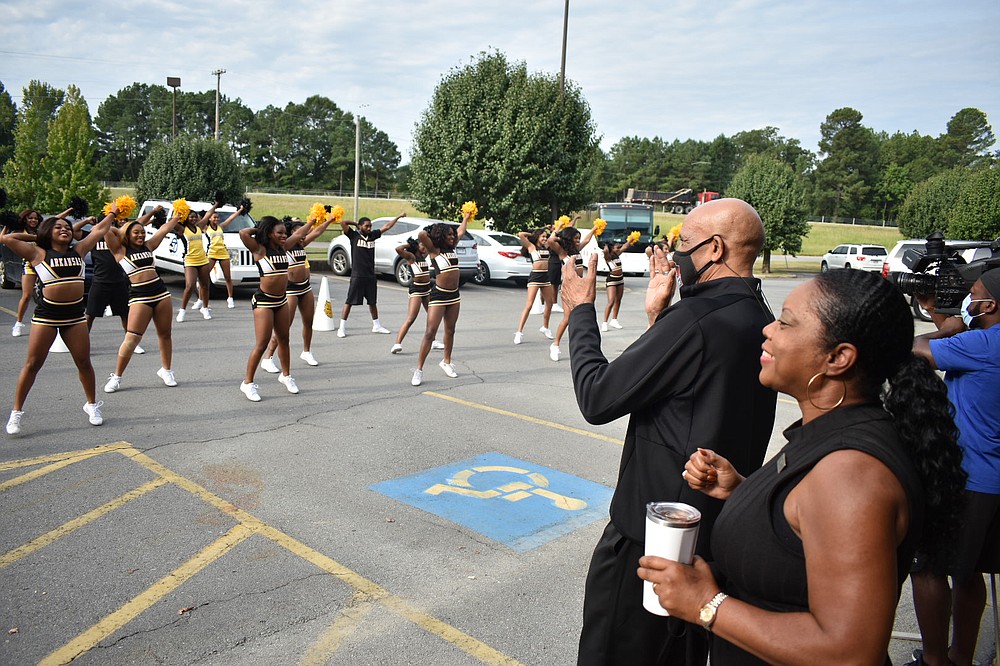 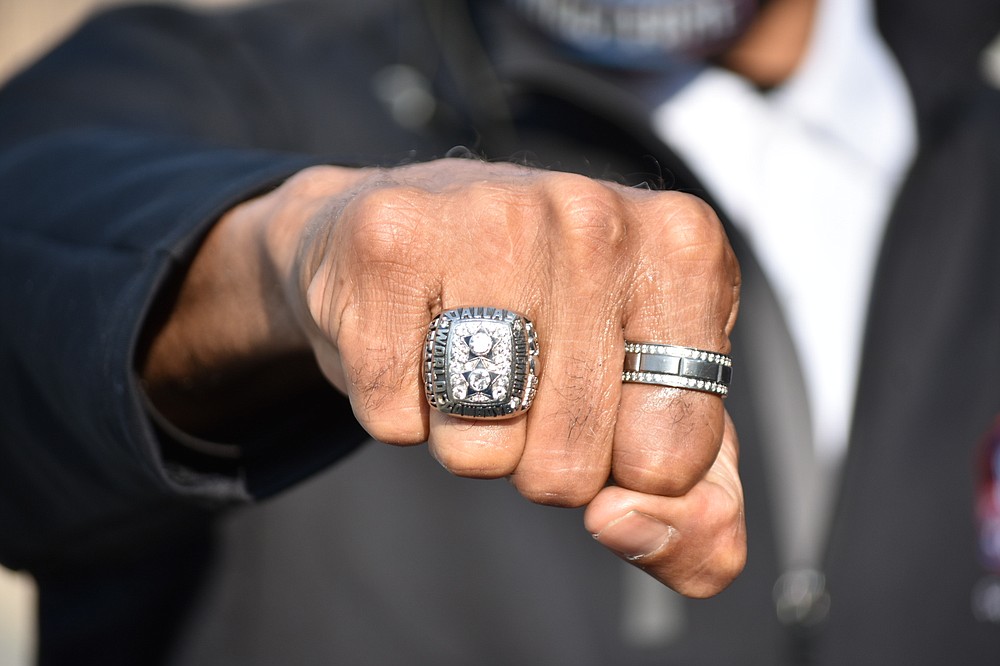 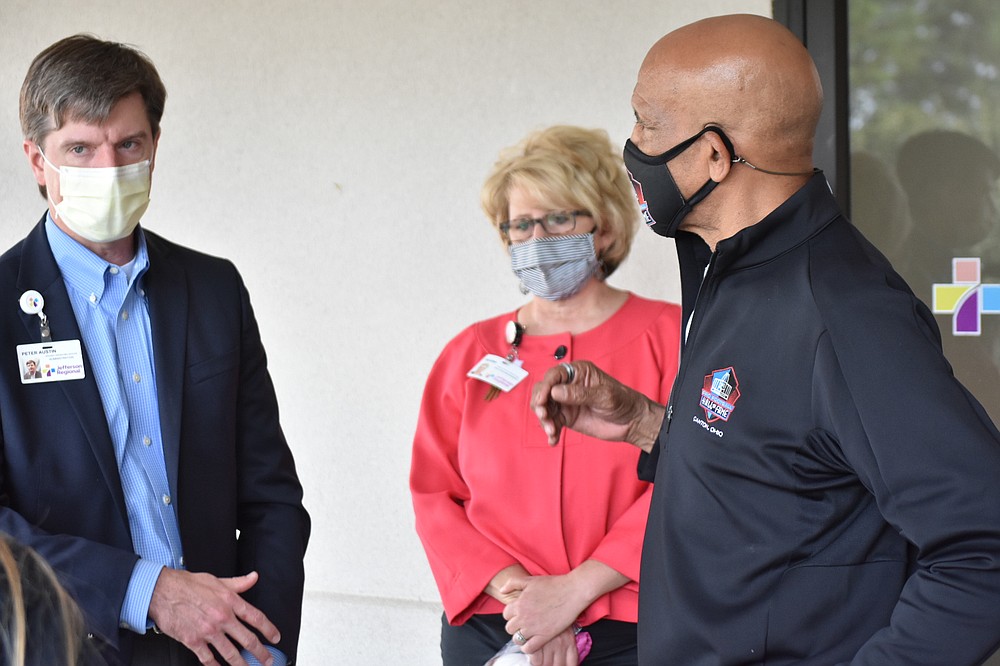 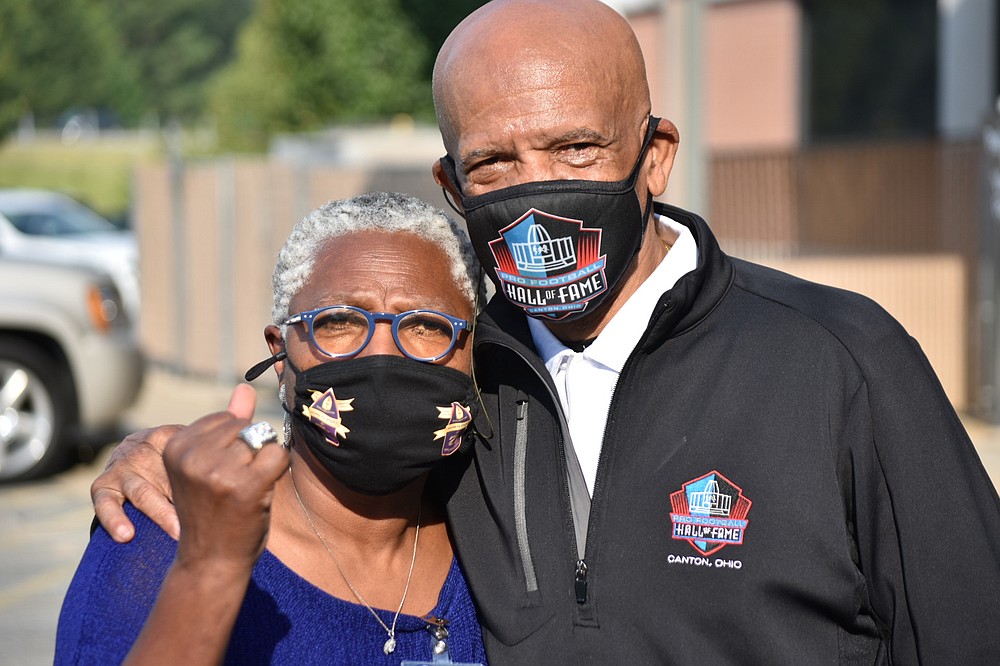 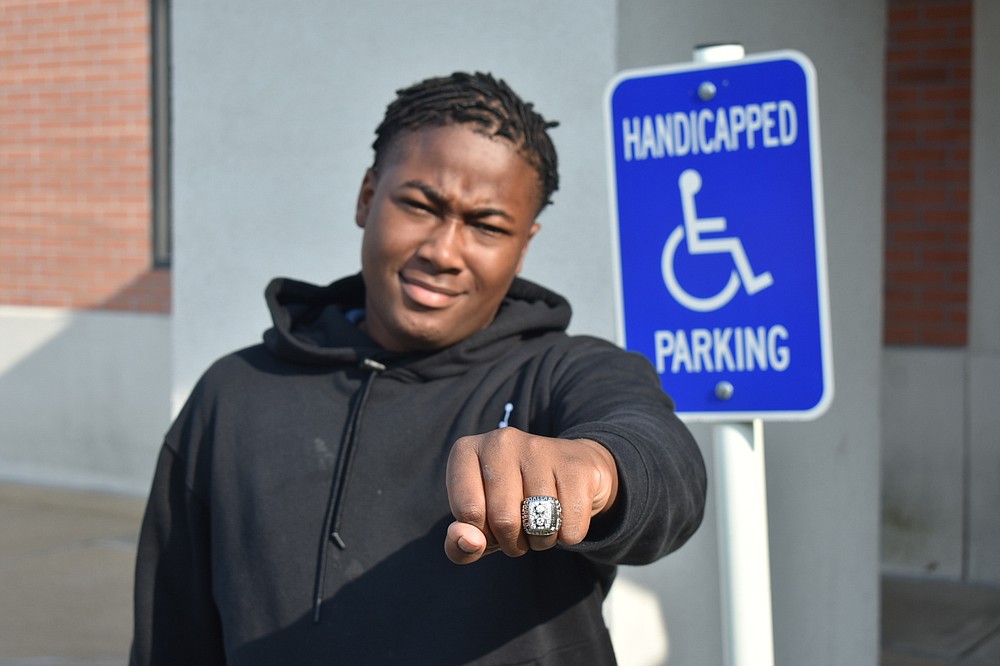