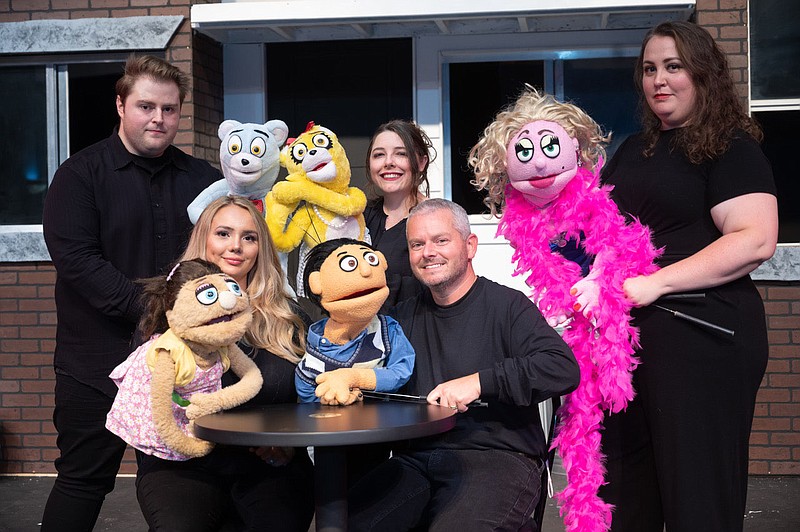 “Most puppets have two rods to work both arms,” explains Lexie Edmunds, who plays Kate Monster in the Arkansas Public Theatre production of “Avenue Q.” “When I get in the zone, and can move Kate — my new bestie — how I want, with ease, it’s a great feeling.” Pictured clockwise are Edmunds (seated left), Edward Mountz, Mary Maxwell, Rachel Lynn Mills and (seated right) Kenny Timbrel, who plays Princeton. (Special to the Democrat-Gazette/Chad Wigington for Arkansas Public Theatre)

Whether Princeton and Kate Monster find their happy ending on "Avenue Q" is in the hands of the puppet gods — and the crazy minds who conceived a musical tale definitely not set on Sesame Street.

But there's a real love story behind the scenes in the Arkansas Public Theatre production opening Friday, and audiences who know about it might just enjoy the play on an entirely different level.

"Avenue Q" opened on Broadway in 2003, and in 2004 beat out "Wicked" to win the Tony Award for best musical, book and score — one of the biggest upsets in Broadway history, says the theater's artistic director Ed McClure.

"I saw it on Broadway when the show first opened. It was amazing, fresh, funny and wildly subversive," says McClure, who is directing the production for the theater. He says he wanted to bring the show to Northwest Arkansas because "it's just so damn original and happy and uplifting and naughty and funny!"

That doesn't mean it has been easy.

Kenny Timbrel, who first appeared at the theater in "Les Miserables," commutes from his home in Joplin, Mo., to play Princeton, the newcomer to Avenue Q. 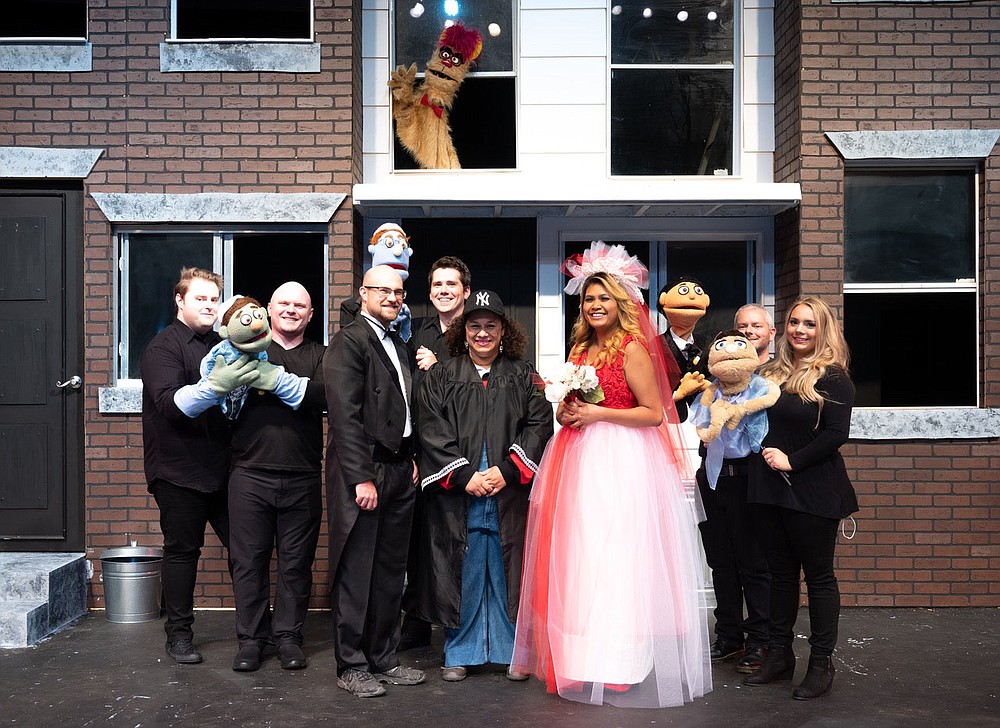 Do the puppets of “Avenue Q” find happiness? Thanks to directors Ed McClure and Brenda Nemec, new music director Wendell Jones and choreographer Alix Barrett, the answers will be revealed in song Friday through Sept. 26 at Arkansas Public Theatre in Rogers. (Special to the Democrat-Gazette/Chad Wigington for Arkansas Public Theatre)

"'Avenue Q' is a special show," he says. "I love that the puppets can be seen alongside their human puppeteers. Although the content is mature, the messages and themes presented in 'Avenue Q' are very relatable. You will leave the theater with a smile on your face."

So far, he says, he has left rehearsal with carpal tunnel syndrome — just kidding, he says — and a "hand [that] wants to follow my feet instead of my voice."

"It was like throwing another wrench into everything," Cody Robinson, an Arkansas Public Theatre veteran who plays multiple characters, including Trekkie Monster, says of the puppets. "There's singing, dancing, acting — and now we also have to be in charge of another person on our hand who has to match everything we do, and make sure those hand movements match our mouth when it moves!"

But for Mary Maxwell, who plays Mrs. Thistletwat and the female Bad Idea Bear, it's the culmination of a dream.

"I've loved 'Avenue Q' since I was about 15 years old watching anime music videos on YouTube set to various songs from the cast recording," she says. "I was over the moon when they announced that we would be doing this show, and I knew I had to be a part of it!"

Kate Monster, the romantic lead to Timbrel's Princeton, is played by Public Theatre veteran Lexie Edmunds — and that's where the real-life love story comes in. She and husband Patrick Edmunds met during the 2016 production of "Spamalot" at the theater, and this is their first time on stage together since the birth of their second son, Jameson, 17 months ago.

"We also have a 4-year-old son, Liam," she adds. "He's already begging to be on stage. He loves to sing and dance. He sometimes sings songs we are working on in shows better than us!"

Lexie says the love story started when she wished for a Coke during a "Spamalot" rehearsal. 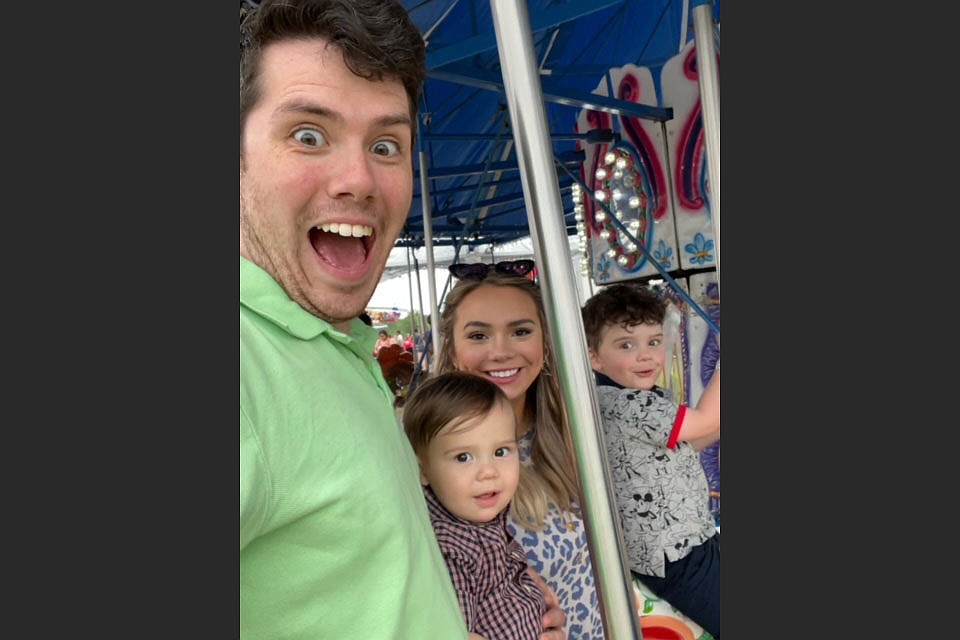 In a real Arkansas Public Theatre love story, Patrick and Lexie Edmunds met during “Spamalot,” and he proposed to her on the stage of the Victory Theatre. Now they have two sons, Liam and Jameson, and are back on stage together in the forthcoming production of “Avenue Q.” (Special to the Democrat-Gazette)

"Patrick ran out the door, and came back and brought me one," she remembers. "He's been wonderful to me ever since."

"I was only cast because Ed [McClure] needed one more guy, and my boss' wife vouched for me, saying that Ed needed to call me even though she had never heard me sing or act," Patrick Edmunds says. "I'm glad he picked up the phone!"

Edmunds even proposed to Lexie on the Public Theatre stage.

"Lexie and I had always been singing for each other," he says. "She told me how one of her dream shows was 'Phantom of the Opera.' We ended up seeing it in New York back in 2016. Seeing it together had a special moment to it.

"So an idea formed in my head that I needed to propose at the place we met using a song — 'All I Ask of You,' which became the first dance at our wedding — that we could sing together.

"I tricked her into coming to the theater one Saturday evening before a 'special dinner' and invited her whole family to hide out in the theater. I asked her to join me on stage to sing one more time together. When we got to the instrumental bridge of the song, her whole family walked into the first floor of the theater as I got down on my knee. Luckily, she said yes!"

Taking care of two children, a job, a home and a rehearsal schedule sounds daunting, but "we have a phenomenal support system of family and friends who are more than willing to watch our boys every night," he says. "It's definitely hard leaving them at night, but after being inside for a whole pandemic plus some, it's important for our own mental health to do something for us," Lexie Edmunds adds. "We just make up for it during the day with lots of playtime.

"It means a lot to us that we get to do something we love together. We are so blessed for this opportunity, and we know how lucky we are."

"It means the world," her husband agrees. "It's where I continue to fall in love with Lexie. She is the most talented person I know. Every time she is on stage, she just shines! The only bad part is that I don't get to watch her perform and experience what the audience is experiencing. I just watch from the wings and cheer her on every step of the way."

*The show contains adult language and situations and is not recommended for children under 17.