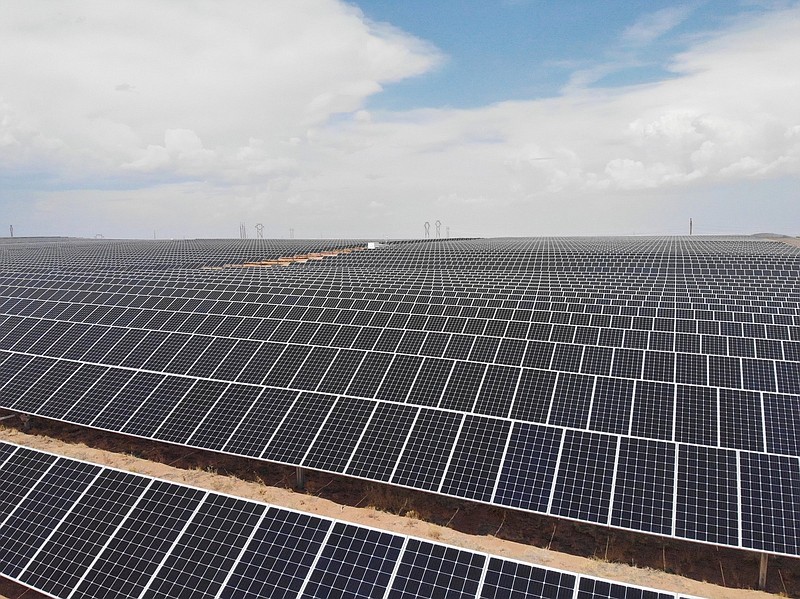 The Biden administration on Wednesday released a blueprint for producing almost half of the nation's electricity from the sun by 2050 -- something that would require the country to double the amount of solar energy installed every year over the next four years and then double it again by 2030.

The expansion of solar energy is part of President Joe Biden's effort to fight climate change, but there would be little historical precedent for increasing solar energy, which contributed less than 4% of the country's electricity last year, that quickly.

Such a large increase, laid out in an Energy Department report, is in line with what most climate scientists say is needed to stave off the worst effects of global warming. It would require a vast transformation in technology, the energy industry and the way people live.

The Energy Department said its calculations showed that solar panels had fallen so much in cost that they could produce 40% of the country's electricity by 2035 -- enough to power all American homes -- and 45% by 2050.

Getting there will mean trillions of dollars in investments by homeowners, businesses and the government. The electric grid -- built for coal, natural gas and nuclear power plants -- would have to be almost completely remade with the addition of batteries, transmission lines and other technologies that can soak up electricity when the sun is shining and to send it from one corner of the country to another.

The new report is consistent with climate and energy plans laid out by Biden during his campaign last year, when he said he wanted to bring net planet-warming emissions from the power sector to zero by 2035. He also wants to add hundreds of offshore wind turbines to the seven in American waters. At a White House event with executives from three of the nation's largest automakers last month, he announced that he wanted electric vehicles to comprise half of all new cars sold by 2030. That goal that will depend in large part on whether there will be enough places to plug in those cars.

But administration officials have provided only a broad outline for how they hope to clean up the country's energy system and its cars and trucks. Many details will ultimately be decided by Congress, which is working on a bipartisan infrastructure bill and a much larger Democratic measure that could authorize $3.5 trillion in federal spending.

The report released Wednesday is not intended as a policy statement or administration goal, officials said. Instead, it is "designed to guide and inspire the next decade of solar innovation by helping us answer questions like: How fast does solar need to increase capacity and to what level?" said Becca Jones-Albertus, director of the Energy Department's solar energy technologies office.

While renewable energy has grown fast, it provides about 20% of the country's electricity. Natural gas and coal account for about 60%. In February, a division of the Energy Department projected that the share of electricity produced by all renewable sources, including solar, wind and hydroelectric dams, would reach 42% by 2050 based on current trends and policies.

"That kind of quick acceleration of deployment is only going to happen through smart policy decisions," said Abigail Ross Hopper, president of the Solar Energy Industries Association. "That's the part where having a goal is important, but having clear steps on how to get there is the issue."

One thing going for the administration is that the cost of solar panels has fallen substantially over the past decade, making them the cheapest source of energy in many parts of the country.

The administration is making the case that the United States needs to act quickly because not doing anything to reduce reliance on fossil fuels also has significant costs, particularly from extreme weather linked to climate change. On Tuesday, on a visit to inspect damage from the intense rainfall caused by the remnants of Hurricane Ida in New Jersey and New York, Biden said, "The nation and the world are in peril."

Biden wants to use tax credits to encourage the use of solar power systems and batteries at homes, businesses and utilities. The administration also wants local governments to make it quicker to obtain permits and build solar projects -- in some places it can take months to put panels on a single-family house, for example. And officials want to offer various incentives to utility companies to encourage solar-energy use.

Jennifer Granholm, Biden's energy secretary, said part of the administration's strategy would focus on its Clean Electricity Payment Program, which would reward utilities for adding renewable energy to the electric grid, including rooftop solar. Many utility companies have fought against rooftop solar panels because they see a threat to their business and would rather build large solar farms that they own and control.

"Both have to happen, and the utilities will be incentivized to take down the barriers," Granholm said. "We've got to do a series of things."