10 to watch for from Toronto 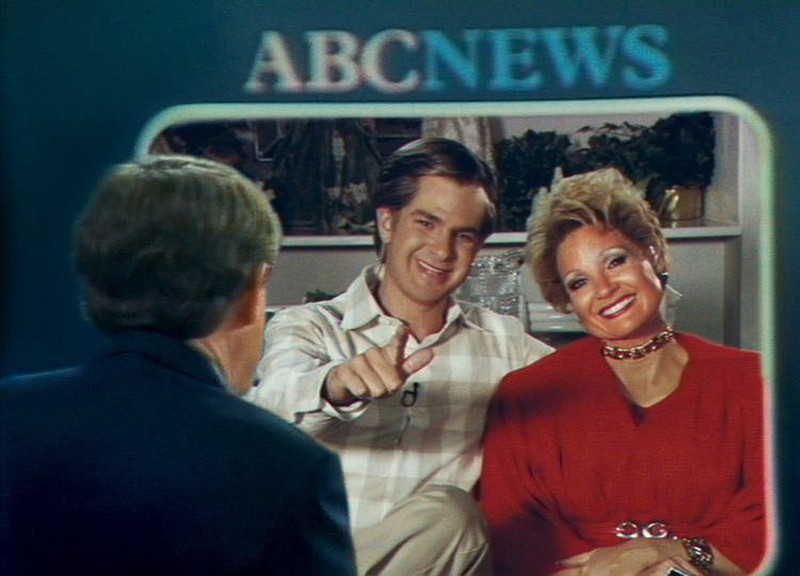 Jim Bakker (Andrew Garfield) and his wife Tammy Faye (Jessica Chastain) rose from humble beginnings to create the world’s largest religious broadcasting network and theme park, and were revered for their message of love, acceptance and prosperity — until it all crashed down in the wake of a sex scandal. Their story is told in “The Eyes of Tammy Faye.”

Much as college football welcomed back thousands of fans to packed stadiums this past weekend (whether that was smart remains to be seen), so too, have major film festivals opened their proverbial (literal?) gates to rabid movie fans, desperate for the glitz, glam, celeb-filled parties, and big-screen showings of a true International Cinematic Event.

In the past few weeks, we have seen annual biggies like Venice and Telluride host full-on, everyone-is-invited (*with Vax cards) galas, accompanied by the usual assortment of breathless tweets from critics, and wild energy red carpet schmoozings -- including, in one celebrated case, some sensuous arm-chewing (that last reference is indeed very specific, and refers to an event that thoroughly dominated Film Twitter all weekend long: If you'd care to investigate, look up the red carpet premiere of "Scenes From a Marriage" at Venice).

Continuing the momentum, the Toronto International Film Festival begins this week, and, like the others, promises an absolute riot of exciting new features -- some of which having premiered already at Cannes, and the aforementioned fests, some of which are world premieres. In fact, after a year in which many festivals were puttering along on impulse power, and studios holding on the release dates until 2021, one could easily argue this year's line-up is like 1.5 times the normal hype.

If there is a fly in this particular ointment, it's for those of us, like yours truly, who, by dint of immunosuppression-serving medications, can't actually attend the festival in person this year, and must instead use the festival's "Digital Pro" virtual screening room, which, alas, does not include several of the biggest and most anticipated features -- a drag, to be certain, but not deal breaking by any means.

Here are 10 of the most hyped features to play at the Toronto International Film Festival, nonetheless, with my additional 1-10 score of Anguish at not being able to see them at the festival, when applicable.

"A Hero": Any time Iranian auteur and international treasure Asghar Farhadi has a new film out, it's cause for equal parts elation and curiosity. His films play like spiral-pattern mysteries, with small, seemingly innocuous gestures eventually becoming hugely significant. His newest involves a man imprisoned for unpaid debt, suddenly freed, and forced to contend with his life on the outside all over again.

Anguish Score: 10. Plaintive contact with the film's publicist have gotten me nowhere to this point, but like one of Farhadi's long-suffering protagonists, I will keep holding out hope.

"Bergman Island": Well, if you're going to go and create a film under the auspices of another auteur, you might as well go with a legendary one. Mia Hansen-Love's drama indeed takes place on the island of Faro, the secluded Baltic retreat where the great Swedish director Ingmar Bergman lived and made several of his films. Arriving to take in the sights and sounds are a filmmaking couple, played by Tim Roth and Vicky Krieps, there to work on their own projects, and, one can surmise, their relationship.

"Dune": I will say this is not necessarily a film I would be falling over myself to see -- despite its mostly warm reviews coming out of Venice -- but a chance to watch it on the big screen, in front of an adoring Canadian audience (the film is directed by Denis Villeneuve, Quebec native) is still a significant loss. Whether the celebrated sci-fi director can make Frank Herbert's sprawling novel any more coherent than David Lynch did in 1984, remains to be seen, but we can imagine the imagery and art direction will be worth the price of admission alone. This will also be a huge TIFF title for celeb sighting purposes: Included in this cast are Timothee Chalamet, Zendaya, Rebecca Ferguson, Oscar Isaac and Josh Brolin, most of whom will be attending the premiere.

Anguish: 5. Each year, the Toronto festival offers up a big Hollywood vehicle or two, and the track record is pretty spotty.

"Last Night in Soho": British filmmaker Edgar Wright has long-ago reached cult status, as the comic visionary behind "Shaun of the Dead," "Scott Pilgrim vs. The World," and "Baby Driver," so it is not surprising the amount of advance buzz this title received before it premiered at Venice last week. Reviews were pretty strong, ranging from "enjoyable" to "revelatory," for what it's worth. The story involves a modern day fashion student (Thomasin McKenzie), who somehow is able to transport herself to the swingin' '60s in London, where she partially inhabits the consciousness of a young singer (Anya Taylor-Joy), trying to make the scene. Macabre comedy? Mirthful mystery? Whatever it is, it sounds absolutely gear.

Anguish: 7. Very excited to see it at some point, but I will definitely get my chance soon enough.

"Spencer": One of the positively incandescent films to play Venice, with calls for lead Kristen Stewart to win all the acting awards, Pablo Lorrain's gentle interpretation of the life of Princess Diana, during one fateful holiday weekend with the Royal Family, as news of her husband's egregious infidelity has suddenly become public knowledge, has fantastic potential. An accompaniment, of sorts, with Lorrain's 2016 film "Jackie," also about a world-famous woman having to navigate extremely treacherous waters on her own, the buzz was positively deafening about this one.

Anguish: 8. I know everyone claims they always knew Stewart was a genuinely talented actress now, but I've been carrying her water since she was 12 in "Panic Room", and have no intention of stopping now.

"The Eyes of Tammy Faye": Keep in mind, the Toronto International Film Festival was the festival that launched "I, Tonya," a few years back, featuring another sympathetic portrait of a much-maligned woman, to great acclaim for actress Margot Robbie. Here, the heavy lifting is done by Jessica Chastain, who plays the genuinely sweet-hearted wife of an "evangelist sociopath" (played by Andrew Garfield). Michael Showalter's film promises a deeper understanding of the much-mocked Tammy Faye, and, perhaps, a bit of a benediction.

Anguish: 4. I definitely would have seen it, but it wouldn't have killed me to wait until later.

"The Power of the Dog": Jane Campion's first feature since 2009's "Bright Star," features what sounds like an epic performance from Benedict Cumberbatch as the imposing older brother of a farming family in 1920s Montana. When his kid brother (Jessie Plemons) marries a local widow (Kirsten Dunst) with a grown son (Kodi-Smit McPhee), tension between the brothers reaches a high boiling point. Much revered at Venice and Telluride, it promises a much welcome return by one of cinema's great living auteurs.

Anguish: 9. I would have seen anything by Campion, anyway, but from its reverent critical reception at the previous festivals, it would have nearly topped my list.

"The Rescue": Documentary filmmakers E. Chai Vasarhelyi and Jimmy Chin are known for their mountaineering epics ("Free Solo," "Meru"), but this film, concerning the harrowing assisted escape for young Thai soccer team members forced to hold up in a cave during a raging monsoon until they were trapped, takes us not up in the clouds but down in the depths. The film follows the rescue operation from the perspective of the many world-class divers who were brought in to craft an escape route, at much peril to everyone involved.

"The Worst Person in the World": Garnering a big buzz at Cannes, where star Renate Reinsve won the Best Actress prize, Joachim Trier's final film in his "Oslo" trilogy, finds the director once again dealing with the impetuousness of youth. At least, in this case, in the form of one woman (Reinsve), whose many impulses and changing moods lead her to make one life altering decision after another, without necessarily stopping to form a coherent plan other than to find out the limits of who she really is -- and can be.

Anguish: 6. The Cannes buzz was substantial, and Trier is a talent.

"Titane": Another highly lauded film out of Cannes, Julia Ducournau's explosive follow-up to her celebrated debut "Raw" sounds even more perplexing and unhinged than her first film, and I meant that in an entirely good way. This one features all sorts of oddities, including a steel plate placed inside a child's skull, an auto-erotic fixation (in the sense that the protagonist is ... moved by cars), and the love of a good firefighter, topped off with (un?)healthy amounts of body horror, and the raging spirit of a unique artistic sensibility. Let the good times roll!

Print Headline: 10 to watch for from Toronto