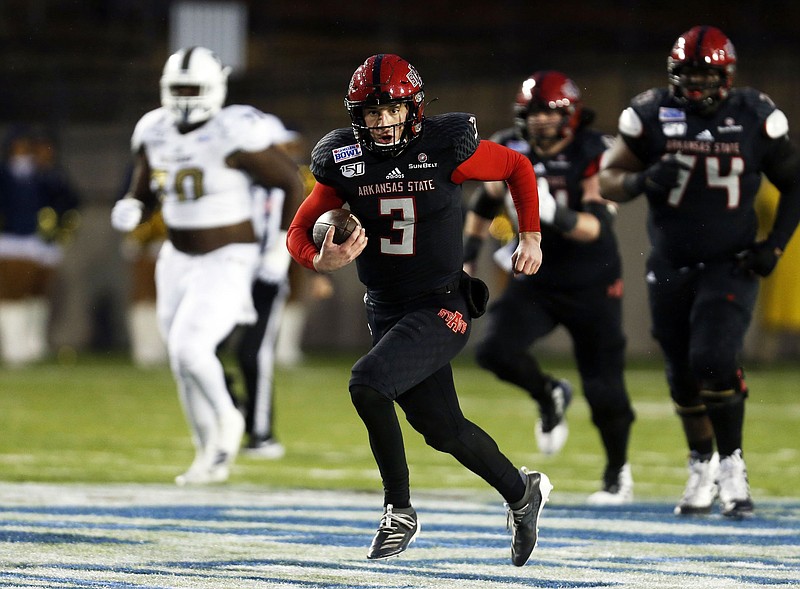 ArkArkansas State quarterback Layne Hatcher impressed Coach Butch Jones when both were at Alabama in 2018. “Layne’s work ethic and drive were every bit as good or more than all of them,” Jones said of the quarterbacks on the Alabama roster, including Jalen Hurts, Tua Tagovailoa and Mac Jones. “He never got down, never got frustrated, just kept working his craft. And that’s Layne. He’s a unique individual in terms of that.” (AP file photo)

Every summer, former Alabama quarterbacks coach Dan Enos gave each of his players a series of individual drills. Although players were on campus, NCAA restrictions limited the Crimson Tide coaches in the time they could work with the team.

But it didn't mean they couldn't watch from afar. Offensive coordinator Mike Locksley had about as good a view as anyone, with the window from his office looking out onto Alabama's practice fields.

Seemingly every time Locksley glanced out during that 2018 summer, there was Layne Hatcher.

"There would be one guy doing the drills full speed," Locksley, now the head coach at Maryland, told the Arkansas Democrat-Gazette. "I just said, 'Here's a preferred walk-on and he's not doing it because he knows we're looking.' In the back of my mind, it just said to me that this kid's a hard worker and takes pride in being a quarterback."

In his one season with the Crimson Tide, Hatcher never saw the field. He didn't even travel for road games. He was, however, a member of Alabama's absurdly deep quarterback room that included Jalen Hurts, Tua Tagovailoa and Mac Jones, all three of whom will start Sunday in their NFL season openers.

"It was four guys who are confident, alpha male type of guys who believe in themselves as much as anybody in the world," Hatcher told AL.com earlier this year. "Every guy believed in himself, and it made the room stronger because of the confidence and abilities each guy had."

Hatcher displayed that confidence when he seized the chance to be a walk-on for legendary head coach Nick Saban and the Crimson Tide. He had initially committed to Arkansas State University before Saban reached out in May 2018, a few months after Hatcher and Pulaski Academy won a fourth consecutive state championship.

"Nick Saban has the Midas touch," former Pulaski Academy Coach Kevin Kelley said. "When he calls, it's worth listening to. ... [And] it's hard to turn Nick Saban down."

The Bruins used a pass-heavy offense under Kelley, and Saban said earlier this week that he was interested in Hatcher as a player who was familiar with Spread schemes.

That summer was the start of transitioning from "the old Alabama offense" to "the new Alabama offense," featuring more run-pass options and receiver-heavy sets rather than "a pound-the-ball [and] play-action pass [offense]."

Coming off a championship season, the Crimson Tide had an ongoing battle for the top quarterback spot -- Tagovailoa had replaced Hurts during the national title game in January and ultimately held off Hurts for the starting gig that fall.

Jones was entrenched as Alabama's No. 3, as Locksley recalls. But Kelley and Hatcher believed Layne could fight for that role.

"Maybe he and I were the only two in the world that thought [it], but he and I both thought he could compete with Mac Jones," Kelley said. "Of course, Mac is phenomenal ... but that's Layne's mindset."

Hatcher never got there, spending the fall of 2018 as the fourth quarterback for a team that ripped off 14 consecutive victories before losing to Clemson in the College Football Playoff championship.

But his presence didn't go unnoticed by Saban, even if he was surrounded by three others who would eventually hear their names called in the first two rounds of the NFL Draft.

"They all wanted to be really good players, and I think they all invested their time and worked on doing the things they needed to to be the best players that they could be," Saban said. "Layne Hatcher was really the same way. He had a great attitude, he was a hard worker and he did whatever he could to contribute to the team.

"Each one of those individuals just had the right stuff, and in 2018, none of them were the players they are today."

Sunday afternoon, Hurts will take the reins as the Philadelphia Eagles' starting quarterback when they visit the Atlanta Falcons. Jones will make his NFL debut, beginning his rookie campaign as the New England Patriots host Tagovailoa and the Miami Dolphins.

Hatcher, who was not made available by ASU for this article, will likely be somewhere in Jonesboro after the Red Wolves play Memphis in a Week 2 contest Saturday night.

Perhaps he'll watch his former teammates with ASU Coach Butch Jones, who was also with Alabama during that 2018 season as an offensive analyst.

While Jones didn't know he'd coach Hatcher again three years down the line, he recognized a player that managed to impress amidst a crowd of immense talent.

"Layne's work ethic and drive were every bit as good or more than all of them," he said of the four quarterbacks. "He never got down, never got frustrated, just kept working his craft. And that's Layne. He's a unique individual in terms of that."

Locksley recalls Hatcher being relatively quiet in that quarterback room. So too was Hurts, who the former Crimson Tide offensive coordinator described as "an old soul."

Tagovailoa and Mac Jones were the more lighthearted of the group. Tagovailoa even brought his guitar into meetings and regaled the group with Christmas songs when things got tense.

Each had their own personalities, but Butch Jones believes the group was successful because they were all leaders in their own way and ultimately wanted one another to succeed.

"Those guys are best friends," he said. "They knew that only one individual could play, but they were going to constantly push and make each other better."

That's happened to this point. Tagovailoa, Hurts and Mac Jones were Heisman Trophy finalists each of the ensuing three years. Jones led Alabama to its 12th national title last fall. And Hatcher's father's prediction from a few years ago has almost entirely come to fruition.

"[He] would always say, 'There's four NFL quarterbacks in that room,'" Hatcher told 247Sports earlier this year. "That was his way of building me up. Little did he know."

Hatcher led the nation in yards per completion last season (17.7) and averaged 187 yards per game despite playing less than half of ASU's offensive snaps. He needed just a dozen passes a week ago to throw for 150 yards and four touchdowns.

The quarterback situation may remain in flux heading into Saturday's meeting with Memphis -- James Blackman started last week's season opener before Hatcher spelled him -- but the traits that could tip the battle in Hatcher's favor have long been there.

"He may not have the strongest arm, he may not be the fastest, but he is wired as a winner," Locksley said of Hatcher. "He wills himself to make plays, and to me, his mental makeup is what separates him."