Before and after the towers fell 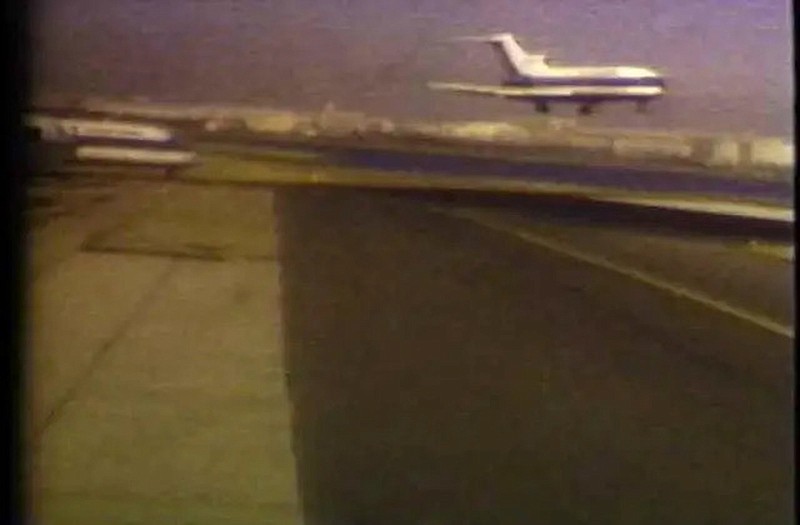 The image depicts a scene from Hans Stiritz’s “Before”: a poetic five-minute movie stitched together from Stiritz’s family’s archival footage of their airplane trips during the 1960s and ’70s.

On the last day of the Before, we were at the Toronto International Film Festival.

I spent the Monday afternoon of Sept. 10, 2001, talking with Arliss Howard and Debra Winger about our mutual friend, the Mississippi novelist Larry Brown, upon whose short stories they built their movie "Big Bad Love." Howard directed the movie and, with the help of his younger brother Jim, adapted Larry's stories into a screenplay. He also played the main character, Leon Barlow, obviously based on the author.

I had hoped to see Larry in Toronto, but "Big Bad Love's" production budget was small, so he didn't make the trip.

I talked to the "Big Bad Love" filmmakers in the afternoon; I think the last movie I saw in the Before was David Lynch's "Muholland Drive." I remember Karen and I watched it together, one of the few times we watched something at the same time at that festival. (Between us, we watched 30 movies at the 2001 festival -- each of us saw five or six per day.)

I might be wrong about that; the press screening for "Muholland Drive" might have been the night before. But for the sake of poetry I remember it as the last movie we saw in the Before, for it was the last great movie of the Before.

In the Before, a newspaper had the budget to send two writers to a foreign film festival for five days. In the Before, Toronto was one of our regular cities; we knew where to buy wine, what restaurants to avoid.

We checked out of our hotel, a recently converted high-rise apartment building and took a taxi to the airport. We zipped through security and customs at Pearson International Airport, and were standing in line to get a sandwich to take on the plane.

There was a TV monitor fastened about 10 feet high on a column a few feet ahead of us; I looked up at it idly and my first thought upon seeing the jetliner crashing soundlessly into a tall building was that the special effects team could have made it look more spectacular.

It didn't register as real. I was in a mode to take the footage as a movie trailer. Or maybe not. I heard a man curse. We milled about, we headed down the corridor to our gate and only when we got there did we realize our flight had been canceled. Something felt tilted as we swam back against the current, back out through security the wrong way.

Somehow I arrived back at the check-in counter, where a preoccupied Delta agent told us there was something wrong with our plane, that we'd have to be re-booked. All the while he was tapping away on a keyboard that wasn't giving him anything back.

"I don't understand," he said through an apologetic smile. "I've never seen this before. U.S. airspace has been closed." At that moment his supervisor appeared and whispered in his ear. I caught some of it -- flight numbers. Commercial airliners.

Things were snapping into place. I told them what we'd seen on television, three, maybe five minutes earlier. We all realized at the same time the seriousness of what had happened. It's the moment where our lives broke in half. When we were hurled into the After.

None of us knew what to do, so adrenaline took over.

Karen went to the pay phone -- we didn't have mobile devices, yet, and if we'd had them we'd have left them at home to avoid international roaming charges -- to call our hotel, to try to get our room back. The Delta agent provisionally booked us on a next-day flight. I went to the Thomas Cook counter and got some fresh Canadian cash.

A woman stood in the middle of the ticketing hall crying softly into her cellphone.

We got in a limo and rode back to Toronto, as our driver -- a tidy middle-aged Sikh in a blue blazer and crisp white shirt -- told us they'd hit the World Trade Center in New York, the Sears Tower in Chicago, and that a car bomb had gone off in front of the State Department.

I held Karen's hand and rather self-dramatically told her it would never be the same again, that we were in a different kind of war.

I told her we'd need to somehow get to New York, that maybe we could rent a car, it was about an eight-hour drive away. But by the time we'd got back to the hotel and called the office, the border had been sealed and a security perimeter had been set for 50 miles around New York. No rental cars were available anyway. The Hollywood Elite had snapped them up.

So we went back to the festival, to sit in the dark for a while. We went to a screening of "Pinero," a film by Leon Ichaso about Miguel Pinero, the Puerto Rican poet and playwright who rose to prominence as a co-founder of the Nuyorican Poets Cafe in the mid-1970s. About 15 minutes into the film, which is set on New York's Lower East Side, a festival volunteer announced that the screening, along with all other screenings planned for that day, was canceled, as were all news conferences and social events.

So we wandered over to the festival's press lounge in the Park Hyatt, in the press room set up for the Toronto International Film Festival. For a while we sat on the floor with 100 other journalists from all over the world, watching what the CBC warned was raw unedited footage. They showed a thrashing figure leaping -- or falling -- from one of the towers. They showed people cheering in the West Bank. Someone cursed, someone giggled nervously, heads turned. The Toronto Star took our picture.

We left, to walk the streets. Bomb threats were being phoned in, to Ottawa. There was a police and fire cordon around a block of Bay Street in front of the Royal Ontario Museum. Karen asked what it was about and the fireman told her "public safety." We ate our airport sandwiches in a park filled with college students, black squirrels and mild sunlight. There were hand-lettered signs in the shop windows: "Our Canadian hearts are with you." There was a little girl on the television saying it was sad because Canada and America were the same. Stores were closed, tall buildings emptied. Everywhere were tender looks and soft words; patience spread like a balm.

We got out the next day on the first bus across the border in the After; it took us to Buffalo, we took another bus to Cleveland, where we rented a car and drove straight through to Little Rock under empty skies and got on with the second part of our lives.

A couple of years later, at an open screening at the Hot Springs Documentary Film Festival, I watched a short film by Hans Stritz, a filmmaker and composer who lives in Russellville. Stritz made a powerful, evocative film called "Before" by marrying found video of his relatives' home movie footage taken of (and from) commercial airliners in the late 1960s and 1970s to a mournful, throbbing score for the film. You can see it on his website at eveningfilms.com

Print Headline: Before and after the towers fell