Thousands of other requests rejected by MATTHEW PERRONE THE ASSOCIATED PRESS | September 10, 2021 at 2:03 a.m. 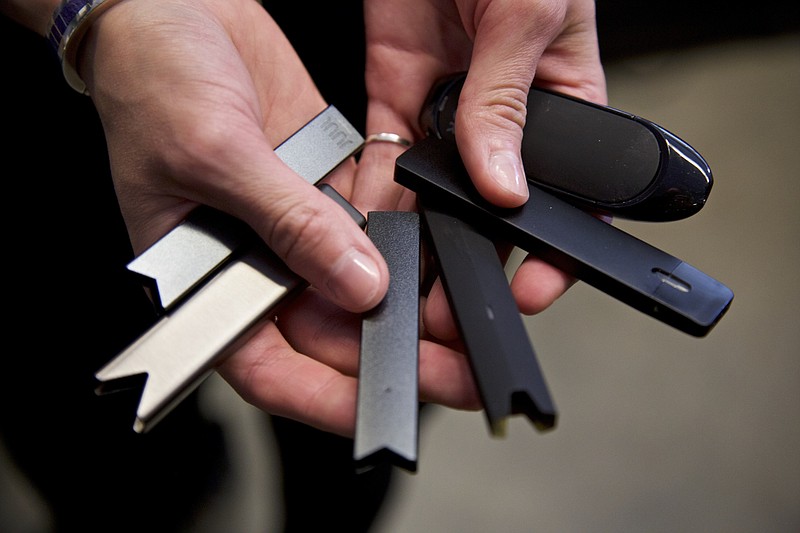 FILE - In this April 16, 2019 file photo, a researcher holds vape pens in a laboratory in Portland, Ore. On Thursday, Sept. 9, 2021, U.S. health officials delayed a high-stakes decision on whether to permit best selling vaping brand Juul to stay on the market, while ordering thousands of other electronic cigarettes off store shelves. (AP Photo/Craig Mitchelldyer, File)

WASHINGTON -- Federal health officials Thursday delayed a decision on whether to permit bestselling vaping brand Juul to stay on the market, while banning the sale of thousands of other electronic cigarettes.

The Food and Drug Administration said it rejected nearly 950,000 marketing applications for e-cigarettes and related products, mainly because of the devices' potential appeal to underage teens. Some of the products are currently being sold while many others were only proposed by manufacturers. But the agency didn't rule on Juul, the most popular brand with adult smokers and many teens.

Parents, politicians and anti-tobacco advocates have pressured the FDA for years to ban Juul's high-nicotine devices, which many blame for the recent spike in underage vaping. But the agency said it would need more time to rule on that company's products.

"There's more work to be done to complete our remaining reviews and ensure that we continue taking appropriate action to protect our nation's youth from the dangers of all tobacco products, including e-cigarettes," the agency said in a statement. The agency noted 80% of teens and children who vape use flavored products.

Thursday's action is part of a review by the FDA to bring scientific scrutiny to the multibillion-dollar vaping industry after years of regulatory delays. The agency has yet to authorize any vaping product as a less harmful option for smokers.

The FDA faced a court deadline Thursday to issue decisions on marketing applications from Juul and hundreds of other companies. The date was set by a federal judge after anti-tobacco groups successfully sued the FDA to speed up its review.

To stay on the market, companies must show that their e-cigarettes benefit public health. In practice, that means proving that adult smokers who use the products are likely to quit or reduce their smoking, while teens are unlikely to get hooked on them.

FDA regulators previously said they would prioritize Juul and a handful of other key players, but none were included in the agency's announcement.

The delay was immediately panned by anti-vaping groups.

"This is an outrageous move by FDA," said Meredith Berkman, co-founder of Parents Against Vaping E-cigarettes. "Millions of families whose kids' lives have been upended by the youth vaping epidemic created by Juul have waited long enough for action."

The FDA didn't indicate when it might rule on Juul and other major manufacturers. Matthew Myers, president of the Campaign for Tobacco-Free Kids, said his group will go back to court if the FDA doesn't clarify its timeline for the remaining decisions.

E-cigarettes first appeared in the U.S. more than a decade ago with the promise of providing smokers a less harmful alternative to smoking traditional tobacco cigarettes. The devices heat a nicotine solution into a vapor that's inhaled.

But there has been little rigorous study of whether the e-cigarettes truly help smokers quit. And efforts by the FDA to begin vetting vaping products and their claims were repeatedly slowed by industry lobbying and competing political interests.

Today, the vaping market includes hundreds of companies selling an array of devices and nicotine solutions in various flavors and strengths. But the vast majority of the market is controlled by a few companies including Juul Labs Inc. -- which is partially owned by tobacco giant Altria -- and Vuse, part of cigarette-maker R.J. Reynolds.

Juul accounts for nearly half of the $4 billion U.S. market but sales have fallen sharply from when the company controlled more than 75%. In 2019, the company was pressured into halting all advertising and pulling all of its flavors except for menthol and tobacco.

The FDA received applications for more than 6 million vaping products. The agency said Thursday it has taken action on 93% of those applications, including for 4.5 million products that were immediately rejected because they were missing key information.

The vaping issue took on new urgency in 2018 when Juul's high-nicotine, fruity-flavored cartridges became a nationwide craze among middle and high school students, leading the FDA to declare an "epidemic" of underage vaping. Last year, the FDA limited flavors in those small vaping devices to just tobacco and menthol, and teen vaping dropped. But the question of whether e-cigarettes should be sold at all remained.

Most experts agree the chemicals contained in e-cigarette vapor are less harmful than tobacco smoke, which contains thousands of cancer-causing chemicals.

"E-cigs and other reduced harm products present a fantastic opportunity to replace cigarettes with far less dangerous products," said Jonathan Foulds, an addiction and public health specialist at Penn State University. "But I'm concerned this may be the start of an overly aggressive regulation for e-cigarettes -- especially compared to how we treat regular cigarettes."