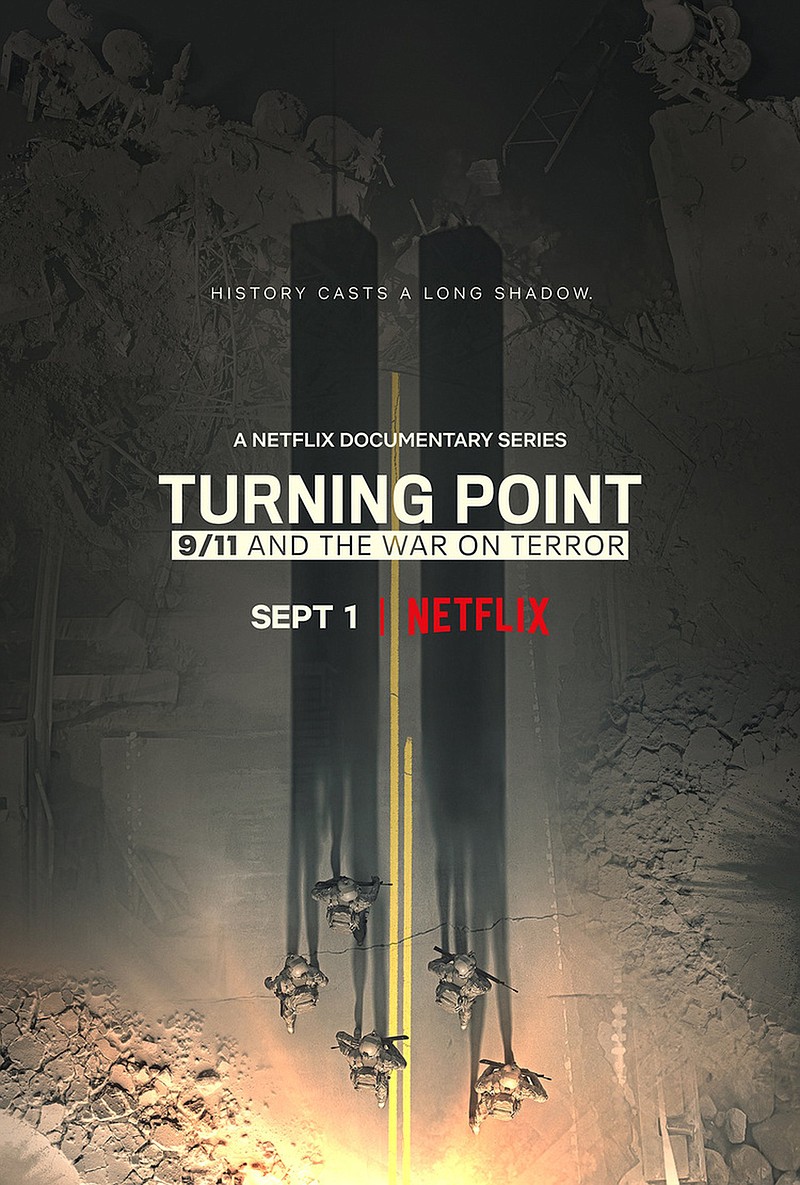 Turning Point: 9/11 and the War on Terror

"Turning Point: 9/11 and the War on Terror" (TV-MA, Netflix) Who attacked the U.S. on Sept. 11, 2001, and why? What breakdowns in intelligence allowed it to happen? How did decisions at the highest levels of three administrations in the war on terror bring us to this moment? This provocative five-part documentary series features interviews with officials from U.S. presidential administrations, former CIA members, U.S. military veterans, Taliban commanders, and Afghanistan National Army soldiers, government members, warlords and civilians. Directed by Brian Knappenberger.

"Whelm" (not rated, 1 hour, 54 minutes, Amazon Prime Video, Vudu, Apple TV) Set in the time of the Great Depression, this intermittently tense, chatty and slow-moving gangster thriller concerns two rural brothers who get mixed up in a rivalry between a notorious bank robber and a curious young criminal, which turns out to have implications in a larger historic story. With Delil Baran, Francesca Anderson, Ronan Colfer; written and directed by Skyler Lawson.

"Into the Lost Desert" (PG, 1 hour, 23 minutes, Tubi) An inspiring documentary that follows 50-year-old explorer Max Calderan in his effort to cross the Rub' al Khali in the Arabian peninsula, the last uncharted desert o earth, with average temperatures of 117 degrees, along with poisonous snakes, spiders, scorpions and constantly shifting sand dunes. Directed by Christopher Cassel.

"A La Calle" (not rated, 1 hour, 50 minutes, HBO Max) Directed by Nelson G. Navarrete and Maxx Caicedo, this closely focused and very human documentary is a chiseled account of the extraordinary efforts of ordinary Venezuelans to reclaim their democracy from the dictatorship of Nicolas Maduro, whose corrupt and brutal policies plunged the country into economic ruin.

"Blood Brothers: Malcolm X & Muhammad Ali" (PG-13, 1 hour, 35 minutes, Netflix) Inspired by the book "Blood Brothers: The Fatal Friendship Between Muhammad Ali and Malcolm X" by Randy Roberts and Johnny Smith, this documentary employs archival footage, in-depth interviews and media reports to chronicle the friendship -- powered in part by their battle against white oppression -- between an Olympic champion and a former convict transformed into an intellectual revolutionary. Directed by Marcus A. Clarke.

"Malignant" (R, 1 hour, 51 minutes, HBO Max) This is what happens -- at least in a violent horror mystery -- when dreams turn out to be terrifying realities, as experienced by a tormented woman. With Annabelle Wallis, Maddie Hasson, George Young; directed by James Wan.

"Kate" (R, 1 hour, 46 minutes, Netflix) An action thriller in which an experienced assassin, working in Tokyo, blows an assignment and, as payback, is infected by a fatal poison that leaves her less than 24 hours to figure out who ordered her demise and come up with a suitable plan for revenge. With Mary Elizabeth Winstead, Michiel Huisman, Jun Kunimura, Miku Martineau, Woody Harrelson; directed by Cedric Nicolas-Troyan.

"Detainee 001" (not rated, 1 hour, 28 minutes, Showtime) A timely documentary, loaded with archival footage and family input, that explores the mysteries that led young American John Walker Lindh (William Barker) to travel to Afghanistan and aid the Taliban in 2002 in an uprising that led to the death of CIA officer Johnny Micheal Spann, for which Lindh, after pleading guilty was sentenced to 20 years in prison (he was released on probation in 2019 after serving 17 years; his whereabouts are unknown). Directed by Greg Barker.