Lawmakers seek to intervene in attorney general, Allport charter accord 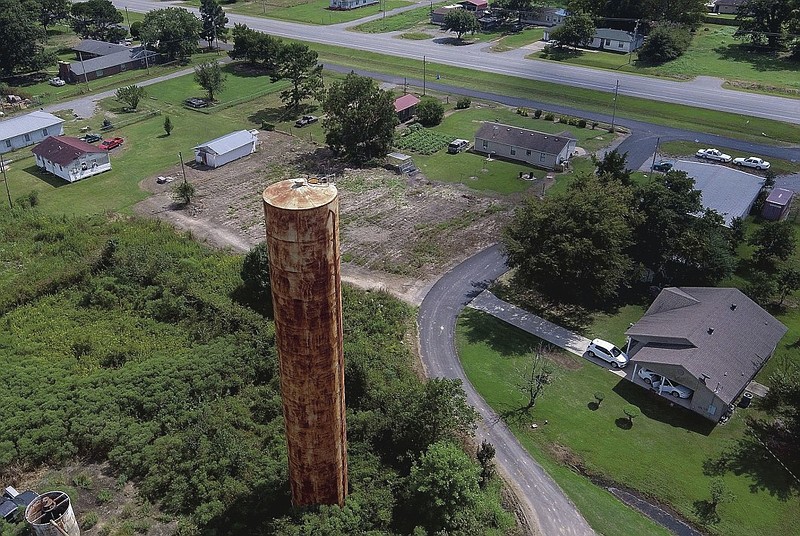 A rusted water tower marks the town of Allport in Lonoke County in this Sept. 16, 2020, file photo. (Arkansas Democrat-Gazette/Staton Breidenthal)

A legislative committee's co-chairmen are seeking to intervene regarding a Pulaski County circuit judge's order secured by Attorney General Leslie Rutledge to allow the judge to revoke the charter of the town of Allport in Lonoke County if the town fails to comply with municipal accounting laws.

Arkansas Legislative Audit legal counsel Frank Arey filed a motion last week to intervene in Pulaski County Circuit Court on behalf of the Legislative Joint Auditing Committee co-chairmen, Sen. Ronald Caldwell, R-Wynne, and Rep. Richard Womack, R-Arkadelphia, in their official capacities and as representatives of the committee, the House of Representatives and Senate.

With a population of 86, based on 2020 U.S. Census information, Allport is an agriculture-dependent community that sits between England and Stuttgart. In 2019, a prosecutor determined that the city's Police Department violated Arkansas' speed trap law.

In September 2020, the audit committee started, for the first time under Act 712 of 2017, the process of trying to dissolve a municipality, abolish its offices, and return the territory and its residents to the county. The committee also authorized notifying the attorney general and governor of what it was doing.

Act 712 of 2017 was sponsored by now-Senate President Pro Tempore Jimmy Hickey, R-Texarkana. The law created a procedure for the revocation of a charter of a municipal corporation as a result of repeated noncompliance with state municipal accounting law.

That law requires the attorney general to file pleadings in the 6th Judicial Circuit Court, based on the committee's notification, to revoke the charter.

"We had a promise back in December that pleadings would be filed shortly," Arey told the audit committee's executive committee Thursday. "We've had discussions with some of the AG's staff during the session. We've had some vague promises of negotiations that were going on."

On June 4, the auditing committee voted to request that Rutledge attend its meeting today to explain why her office hadn't yet taken action aimed at dissolving Allport, he said.

Arey said the Arkansas Legislative Audit mailed a letter to Rutledge on July 28 requesting her presence -- the date that a related law, Act 938 of 2021 -- became effective.

"Unknown to us, a couple of things had happened, though, by the time we got to our August meeting," he said.

The attorney general's office and Allport filed a joint petition on June 12 in Pulaski County Circuit Court with a proposed settlement, and Wright on Aug. 12 signed an order adopting the settlement, Arey said.

"There was a lot about it that we didn't like. We were never told these things by the attorney general's office. As a matter of fact, we learned about them in a newspaper article that was published on Aug. 13 in the Democrat-Gazette," Arey said.

On Aug. 14, the audit committee's executive committee voted to authorize Legislative Auditor Roger Norman "to do what we needed to do to encourage the attorney general's compliance with the law," he said.

During a meeting with three of Rutledge's staff members on Aug. 19, Arey said "we expressed our discontent with their proposal." He said he informed the attorney general's office on Sept. 1 that Rutledge's presence at today's audit committee meeting would not be required.

Arey said he filed on Sept. 2 a motion in court seeking to intervene regarding Wright's order on behalf of Caldwell and Womack "to enforce the legislative prerogative that is involved here."

The court hasn't ruled on the motion, he said. The other parties will get to respond to the motion to intervene, and then he will get a chance to reply to their responses, he said.

"It may be a few days away from everything being in front of the court and the court making a decision," Arey said.

If the judge grants a motion to allow Caldwell and Womack to intervene in the case, Arey plans to file a motion to ask the judge to reconsider the Aug. 12 order, according to court records.

Rep. Johnny Rey, R-Trumann, on Thursday asked if Rutledge proposed the settlement to avoid a conflict with Allport because she is running for the Republican nomination for governor in 2022.

"The best I can do is they think that this law is unconstitutional," Arey said, referring to Act 712.

"They pointed to Amendment 80, and I am not sure exactly what their argument is."

Afterward, Rutledge spokeswoman Amanda Priest said in an email: "The priority has been and continues to be that the Attorney General ensures Allport is compliant with the law and as the chief legal officer of the state, she has solved the issue with Allport's compliance.

"The office was asked to enforce the law that passed in 2017 and used for the first time in this matter," Priest said. "Accusations that the office's actions stem from politics are far fetched and insulting by those grasping for relevancy."

Attorney Willard Proctor Jr. of Little Rock said in a letter dated Oct. 20, 2020, to the audit committee's then-co-chairmen, Sen. Jason Rapert, R-Conway, and Womack that he represents Allport, and Act 712 "impinges on the Executive Branch's authority by taking all discretion away from the Attorney General in proceeding forward with a revocation of a charter."

He noted that Republican Gov. Asa Hutchinson expressed concerns to the Arkansas Democrat-Gazette about Act 712, which became law without his signature.

In 2017, Hutchinson, who is an attorney, said: "The wording of the bill provides no discretion to the attorney general's office before filing a petition with the courts to revoke a charter of a municipal corporation.

"The discretion resides with legislative audit rather than the attorney general. This bill is not the correct balance," the governor said.

Under the order signed by Wright on Aug. 12, the court found that Allport is afforded an opportunity to comply with all outstanding and deficient Arkansas municipal accounting laws for 2019 and 2020 within 180 days of June 17, which is Dec. 14.

After reviewing the special master's findings, Wright will determine Allport's compliance with the law and decide if the charter should be revoked.

According to Caldwell and Womack's motion to intervene, the General Assembly established a process in Arkansas Code Annotated 14-62-102 to revoke municipal charters, delegating the authority to determine certain facts to the Legislative Joint Auditing Committee and requiring the attorney general to file revocation pleadings upon notification of those facts.

"Can an executive branch official -- the Attorney General -- and the Town of Allport ignore that process and proposed remedies not authorized in Arkansas Code Ann. 14-62-102?"

"And it does not authorize a court to make a factual determination, that the General Assembly already delegated to a legislative branch entity, [the Legislative Joint Auditing Committee] -- that is, the factual determination that a municipality has repeatedly failed to comply with the Municipal Accounting Law as overseen and enforced in Arkansas Code Ann. 14-59-117."