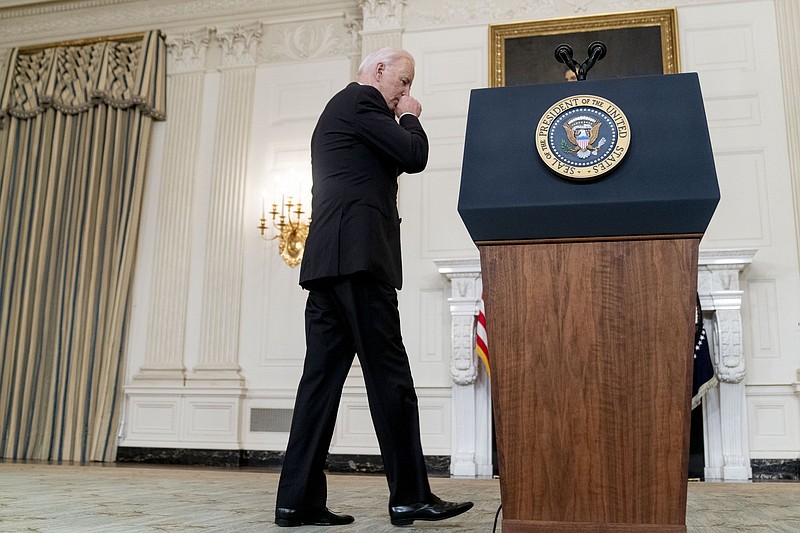 President Joe Biden arrives Thursday to speak in the State Dining Room at the White House in Washington. Video at arkansasonline.com/911bidenxi/. (AP/Andrew Harnik)

WASHINGTON -- President Joe Biden spoke with China's Xi Jinping on Thursday amid growing frustration on the American side that high-level engagement between the two leaders' top advisers has been largely unfruitful in the early going of the Biden presidency.

Biden initiated the call with Xi, the second between the two leaders since Biden took office. It comes at a moment when there is no shortage of thorny issues between the two nations, including cybersecurity breaches originating from China, Beijing's handling of the coronavirus pandemic and what the White House has labeled as "coercive and unfair" trade practices.

But Biden's aim with the 90-minute call was less focused on any of those hot-button issues and instead centered on discussing the way ahead for the U.S.-China relationship.

The White House is hopeful the two sides can work together on issues of mutual concern --including climate change and preventing a nuclear crisis on the Korean Peninsula -- despite growing differences.

Beijing, however, has pushed back against U.S. pressure and increasingly has suggested it could remain broadly uncooperative until Biden dials down criticism on what it deems internal matters.

[Video not showing up above? Click here to watch » arkansasonline.com/911bidenxi/]

"This is not in the basic interests of the two peoples," the Chinese leader said, according to Xinhua.

"Chinese-U.S. confrontation will bring disaster to both countries and the world," Xi added.

The call came less than two weeks after the United States completed its withdrawal from Afghanistan, where China has been interested in mining for commodities.

It also took place weeks after experts gathered by the director of national intelligence reported they were unable to conclude whether the coronavirus had escaped from a laboratory or arisen from a mutation of the virus in the animal population. The inconclusive nature of the review is bound to sustain competing theories over how the coronavirus emerged -- and the degree to which Beijing, which has blocked access to key researchers, bears responsibility.

Ahead of the call, a senior administration official said the White House has been unsatisfied with early engagements with the Chinese. The official, who was not authorized to comment publicly and spoke on condition of anonymity, said White House officials were hopeful that Xi hearing directly from Biden could prove beneficial.

The official said Biden made clear to Xi that he had no intention of moving away from the administration's policy of pressing China on human rights, trade and other areas where it believes China is acting outside international norms.

Biden highlighted the importance of the two leaders' ability to have private conversations and be clear about their priorities, the administration official said.

Biden from the start of his presidency has sought to put greater focus on China, rallying allies to speak in a more unified voice about Beijing's human-rights record, its trade practices and its military's increasingly assertive behavior that has unnerved U.S. allies in the Pacific. He sees Beijing as the most significant economic competitor to the United States and a growing national security concern.

But the president has also expressed hope that his long-running working relationship with Xi, one that dates back to when he served as Barack Obama's vice president, could pay dividends in cooperation on certain critical issues. The two spent time reminiscing about their time traveling together when they were both vice presidents, the administration official said.

The White House said the leaders agreed to engage "openly and straightforwardly" on issues where the nations are at odds and where there is agreement.

"Without political will at the very top of both governments, any stabilization of the relationship, any progress toward work of mutual concern like climate or the pandemic, is impossible," said Myron Brilliant, executive vice president and head of international affairs at the U.S. Chamber of Commerce. "It starts with the two leaders agreeing to a framework for working together on areas of shared concern."

Brilliant said the next phase of dialogue between the two leaders would need "to be backed by more concrete steps toward engagement in areas where the two sides also have differences and challenges," such as trade and technology.

Information for this article was contributed by Aamer Madhani and Joe McDonald of The Associated Press; and by Zolan Kanno-Youngs and David E. Sanger of The New York Times.