4 Afghan arrivals found to be infected by Compiled Democrat-Gazette Staff From Wire Reports | September 11, 2021 at 4:42 a.m. 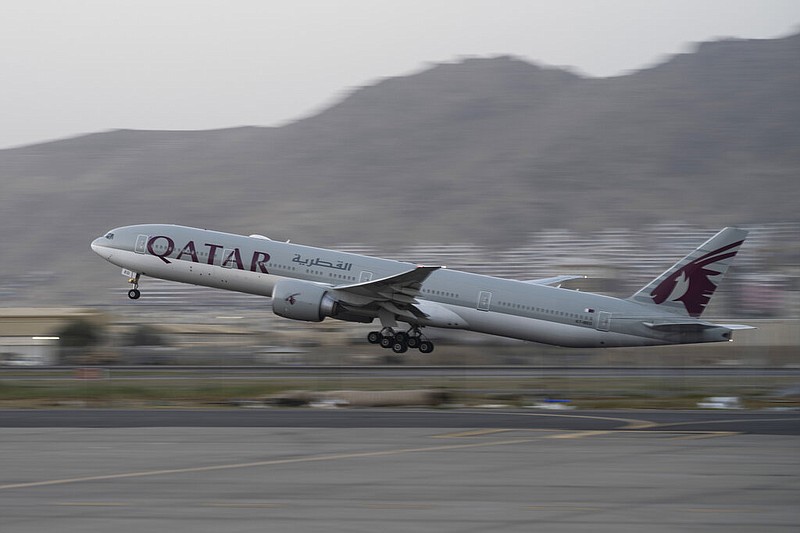 A Qatar Airways aircraft takes off with foreigners from the airport in Kabul, Afghanistan, in this Sept. 9, 2021, file photo. (AP/Bernat Armangue)

The U.S. on Friday halted U.S.-bound flights of Afghan evacuees, pulling some people off planes, after discovering a few cases of measles among new arrivals in the United States.

A U.S. government document viewed by The Associated Press warned the development would have a severe impact on an evacuation that since Aug. 15 has moved many thousands of people out of Taliban-held Afghanistan.

The decision was made by U.S. Customs and Border Protection on the recommendation of the Centers for Disease Control and Prevention. White House press secretary Jen Psaki said the halt stemmed from the discovery of measles among four Afghans who had arrived in the United States. It was not immediately clear whether the stop applied to flights from all transit sites overseas or only two of the biggest ones, in Qatar and Germany.

Customs and Border Protection spokespeople did not immediately respond to questions, including how long the halt would last.

Vaccination campaigns prevent major measles outbreaks in the U.S., but it can be a deadly disease for people in countries where violence or other obstacles block immunization. Hundreds of Afghan children have died of measles in recent years.

Psaki said the U.S. was requiring measles vaccinations for entry and that Afghans were receiving other immunizations at U.S. military bases before heading to new homes around the country. Officials were exploring vaccinating people while still overseas, she said.

The development had American officials overseas removing from planes Afghan families who already had struggled through a grueling, dangerous escape to safety after Kabul fell to the Taliban. Afghans faced Taliban checkpoints and crushing crowds to enter the Kabul airport. A suicide attack at an airport gate killed 169 Afghans and 13 U.S. military members.

The government document viewed by the AP noted the halt would "severely impact" operations at the U.S. Ramstein Air Base in Germany, one of the biggest transit sites. It also said U.S.-bound flights would stop from the U.S. al-Udeid base in Qatar.

Many thousands of Afghan evacuees airlifted out of Kabul are still en route to new homes in the United States. Some face further screening in Kosovo.

The government document stated that the flight halt announced Friday would have an "adverse effect" on the nearly 10,000 evacuees at Ramstein. It said many have been there more than 10 days and are increasingly fatigued.

Germany had set a 10-day limit for Afghans to stay at the base, but that has seemed more a guideline than a deadline. Some German politicians and media grumbled when some Afghans asked for asylum after reaching Germany.

Germany and Qatar, along with Italy, Spain, Kosovo, Kuwait and other countries, agreed to temporarily host U.S. processing sites for evacuees after Kabul fell, after allies initially balked over worries of getting stuck with U.S. security problems. Refugee groups have criticized the Biden administration for not bringing the Afghan evacuees to U.S. territory for screening.

Processing at many of the transit sites appears to be taking place largely in a peaceful and orderly fashion.

It was not clear if the halt would affect evacuation flights from Kabul itself. Friday was only the second day that the Taliban have allowed evacuation flights to leave the country after the frantic U.S. military-led airlift ended with the U.S. withdrawal from Afghanistan on Aug. 30.

Meanwhile, the Department of Homeland Security flagged 44 Afghan evacuees as potential national security risks in the past two weeks as the government screened tens of thousands for resettlement in the United States, according to vetting records reviewed by The Washington Post.

Of the more than 60,000 evacuees who have arrived on U.S. soil since Aug. 17, the lists show 13 Afghans remain in U.S. Customs and Border Protection custody awaiting additional screening and review procedures, including interviews with FBI and counterterrorism teams.

Another 15 who were considered security concerns have been turned over to U.S. Immigration and Customs Enforcement, sent back to transit sites in Europe or the Middle East, or in some cases approved for release after additional review. There are 16 Afghans on the Homeland Security lists who have not been cleared to travel and remain overseas at the transit sites.

The Biden administration said this week that it expects to resettle 95,000 Afghans in the United States, asking Congress for $6.4 billion in emergency funding to support the effort. Polls show broad support for resettlement, but GOP lawmakers and other critics have accused the administration of cutting corners with the vetting process.

Biden officials say the vetting is rigorous and multifaceted, and evacuees who aren't approved will not be released into the United States.

The Homeland Security lists show several Afghans were flagged for suspected association with terrorists, or whose phones and electronic devices contained information that raised concern among the Customs and Border Protection officers who screen them upon arrival. Customs and its National Targeting Center are checking Afghan passengers as they land at either Dulles International Airport in Virginia or Philadelphia International Airport.

Homeland Security Secretary Alejandro Mayorkas has declined to say how many Afghans have been blocked from traveling or failed to clear the vetting process, but he characterized the number as insignificant during a briefing with reporters Wednesday.

Instances in which evacuees have been flagged for additional checks or denied admission are "an example of a multilayered screening process working," he said. Homeland Security has deployed 400 officers, agents and other personnel to collect evacuees' biometric and biographical information and oversee the vetting process at the transit sites in Europe and the Middle East.

In some cases, additional information comes to the attention of customs officers and other officials while the person is in transit or upon inspection in the United States, Mayorkas said. That often occurs when customs asks arriving passengers to hand over their unlocked phones. Concerns raised during that process lead to additional reviews but don't automatically disqualify someone, he said.

FLIGHT OUT OF KABUL

Although evacuation flights have resumed for Westerners, thousands of at-risk Afghans who helped the United States are still stranded in their homeland with the U.S. Embassy shuttered, all American diplomats and troops gone and the Taliban now in charge.

With the United States and Taliban both insisting on travel documents that may no longer be possible to get, the plight of those people is testing President Joe Biden's promise not to leave allies behind.

An evacuation flight out of Kabul on Thursday, run by the Gulf state of Qatar and the first of its kind since U.S.-led military evacuations ended Aug. 30, focused on U.S. passport and green-card holders and other foreigners.

For the U.S. lawmakers, veterans groups and other Americans who've been scrambling to get former U.S. military interpreters and other at-risk Afghans on charter flights out, the relaunch of evacuation flights did little to soothe fears that the U.S. might abandon countless allies.

A particular worry are those whose U.S. special immigrant visas -- meant for Afghans who helped Americans during the 20-year war -- were still in the works when the Taliban took Kabul.

"For all intents and purposes, these people's chances of escaping the Taliban ended the day we left them behind," said Afghanistan war veteran Matt Zeller, founder of No One Left Behind. It's among dozens of grassroots U.S. groups working to get out Afghan translators and others who supported Americans.

An estimated 200 foreigners, including Americans, left Afghanistan on the commercial flight out of Kabul on Thursday with the cooperation of the Taliban. Ten U.S. citizens and 11 green-card holders made the flight, State Department spokesman Ned Price said. Americans organizing charter evacuation flights said they knew of more U.S. passport and green-card holders in the northern city of Mazar-e-Sharif and elsewhere awaiting flights out.

National Security Council spokesperson Emily Horne said Thursday's flight was the result of "careful and hard diplomacy and engagement" and said the Taliban "have shown flexibility, and they have been businesslike and professional in our dealings with them in this effort."

But many doubt the Taliban will be as accommodating for Afghans who supported the U.S. In Mazar-e-Sharif, a more-than-weeklong standoff over charter planes at the airport there has left hundreds of people -- mostly Afghans, but some with American passports and green cards -- stranded, waiting for Taliban permission to leave.

Taliban fighters have imposed a withering siege in Afghanistan's rebellious Panjshir province, denying food to residents and carrying out some extrajudicial executions of civilians, a tribal elder who recently fled the province said Friday, adding to a growing list of alleged abuses.

A Taliban spokesman denied that the movement's fighters had killed any civilians in Panjshir, a northern region that has been a last redoubt for anti-Taliban fighters. The latest accusations came as U.N. officials decried other alleged abuses, including reprisal killings and beatings and fatal shootings of protesters across the country.

Taken together, the accusations have painted a bleak picture of Taliban rule in the weeks since the Islamist militants took power and pledged to govern inclusively, respect women's rights and press freedoms, and avoid retaliatory actions against former adversaries.

An interim government named by the Taliban this week consists entirely of Taliban members, excludes women and eliminates the ministry in charge of ensuring opportunity and rights for women and girls. A Taliban spokesman, defending the appointments, said they were the result of discussions held "all over the country."

The militants seized control of Panjshir last week. As sporadic clashes have continued, civilians have seized chances to flee the province amid reports that at least eight residents, including children, had been killed by the Taliban, said the elder, who spoke on condition of anonymity because he feared for his safety.

He said he fled with his clothes, leaving behind his cows, goats and chickens. "My people pressed me to leave the area," he said, adding that his family warned him Taliban fighters would kill him. The eight civilians killed in Panjshir three days earlier were "neither supporters of the resistance or the Taliban," he said, without providing more detail.

In a Skype interview from London, Ahmad Wali Massoud, the uncle of Ahmad Massoud, the leader of resistance fighters in Panjshir, echoed the accusations that the Taliban were imposing clampdowns in the province and had killed civilians, though he was not able to say how many or under what circumstances. A former Afghan ambassador, he said resistance fighters still controlled major areas in Panjshir and were engaged in intermittent clashes.

"Everyone is weighing their next move," Massoud said, adding that there was little prospect that negotiations would end the standoff.

"The Taliban is the Taliban," he said. "They are worse and more violent than ever before."

Information for this article was contributed by Ellen Knickmeyer, Frank Jordans, Julie Watson, Bernard Condon and Padmananda Rama of The Associated Press; and by Nick Miroff, Haq Nawaz Khan, Kareem Fahim and John Hudson of The Washington Post. 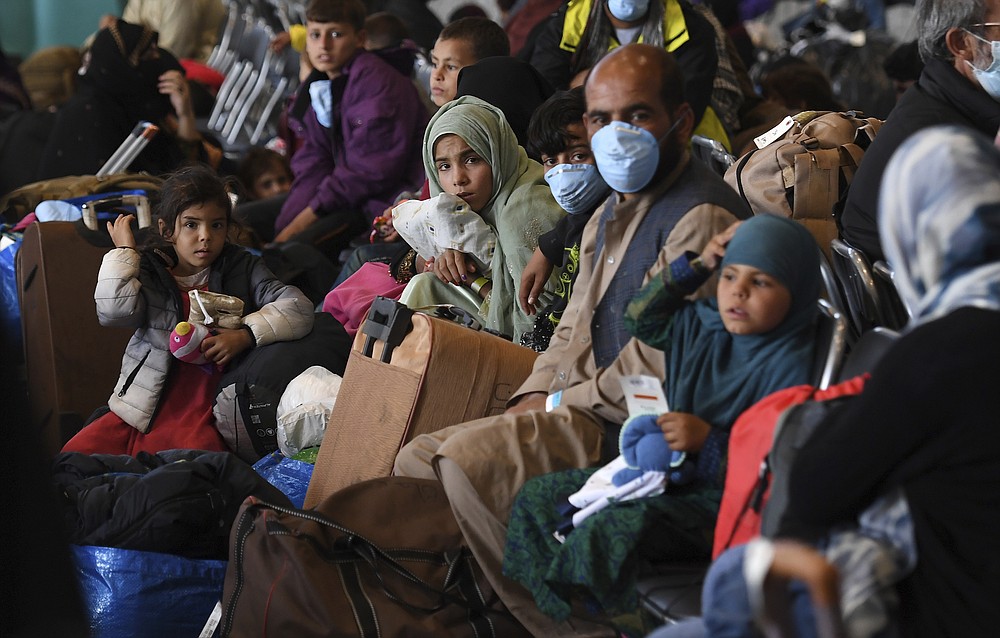 Afghan refugees are processed inside Hangar 5 at the&#xa0;Ramstein U.S. Air Base in Germany Wednesday, Sept. 8, 2021. U.S. Secretary of State Antony Blinken arrived at the base where he will meet with his German counterpart for talks on Afghanistan. (Olivier Douliery/Pool Photo via AP) 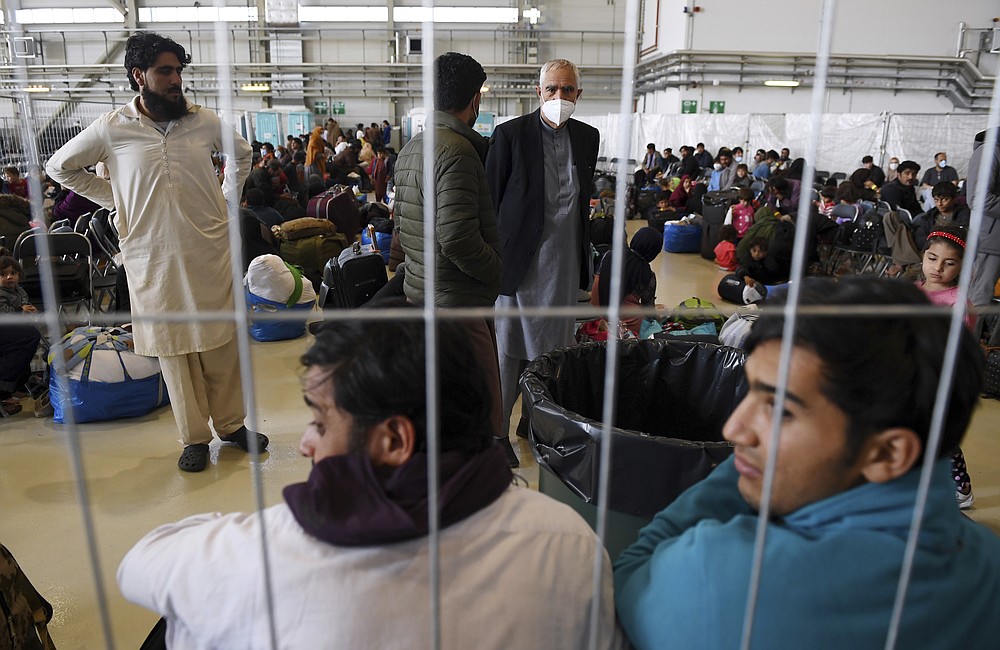 Afghan refugees are processed inside Hangar 5 at the Ramstein U.S. Air Base in Germany Wednesday, Sept. 8, 2021. U.S. Secretary of State Antony Blinken arrived at the base where he will meet with his German counterpart for talks on Afghanistan. (Olivier Douliery/Pool Photo via AP)