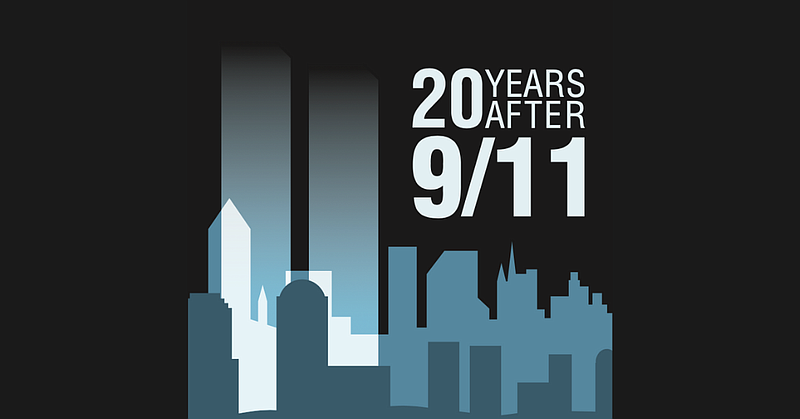 To commemorate the 20th anniversary of 9/11, we asked our readers to share their memories of the terrorist attacks that destroyed New York City's World Trade Center, damaged the Pentagon and brought down an airliner near Shanksville, Pennsylvania.

Below are some of the thoughts readers shared with us. Responses have been edited for grammar, length and clarity.

To say I remember the day would not quite explain it. It’s more that I remember the next day and the days following. The day of 9/11 is a little foggy – dreamlike. I am a first grade teacher. It was a normal, sunny morning. Going through the daily routine. Then there was a knock on my door. One of my co-teachers had me step out into the hall. She told me that the United States was under attack. She started giving me details and then I walked back in my classroom. Thinking of these sweet and innocent 6- and 7-year-old students. And how their world was about to change. I didn’t want to steal that away from them. My teacher friends and I decided that it was not up to us to break the news to them. We would not turn on any televisions. During our lunch or afternoon activities we would sneak to the teachers’ lounge to watch and catch up. We hugged each other and cried. Then gathered ourselves back up and would go back to teaching. At the end of the day, we loaded our kids into their cars as their parents searched our faces. They had all been watching the news all day long. We reassured them (the parents) it was going to be OK. The next morning everyone was exhausted. Drained. We had decided to put some blank paper on their tables and let them have a little free draw time that morning. About halfway into their drawings I called our counselor in. We walked around. Every child had drawn tall skyscraper buildings. Exploding and on fire. Planes running into them. And people jumping from the buildings. Yes, people flying out of the building to their deaths. I realized that everyone of these kids had gone home and sat with their parents in front of the TV to watch all of the coverage. They didn’t understand what was going on or why but they knew it was important. With the counselor in my room, we talked and cried. I remember holding on to these pictures for a long time. Just in disbelief of what they had seen and how they were interpreting all of this.

Eight months pregnant, I was on the river bridge driving to work. Scott and Jeff with B98 announced a small plane, maybe a crop duster had flown into the tower. By the time I got to work (next to the federal building) the reality was all over the news. I watched live as the second plane hit. I desperately wanted to think it was a re-play. Katie Couric was reporting from the rooftop and as it hit in the background there was a stunned silence. No one could comprehend this. My daughter was born 11 days after the attacks. Before every birthday becomes a sweeping recap of the horror of that day. I think about the babies born on that day, what their “celebrations” are like. Twenty years later and I still see bodies leaping from the tower; asbestos coating the faces of New Yorkers; disbelief, despair, grief and shock. Twenty years later and it stops time every 9/11, and no doubt it will continue 30, 40 and even 50+ years from now.

I was a senior at Little Rock Central High School. I was headed to school a little late. Per my usual routine I was listening to the morning show on Alice. They started talking about a plane hitting a building. It sounded so absurd I thought it was a prank. I parked and went inside. My first class that day I was a teacher's aide. When I got to the class she rushed me inside. Everyone’s eyes were glued to the TV and almost immediately the first building fell. I couldn’t believe what we were watching. A teacher across the hall’s husband was in New York City at the time. My older sister was in college in Boston. The panic of trying to reach a loved one was so overwhelming. They didn’t switch classes all day. We were told to go straight home and all after school activities were canceled. In the aftermath I visited NYC with a donation from Central students. NYC was so different from the times I’d visited before. It was somber and a sense of calmness you wouldn’t expect. It was a very moving and emotional trip.

I was on a Delta flight to Washington, D.C. We were eventually told what was happening and directed to land at Hartsfield airport in Atlanta. The calm at the airport was uncanny. Everyone exited in shock and silence. No baggage claim, just leave the airport. I was fortunate to get to a Hampton Inn and got a room. Once I checked in with family and my company I went downstairs to find the lobby very crowded. Hampton staff was making every effort to accommodate the stranded. They brought out pillows, blankets and had snacks and water for everyone. I eventually gave up my room to an elderly couple. Two days later an aunt and uncle in Marietta were able to get to me.

On the morning of 9/11, I was at work tying up loose ends preparing to attend a processing manger's meeting. The meeting was cancelled. I was in the Air National Guard, so I checked with the full-time people at the base to see what was happening out there. The next weekend at our monthly drill, our Security Forces Squadron worked with the active duty unit to help them get into a new schedule with all the increased security. One month later, our entire Security Forces Squadron was activated for two years in support of Operation Enduring Freedom and Operation Iraqi Freedom.

I was a fifth grade student at DeSoto Central Elementary in Southaven, Miss. I remember my English teacher speaking with two other teachers in the hallway about what had happened. She spoke with us as a class and informed us of what happened that morning. As a 10-year-old, I did not have a major understanding of the effect this would have on the entire country and world. After school, I remember waiting at the gas station in line for quite a while. My mom was talking to my brother and me about what happened in New York City, Washington, and the plane that went down in Pennsylvania. Now, as a high school principal, when Sept. 11 comes around, I reflect about my experiences that day and explain to students the importance of remembering those that lost their lives on Sept. 11, 2001.

I was working in the ICU in Fayetteville when I saw news footage of the first plane hitting the World Trade Center on the TV in my patient’s room. I thought, “Wow, what a freak accident!” Then the second plane hit, and I knew it couldn’t have been an accident. I spent the day trying to focus on my critically ill patients, while wondering what this meant for the USA. Then over the next few days it was eerie because there were no airplanes in the sky. It was quiet, as if the earth was just waiting for the next pin to fall.

I was at work in west Little Rock that day. I was supposed to go to a luncheon meeting at Jacques & Suzanne's restaurant on the top floor of what was then the First Commercial Building. I hesitated and then decided not to go, unsure of whether or not other highrise buildings might also be targeted. What surprised me most were the number of my coworkers who were so upset that they were leaving the office and going home.

I had just come home from working a night shift as a NICU nurse. I turned on the ‘Today’ show as I ate breakfast. They first reported that a plane had struck one of the World Trade Center buildings. At first everyone just thought it was a fluke accident. Then when the second plane hit, the reporters obviously thought this was no accident. I called my husband, who was my fiancé at the time, and he said they were watching it at work too. I didn’t sleep much that day as I laid on the couch and watched the reports and devastation as the events unfolded. I remember churches having services that night and the president speaking. It was like the whole country was united on that day and for weeks after as I had never experienced. It was like the world stopped and we all acknowledged our connection to each other through this tragedy. I can’t believe it has been 20 years. I wish our country felt that kind of connection again. That was a positive that came out of such a negative event.