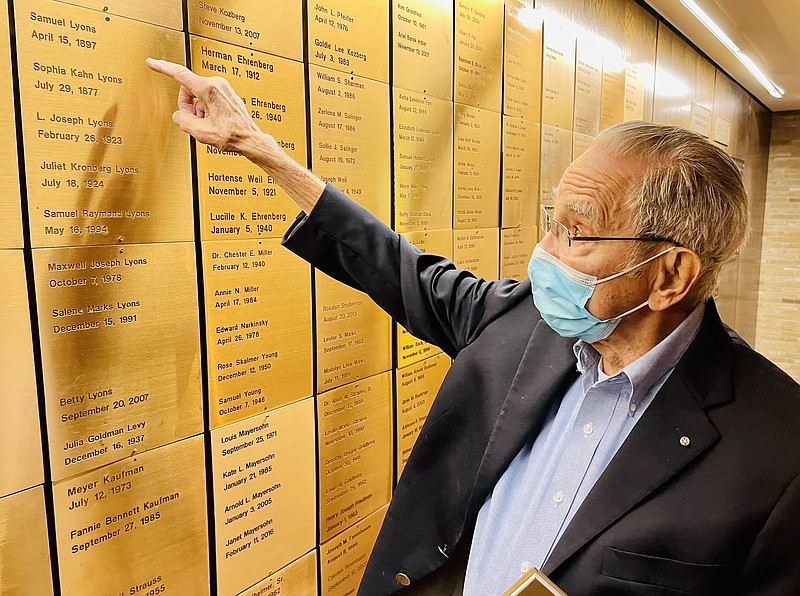 Maxwell “Mac” Lyons of Little Rock points out the name of his great grandfather on Temple B’nai Israel’s Wall of Remembrance prior to the Rosh Hashanah Eve service on Monday. “I look at this wall every time I come out here,” he said after recounting a little of Samuel Lyons’ story. (Arkansas Democrat-Gazette/Frank E Lockwood)

As dusk transitioned to darkness Monday, mask-clad, fully-vaccinated congregants greeted one another warmly while carrying copies of the Machzor, a prayer book containing the order of service.

"L'Shanah Tova," Rabbi Barry Block called out to those he passed.

"Most people would translate [or] would say, colloquially, 'Happy New Year,'" he told a visitor. "But it really means 'To a good year.'"

According to Jewish tradition, it has been 5,782 years since the creation of Adam and Eve.

In 2020, when the city's Reform Jewish congregation welcomed New Year 5781, it was an entirely virtual experience.

Thanks to Pfizer, Moderna and Johnson & Johnson, congregants this time were able to greet this new year either remotely or communally.

"It's just so wonderful to be here with you in our synagogue home to welcome the new year together," Block told the worshippers in the pews before also acknowledging his electronic audience.

Everyone in the room had received their shots and provided proof of vaccination status.

Musicians, allowed to go unmasked as they sang, had tested negative for covid-19 upon arrival at the temple, Block noted.

Children 11 and younger, ineligible for the vaccine, were also ineligible for in-person attendance; a service for them was livestreamed Tuesday morning.

In Leviticus 23, the children of Israel are instructed to hold "a holy convocation" on the first day of the month now known in Hebrew as "Tishrei."

The sacred gathering, they were told, must be "proclaimed with the blast of horns."

During Monday's service at B'nai Israel, Merrick Fagan of Little Rock ensured that the biblical dictate was followed, repeatedly blowing his shofar, or ram's horn.

The trumpet will sound again Thursday, when the congregation gathers for Yom Kippur or the Day of Atonement, the holiest day in the Jewish calendar.

Before entering the sanctuary, a few worshippers paused at the synagogue's Wall of Remembrance to gaze on the names of departed loved ones.

"It's not chronological and it's not alphabetical so it's very random," explained Nan Selz, as she searched for the name of her parents and an aunt.

"My whole family's here, beginning with this one," said Maxwell "Mac" Lyons, pointing to the name of his great-grandfather, Samuel Lyons, dead since 1897.

After noting the presence of his grandfather, father and mother on the list, Lyons said, "I look at this wall every time I come out here [to] make sure they're still there."

It asked God to "recall the loving deeds of our fathers and mothers, and bring redemption to their children's children, acting in love for the sake of Your name."

After the service, several members lingered, eager to visit with old friends and family.

"My family's been a member of this congregation for over 100 years," said Glenn Block. 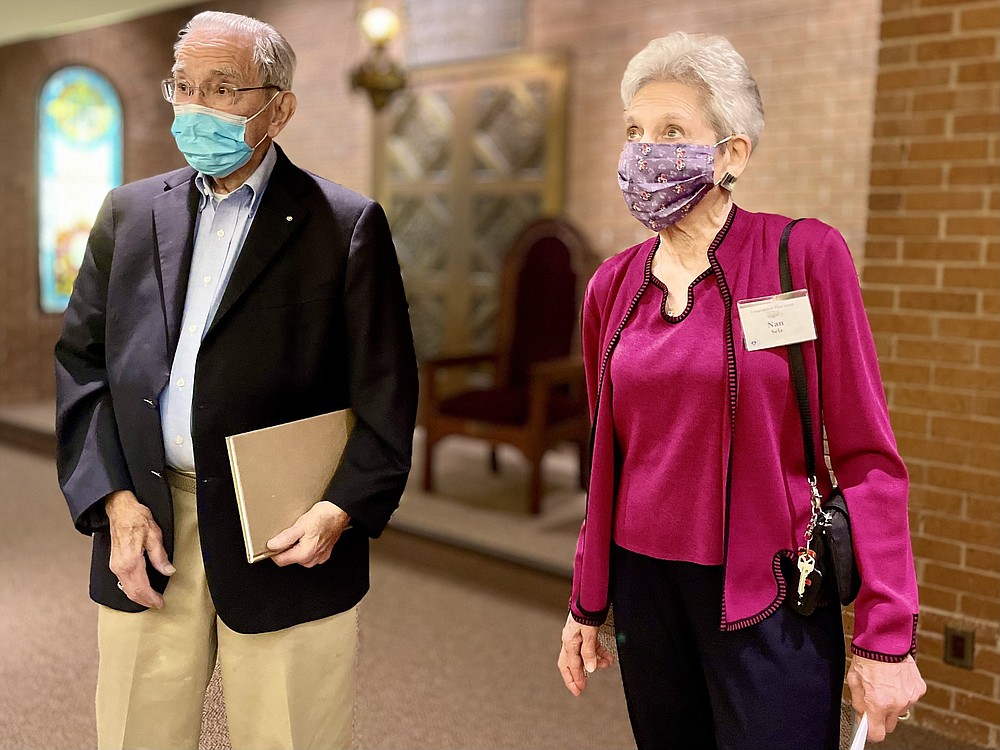 In Little Rock, Maxwell “Mac” Lyons and Nan Selz paused at Temple B’nai Israel’s Wall of Remembrance on Monday, looking for the names of departed loved ones. Both families have longtime ties to the congregation. (Arkansas Democrat-Gazette/Frank E Lockwood)