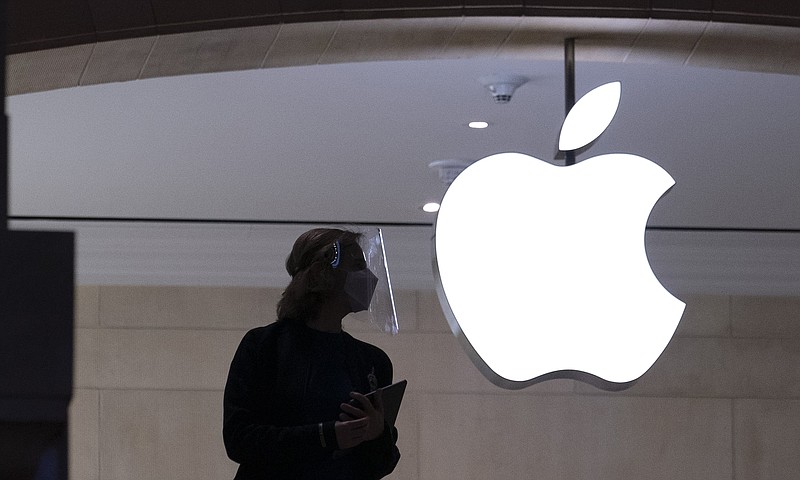 An Apple store employee is shown in New York in this February file photo. (AP/Mark Lennihan)

A federal judge Friday said Apple could no longer force developers to use its payment system in their apps, a ruling that will allow companies to avoid Apple's commission of up to 30% on some app sales.

The decision could upend the economics of a $100 billion online market and is a major setback for Apple, which counts on revenue from its app store to fuel its expansive profits. It is the latest but potentially most damaging loss for the company, which is facing increasingly pointed questions from regulators and politicians around the world about its business.

The order came as part of the ruling in a prominent legal case between Apple and Epic Games, the maker of the popular game Fortnite that sued Apple last year over its app store policies.

In the ruling, Judge Yvonne Gonzalez Rogers of U.S. District Court for the Northern District of California said Apple violated California's laws against unfair competition by banning app developers from directing customers to other ways to pay for their services. She ordered that Apple must start letting developers include links in their apps to other payment methods within 90 days. Apple could seek to block the order before then.

But Gonzalez Rogers ruled in favor of Apple on other counts, including that Apple did not have a monopoly in the market of mobile games.

Gonzalez Rogers said she sided with neither company and that the market in question was digital mobile gaming transactions. In that market, she said, Apple does not have a monopoly.

"While the court finds that Apple enjoys considerable market share of over 55% and extraordinarily high profit margins, these factors alone do not show antitrust conduct," she said. "Success is not illegal."

She also said that Epic breached its contract with Apple when it allowed Fortnite users to pay it directly, instead of via Apple, inside of its iPhone app last year.

The ruling means that when customers sign up for a subscription or buy a digital service or item in an iPhone app, companies can now steer those customers to outside websites to complete the transaction. That would allow those companies to avoid Apple's commission on the sale.

The decision could have a major ripple effect across the digital economy. If Epic prevails after expected appeals, the change would probably be a boon to the bottom lines of businesses that say they are forced to share too much of their sales with Apple.

Epic has sued Google for the same issues with app commissions on its Android operating system, and that case is expected to go to trial this year. Last month, 36 states and the District of Columbia also sued Google for forcing companies to use its payment system in exchange for access to its app store. Google's public response said, in effect, that the states should instead be focused on Apple.

Apple is widely expected to ask a judge to keep the order from going into effect. Either company could also appeal to the U.S. Court of Appeals for the 9th Circuit. In that court, a three-judge panel could review the decision, a process that could take a year or more. After a ruling there, Apple or Epic could appeal to the Supreme Court.

A WIN FOR EACH SIDE

The ruling allows both sides to claim a partial victory. Apple now has a court ruling that says it does not run a monopoly in an important digital marketplace, which undercuts its opponents' efforts to claim that it violates antitrust laws. But Epic's lawsuit could also force Apple to crack open its airtight iPhone software to create an avenue for developers to avoid its commission.

"Today the court has affirmed what we've known all along: the app store is not in violation of antitrust law," Apple said in a statement. "As the court recognized 'success is not illegal.' Apple faces rigorous competition in every segment in which we do business, and we believe customers and developers choose us because our products and services are the best in the world."

Tim Sweeney, Epic's chief executive officer, said on Twitter that he was not satisfied with the ruling because it did not go far enough in allowing companies to complete in-app transactions with their own payment systems, versus having to direct customers to outside websites. He said Fortnite would not return to the app store until such rules were in place.

"Today's ruling isn't a win for developers or for consumers," he said. "We will fight on."

The app store generates nearly $20 billion a year for Apple, according to some estimates. The business has become such a cash cow because Apple has effectively forced companies to use its payment systems in exchange for access to the app store, which is the only way to get an app on iPhones. That arrangement has allowed Apple to charge a commission on many transactions.

The ruling Friday is the latest development that cuts into that business model. Last month, South Korea passed a law that required app stores to allow customers to pay through multiple payment systems. Apple also a settled another lawsuit over its commission with a group of smaller developers. In that settlement, Apple paid $100 million and agreed to allow developers to tell customers in an email about other ways to pay for their services, outside of Apple's payment systems.

And last week, prompted by an investigation by the Japan Fair Trade Commission, Apple said it would allow a subset of apps known as reader apps, like Netflix and Spotify, to include a link within their apps directing users to external payment methods.

But the order Friday goes much further, because such reader apps account for very little of Apple's app store revenue, analysts have said. The order applies to all apps, and Gonzalez Rodgers said that gaming apps accounted for 70% of the sales on iPhone apps.