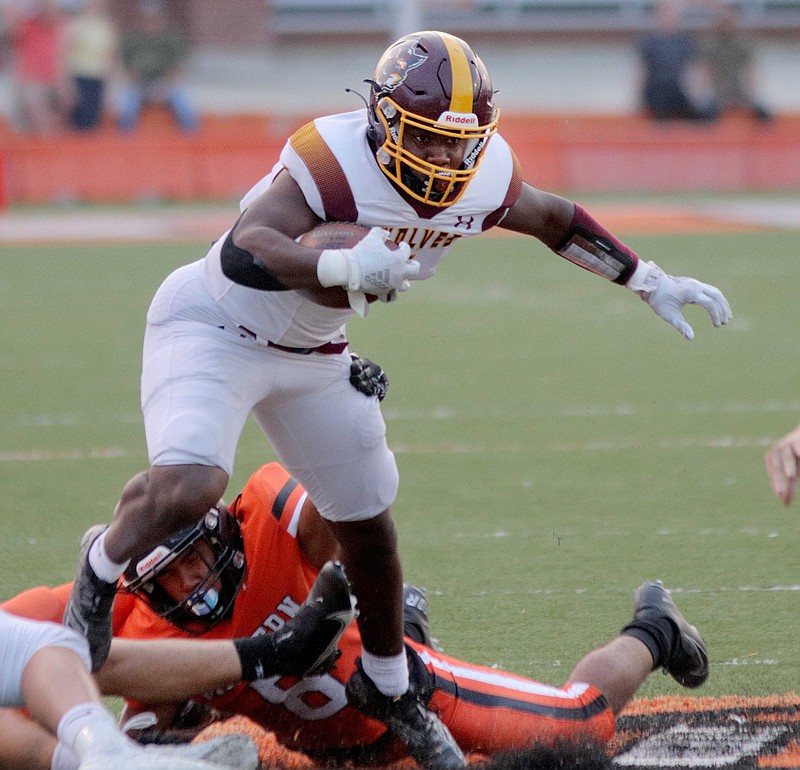 Lake Hamilton running back Kendrick Martin leaps over Malvern defenders during Friday night’s game at Claude Mann Stadium in Malvern. More photos are available at arkansasonline.com/911malvern/ (Special to the Democrat-Gazette/Stephen B. Thornton)

MALVERN -- Lake Hamilton Coach Tommy Gilleran wanted to see a little more fight out of his team in the second half of Friday night's game at Malvern.

Fortunately for him, the Wolves threw enough blows during the first two quarters of play to still walk off David Alpe Field with a victory.

Lake Hamilton used its potent three-tiered rushing attack to build a huge lead before coasting past the Leopards 35-12 at Claude Mann Stadium.

The Wolves rushed for more than 260 yards, the majority of which came in the first half when they built a commanding five-touchdown cushion that way too much for Malvern to overcome.

Tevin Hughes carried 11 times for 128 yards and 2 touchdowns for Lake Hamilton (2-0), which hadn't played since beating Hot Springs Lakeside to open the season but showed no signs of rust after jumping on Malvern quickly. Owen Miller ran 5 times for 80 yards and a touchdown before leaving the game in the second quarter with a leg injury. Kendrick Martin added 65 yards on six carries with a touchdown as well.

"We've got three really good running backs," Gilleran said. "They do such a good job of running the ball and breaking tackles. ... they break tackles all the time. That's what people don't think about.

'They don't get tackled by the first guy. It's always somebody else that has to tackle them. And then, we've probably got one of the best offensive lines in the state. They come off and mash people."

Lake Hamilton mashed Malvern often during the first 24 minutes of play by scoring on five of its six first-half possessions. The only series the Wolves didn't cash in on was the final one of the second quarter when quarterback Grant Bearden took a knee just seconds before the halftime buzzer.

But Lake Hamilton was in total control long before that horn ever sounded.

The Wolves ran only 22 plays in the first half, yet eight of those covered 15 yards or more. Martin's 15-yard score and Miller's 3-yard touchdown in the first period gave Lake Hamilton a 14-0 lead. Bearden then hit Gavin Robbins for a 25-yard scoring pass on their first drive of the second quarter to up their lead to 21.

The Leopards, on the other hand, didn't fare nearly as well.

Malvern (1-1) came up empty-handed on three fourth-down attempts in the opening half and had issues wrapping up the Wolves' trio of tailbacks. And when Malvern did catch a break, it was taken away.

The Leopards recovered a fumbled punt by Lake Hamilton midway through the second quarter – a play that would've set them up inside the Wolves' 35. But a personal foul call wiped the recovery out and forced Malvern to punt again.

Four plays later, the Wolves were back in the end zone on a Hughes' 19-yard score.

"We've got so many sophomores," Malvern Coach J.D. Plumlee said. "You look out there on the very first possession defensively, we had nine sophomores on the field against a powerhouse like Lake Hamilton. We knew it was going to be a huge challenge.

"We want to go out there and see what our guys can do. They played extremely hard, though. We moved the ball decently inside the 20s, but we couldn't finish drives. And then when you have to punt back to Lake Hamilton, they're going to punish you."

The Wolves did suffer a blow when Miller went down after suffering a left leg injury one snap prior to Hughes' first touchdown. The senior had sprinted down field for a 30-yard gain before falling awkwardly after being tackled. Gilleran said afterward that Miller hyperextended his knee, but that'd he be fine.

The Wolves didn't miss a beat, however. They stopped Malvern on fourth down at its own 23 on the Leopards following series and later scored again on a Hughes' 17-yard run to open up a 35-point lead.

Malvern didn't quit and eventually got on the board in the third with its most impressive drive of the game. Cedric Simmons, who finished 13 of 25 for 171 yards passing, took the Leopards 80 yards in nine plays, with Jabri Artis hauling in a 34-yard strike for a touchdown with 6:01 left in the quarter. The Leopards would score again with 9:37 left in the game on Simmons' 34-yard touchdown toss to Braylon Watson, but that'd be it for rest of the contest.

"We played real well in the first half," Gilleran explained. "We got out there and knew what we needed to do. And then in the second half, it was kind of lackadaisical. We thought well the clock's gonna run, and our kids didn't take it serious enough like we wanted them to. And that happens to a lot of teams when you get up that much.

"But give it to Malvern. They came out, made some adjustments and did some things to hurt us. They made some plays. We've got to play a full game."