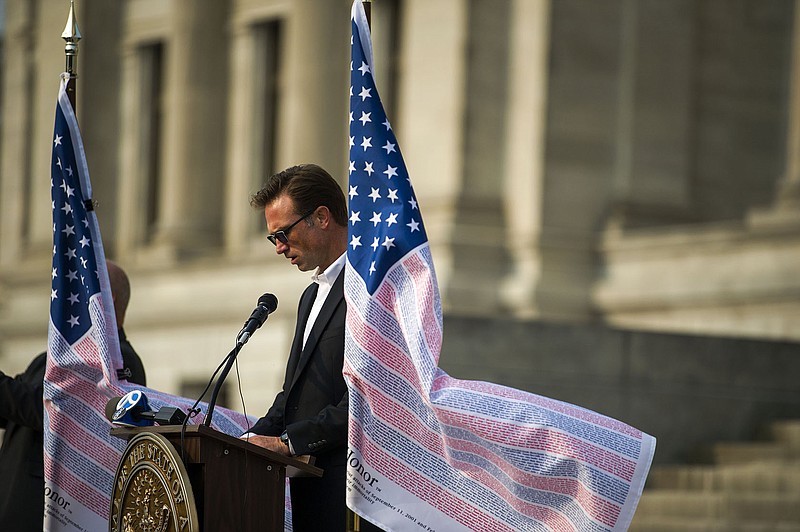 On the 20th anniversary of the worst mass terrorist attack in American history, Adam Staples chose not to recount the story of how he barely made it out of the World Trade Center South Tower in lower Manhattan minutes before it collapsed into a pile of burning rubble.

"I have told that story over and over again," said Staples, who was an intern for an investment-banking firm that had offices in the South Tower at the time of the Sept. 11, 2001, attacks. "I am just giving the facts. It is just a timeline."

The Arkansas native had been on the 61st floor of the South Tower when the second hijacked plane slammed into the floors above him. Minutes before, another plane crashed into the North Tower. He scrambled down the stairs after the second plane hit the building he was in, making it out about eight minutes before it fell.

He was 22 at the time. More than 800 people were killed in the South Tower.

Instead, Staples, who spoke at a ceremony Saturday morning on the steps of the state Capitol to mark the 20th anniversary of the attacks, chose to highlight the events of that day that he said embody humanity's "highest calling."

He spoke of the passengers on planes who tried to stop hijackers from hitting more targets after the World Trade Center and the Pentagon were struck. He spoke of the first responders who guided people out of the burning Twin Towers, staying inside to save lives until the buildings stood no more.

"There is something written in our DNA, and it is engraved on our souls, and we watched it in real time as humanity approached divinity [that day]," Staples said. "In that awe and that wonder we had was worship. Whether we acknowledge it or not, we worshipped our creator that day."

Staples continued, speaking in front of an audience that included Gov. Asa Hutchinson, current and former members of Congress, law enforcement officials, veterans, members of the armed forces and Arkansas families who lost loved ones in the attacks.

"To me, the most notable thing about Sept. 11 is not the memory of evil being carried out," said Staples, who now lives in Walnut Ridge with his family. "If we think about it long and hard, the image that comes to mind is not planes, and it is not the buildings, it's first responders."

"Some guy who left his kids at a day care that morning. Some lady who drove her kids to day care, then put on a police officer's uniform and was working around the World Trade Center that day," he said. "That is the image we have. The reason that image endures longer is because it approaches the highest calling of being willing to lay down one's life for one's friends."

American flags with stripes made up of the names of the thousands who died flanked those who spoke at the State of Arkansas 9/11 Ceremony.

Across the country, speakers at other ceremonies read 50 names of those who lost their lives during the attacks, ensuring that every person who died was remembered 20 years later.

The hourlong ceremony was timed to include moments of silence when the commercial jets hit each building.

8:46 a.m. when United Airlines Flight 11 crashed into the North Tower of the World Trade Center.

9:03 a.m. when United Airlines Flight 175 crashed into the South Tower.

"War is ugly," said retired U.S. Army Col. Mike Ross, the chairman of Veterans Villages of America. "There are a lot of people out here who want to destroy our way of life."

"It is not if they attack us again. It's when and where," he said. "That is why we have to be vigilant, and we can never forget what has happened in the past so we can prepare for the future."

"This day is a time for reflection and remembrance," Hutchinson said. "For each of us, we remember where we were, the circumstances, the uncertainty of the moment, and the anger we felt for the attack on the United States of America, and the senseless murder of over 3,000 Americans."

"It was an attack on freedom, democracy and civilization," said the governor, who was head of the Drug Enforcement Administration when the attacks occurred. "We also reflect on the heroism of that day -- the bravery of those trapped in the Twin Towers, the courage of the firefighters and first responders. All come to mind as we remember that day."

President George W. Bush appointed Hutchinson undersecretary of Homeland Security for Border and Transportation Security in 2003, a role in which the governor was responsible for protecting the country from another terrorist attack.

Hutchinson said that the recent American withdrawal from Afghanistan and the end of the war there that began in the aftermath of 9/11 as the U.S. sought to stem the threat of more extremist groups from emerging in the region means that the U.S. "is still under threat today."

Other observances of the 20th anniversary of the Sept. 11 attacks were held in Texarkana at the Arkansas Welcome Center, Texarkana College and Texarkana Regional Airport.

Also on Saturday, an exhibition with artifacts from the sites of the attacks opened in the Capitol rotunda. The exhibit includes declassified photographs and documents obtained from the crash scene at the Pentagon as well as items from New York City first responders and the Arlington, Va., Police Department, who were the first responders to the Pentagon.

CORRECTION: Those reading the names of victims who died were Engage AR AmeriCorps members. Speakers included Mike Ross, a U.S. Army Colonel (retired) and chairman of Veterans Villages of America. An earlier version of this story misidentified the people reading the names and incorrectly reported Ross's title.