An engagement that was 20 years in the making 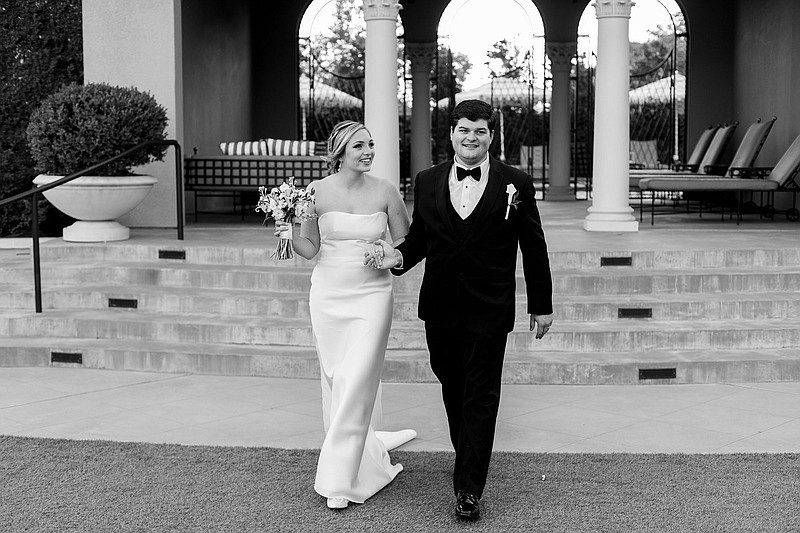 The story of Drew Ford and Ryan Herget goes so far back that neither of them remembers the moment he stuck out his hand and introduced himself.

"My mom probably tells this part better than we do because I don't think we remember it much," Drew says.

Ryan was the fourth-grade class president, he informed them on that first day, and he would be showing them around Little Rock's Cathedral School.

In 2001, their fifth-grade teacher encouraged Ryan to stick by Drew's side as she got acclimated to her surroundings. Drew didn't mind one bit being paired with this adorable boy.

Middle school saw them go through Little Rock Cotillion together, including the Holly Ball.

Ryan often rode his bike to her house, they shared hushed late-night phone conversations, and he once tried to slip a note into what he thought was her locker but was actually assigned to the girl whose last name started with a G and thus fell alphabetically between Ford and Herget.

They were 13 when they shared their first kiss on the darkened tennis courts at the Little Rock Country Club, during an after-chicken-tender-dinner stroll on a date chaperoned by Ryan's father.

"He would sneak over after Catholic High football games and we would watch the game in the back of his truck," Drew says. "That was all very real, but it was never serious. I think it was friends first, with a big crush."

After graduation, Drew left for the College of Charleston in Charleston, S.C., and Ryan went to the University of Mississippi at Oxford. Through their early 20s, they exchanged occasional emails and talked a few times a year.

"There would always be those moments where something would remind the other of the other one and we would end up calling each other and talking on the phone for hours," Ryan says.

Ryan was busy starting a company, Chef Shuttle, and Drew was focused on her career, which led to her living in seven states during her 20s.

"The emails were really sweet, like it would be him in New York and me living in L.A., and they're between these two 20-somethings that are just trying to figure it out," Drew says.

"We kept waiting for the stars to align and they just never aligned the way we needed them to," Ryan says. "I think as the years went by the attraction didn't wane but there was always kind of the excuse of 'one day it will happen.'"

During a phone conversation in the fall of 2019, Drew mentioned needing to pack for a flight from her home in Nashville, Tenn., to Dallas for work.

"He said, 'I'm living in Dallas. What time is your flight? I'll pick you up from the airport,'" Drew says.

They had dinner two nights in a row.

"That was probably the first time we had seen each other in five years," she says. "There was definitely a spark, but I think we were both still in the mindset of not being sure we were ready, so that kicked off more phone calls, more conversations."

While they were in Little Rock for their 10-year high school reunion that October, they shared "a moment."

"I flew back to Nashville and Ryan didn't call for a week, so I thought it was over," says Drew, who thought the moment deserved a conversation.

Conversely, Ryan was at peace, assuming their romance was finally underway and anticipating seeing her again a week later in Nashville.

"I assumed we had ended in a good place," says Drew, who was able to smooth things over during dinner.

They saw each other almost every weekend after that.

Drew was in Little Rock for a long weekend in March 2020 and the covid-19 pandemic led to her company shutting down.

"We ended up being in Little Rock full time," she says.

By April, Ryan had ordered an engagement ring that was delayed indefinitely and bought another one from a Little Rock jeweler. He lined up a band, balloons, champagne and a photographer to meet them at the Little Rock Country Club tennis courts, where they shared their first kiss more than a decade earlier, on April 4.

Rumors of a covid-19-related shutdown prompted him to move his plans up a few days and propose without the fanfare. Drew said yes, and Ryan whispered in her ear that they would have to do the whole thing over again a couple of days later for the photographer, which was fine with her.

Ryan and Drew eloped, exchanging their vows on Oct. 16, 2020, at Mansion on Turtle Creek in Dallas. They had a drive-by reception a few days later at Heights Corner Market, owned by Ryan's family.

Their engagement and wedding happened quickly, but their union, they say, was 20 years in the making.

Drew wrote a Facebook post announcing their nuptials: "When this is all said and done, we'll celebrate and tell the story. We'll say we know it seems like a whirlwind, but if you only knew ..."

She says: “I felt absolute joy, and I felt relief. I couldn’t believe that we were there, that we were finally doing this thing. It felt like a special gift.”

He says: “The moment I saw her in her dress the first time was pure joy.”

She says: “Ryan always asks couples who have been married more than 15 years for their advice so we’ve gotten a lot — and a couple of hilarious stories. I would say, continue to find the good in each other.”

He says: “Communicate. And don’t go to bed angry.”

Print Headline: An engagement that was 20 years in the making