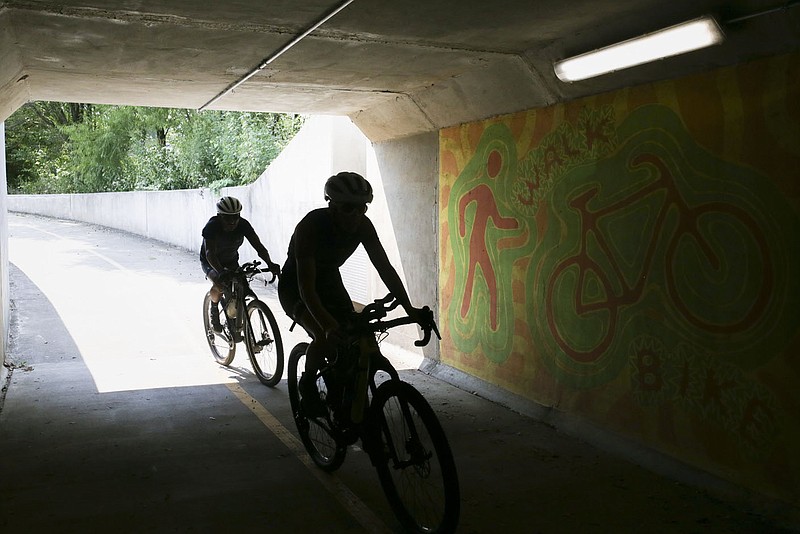 FORT SMITH -- Two major cities in the River Valley have expressed a desire to be part of a proposed state-spanning bike route leaders say could be a valuable asset.

Fort Smith's Board of Directors unanimously approved development of U.S. Bicycle Route 51 with the Arkansas Department of Transportation during its meeting Tuesday. The move included a request the bike route be extended in the future through Fort Smith to the Fort Smith National Historic Site at 301 Parker Ave.

The move comes after Van Buren's City Council unanimously approved the proposed route Aug. 23, according to the City Clerk-Treasurer's Office. It likewise asked the route be extended later through Van Buren, although it didn't specify an endpoint.

Van Buren Mayor Joe Hurst said having part of U.S. Bike Route 51 through Van Buren would benefit the city economically, calling bicycle tourism "a really burgeoning industry in the country." It would also come with environmental and health-related perks.

Van Buren wants to encourage bike travel in the region as much as possible, according to Hurst.

"I think we can follow in the footsteps of Northwest Arkansas and see the millions of dollars that have been poured into their economy, just bringing people in," Hurst said. "When they do go through your route, many of them will stop at various locations and spend money in your town, and so we know that that'll have a direct contribution to the economy."

Hurst believes the proposed route would also give Van Buren a desirable amenity encouraging people to move there. The city opened the Mr. Chad and Betty Ann Colley Wilderness Park last year, which has about 3 miles of mountain biking trails.

Jeff Dingman, Fort Smith's deputy city administrator, said the city recognizes bicyclists of all types comprise "a good portion" of its community. Being part of something such as U.S. Bicycle Route 51 goes hand-in-hand with the different amenities the city has recently completed promoting cycling, such as the Greg Smith River Trail and Riverfront Skate and Bike Park.

"When somebody talks about bicycle tourism in our area, we want to be a part of it," Dingman said.

Dingman believes the proposed route is attempting to provide an amenity for both residents and visitors. He said while Fort Smith wants a piece of the benefits coming from visitors, it likes being involved in projects providing something residents can enjoy as well.

Dingman wrote in a memo included in Tuesday's meeting packet that, should U.S. Bicycle Route 51 be extended through Fort Smith as requested, it would link from Midland Boulevard to the Greg Smith River Trail near Fort Smith Park and provide direct access to the downtown area.

Kimberly Sanders, bicycle-pedestrian coordinator for the Arkansas Department of Transportation, said U.S. Bicycle Route 51 is a proposed corridor running through western Arkansas. The department worked with Springdale-based Northwest Arkansas Regional Planning Commission to identify a potential alignment for a part of the route between the Missouri line and Alma, consisting entirely of existing infrastructure and spanning about 89 miles.

A map created by the Department of Transportation and provided by Hurst shows the route would run north from Alma on U.S. 71 through Mountainburg, Winslow, West Fork and Greenland until it reached Fayetteville. The route afterward would merge with the Razorback Greenway, a 36-mile shared-use trail that's primarily off-road, and go through Johnson, Springdale, Lowell, Rogers and Bentonville before continuing on U.S. 71 through Bella Vista.

However, as its name implies, U.S. Bicycle Route 51 would be part of a larger, nationwide system of routes called the U.S. Bicycle Route System, according to Sanders. The system is a planned network of 50,000 miles of "urban streets, county roads, greenways, trail systems and state highways for the purpose of interstate long distance bicycle travel."

The National Corridor Plan was approved by the American Association of State Highway Transportation Officials in 2008, Sanders said. The association also works with the Adventure Cycling Association, a nonprofit group, to promote and establish the U.S. Bicycle Route System.

"To date, 17,734 miles of the [bike system] have been designated in 31 states by the [association's] Special Committee on Route Numbering," Sanders said.

A copy of the National Corridor Plan available on the Adventure Cycling Association website shows should U.S. Bicycle Route 51 be developed as planned, it would go through Minnesota, Iowa, Missouri, Arkansas and Louisiana.

Sanders said the Department of Transportation has corresponded with regional planners in the River Valley, specifically Fort Smith-based Frontier Metropolitan Planning Organization, about routing U.S. Bicycle Route 51 through the region. Nothing can be concretely established until the American Association of State Highway Transportation Officials approves a designation for the route. A timeline for that hasn't been established.

One of the necessary steps to apply for a designation is to secure support from each jurisdiction that would have authority over a part of the route.

"Concurrence from the state of Missouri would also be required concerning the location that the route crosses the Missouri state line," Sanders said. "When support for a route has been established, concurrence from the Arkansas' Highway Commission would be sought before submitting an application to [the association] to request designation of the route as USBR 51."

Hurst said Van Buren would send a letter to the Department of Transportation that Frontier also helped with expressing both support for the proposed route and requesting it be extended through the city. Sanders said she received this letter, which came with a copy of the resolution the City Council approved Sept. 1.

Fort Smith's Dingman said Wednesday the city would send its own letter of support at some point "in the near future." 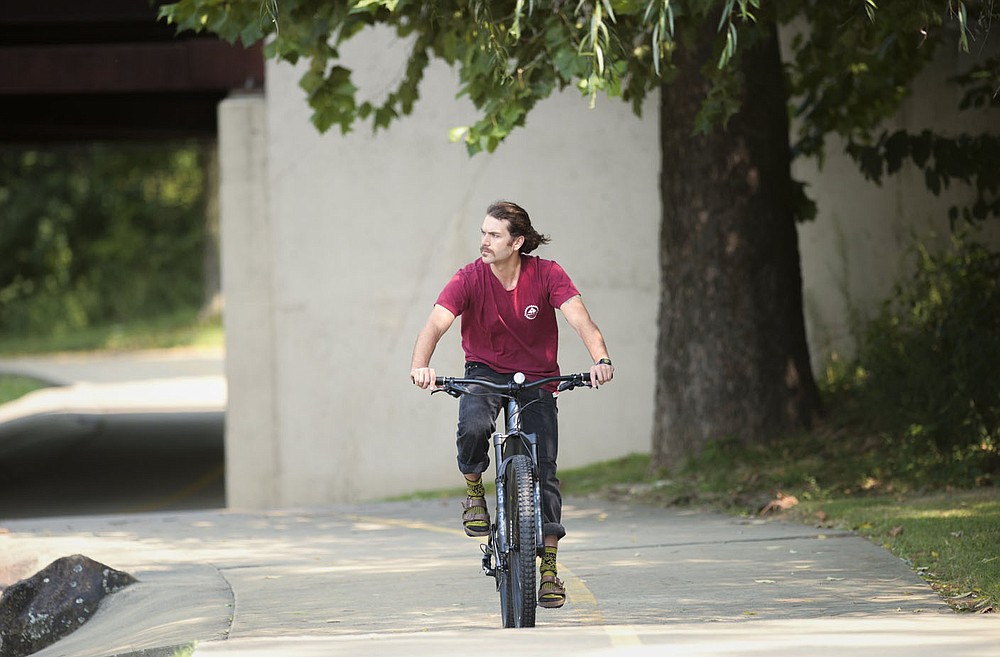 The Walton Family Foundation teamed with PeopleForBikes and BikeNWA to commission BBC Research & Consulting to study “Economic and Health Benefits of Bicycling in Northwest Arkansas” that was released in March 2018. The study found bicycling in Northwest Arkansas provides about $137 million in total economic benefits for the region annually. This includes about $51 million in benefits for businesses and about $86 million in health benefits. Bicycle tourism comprises about 52% of the business benefits, with out-of-state visitors spending about $27 million.