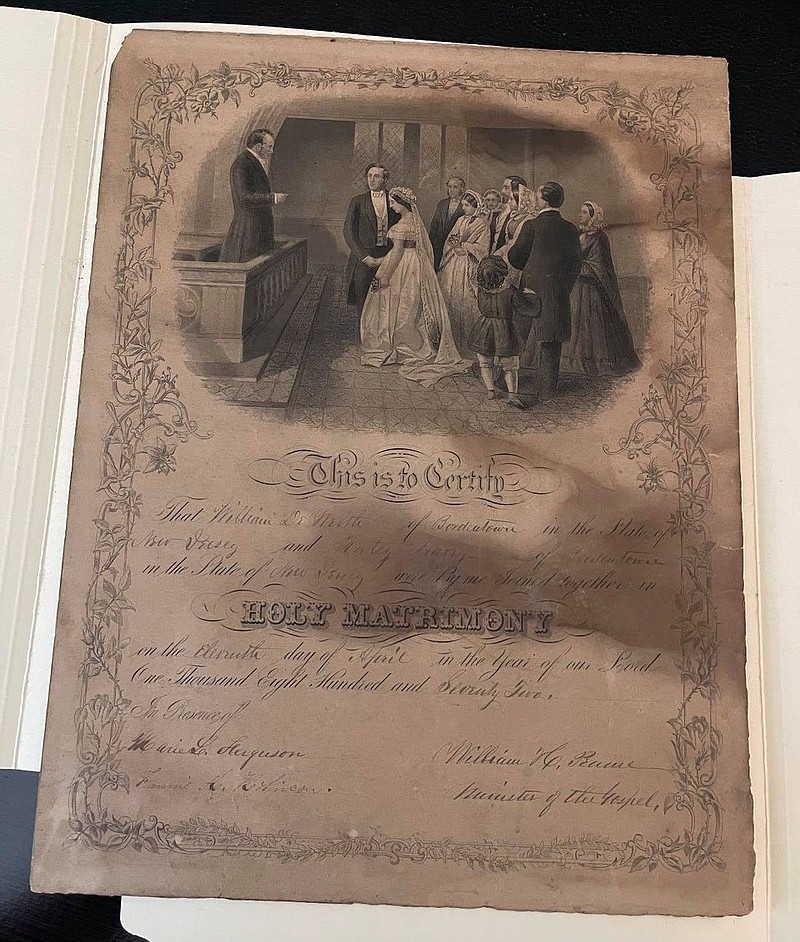 A New Jersey marriage certificate dated April 11, 1872, was found hidden behind a large picture frame that was donated to a North Carolina thrift shop in late July. (MUST CREDIT: Photo courtesy of Karmen Smith)

The marriage certificate, weathered and timeworn, was barely legible. What was somewhat clear, though, was the date: April 11, 1872.

Employees at a thrift store in Bolivia, N.C. -- a tiny town with a population of less than 200 people -- crowded around the nearly 150-year-old document, which had been tucked away in the back of a picture frame that was donated in late July. The framed picture was of a girl placing flowers in a dog's collar. Employees were puzzled.

Not only were they baffled by how the document journeyed from New Jersey -- where the marriage license was issued -- to a small North Carolina town, but they also wondered why it was stashed behind a frame in the first place.

"Why was it hidden? Was it a forbidden love? Was this maybe a situation where they wanted to secretly get married? Immediately, my curious mind went into overdrive," said Karmen Smith, executive director of Hope Harbor Home, a domestic violence program and shelter, which operates three thrift shops in Brunswick County. Proceeds from the shops support the organization.

Given that the donor of the frame did not get a tax receipt, "we didn't have any information," said Smith, 30.

She was determined to dig into the mystery.

"I had a lot of questions flowing through my head that I could not just leave alone," she said.

Smith decided to put out a plea on Facebook. Although the document clearly featured only the first names of the New Jersey couple -- William and Katey -- she was hoping to track down their descendants and return the marriage certificate.

"This a true treasure and was obviously, at one point in time, protected," Smith wrote in the post. "How cool would it be if we could find the family of this couple?! Let's see what we can do!"

At the time, "I didn't have a lot of confidence that we would find any relatives," Smith said. But "if nothing else, it would be a fun adventure."

It turned out to be far more fun than she imagined. Sleuths on social media got to work right away, and within only a few days, the case of the mysterious marriage certificate had more or less been cracked.

Although many people reached out with clues, a local genealogist stumbled upon the story, and before long, she began to connect the dots.

Connie Knox was at her home in Wilmington, N.C., when a story about the 150-year-old marriage certificate was featured on the local news.

"Being a genealogist, my ears just popped up," Knox, 60, said. "I realized there's enough information to research it. To me, that is kid-in-a-candy-shop kind of stuff. I couldn't resist."

So began her genealogical quest, which yielded surprisingly swift results, considering the limited information she had to begin with. Knox started her search on Ancestry.com, and cross-referenced names, places and dates that corresponded with the faded details on the marriage certificate. After tracing one of the witnesses on the document, she was able to draw some conclusions.

"It turns out the bride and one of the witnesses were schoolmates in a school document I found," said Knox, who hosts a YouTube channel called Genealogy TV. "It did take me three full days to really flesh it out properly and write a report to know that I had the right people."

She determined that the bride was Katharine Havey DeWorth and her groom was William Tindall DeWorth.

Once she was confident that she had found the correct couple, "I had to start tracing forward to figure out who was the most direct descendant," Knox said. "That's when I found Irene Cornish."

Cornish, 65, was at her home in Upstate New York when she spontaneously decided to log on to Ancestry.com.

What led her there, she said, "was an unusual series of events," as she doesn't regularly visit the website.

Cornish -- who is also interested in genealogy -- was hoping to do some research about her great-uncle on the other side of her family, when she noticed she had several messages on Ancestry, including one from Knox.

"I could have gone months and never noticed any of this. It's really pretty stunning to me," said Cornish, who grew up in Silver Spring, Md. "I don't usually have people contact me through Ancestry."

She zoomed in on a photo of the marriage certificate and, upon close examination, was able to decipher the full names.

"I knew it was my great- grandparents," she said. Considering the date and the fact that it was issued in Bordentown, N.J., "everything fit."

For Cornish, whose middle name is Katherine -- in honor of her great-grandmother -- the unexpected message from Knox came "at the perfect time."

Her mother died in 2010, and "I was at a point where I was feeling kind of isolated and sad because my relatives live at a distance. It felt like my mother, grandmother and great-grandmother were reaching out in some way."

Plus, "I've never been able to find out a lot of information about them," she said, adding that only one of her grandparents was alive when she was born, and she isn't in close contact with most of her distant relatives.

Cornish isn't sure why the marriage certificate was hidden, although she suspects that since safe-deposit boxes were not common back then, a picture frame would have been a good place to preserve important documents.

Either way, she was elated to hear about the existence of the marriage certificate, and she hopes the publicity surrounding it will help her connect with distant relatives who might have more information about her lineage.

Knox organized a Zoom call with Cornish to share her findings, and they connected with Smith at the thrift store to organize a date to meet in person, at Cornish's insistence.

"For one thing, I didn't want to trust such an old document in the mail, and also, I was so touched that Karmen reached out to try to find a family member that I wanted to meet her and the other people involved," Cornish said.

On Aug. 22, Cornish flew to Wilmington and drove to the thrift store the next morning, where she met Smith and Knox to retrieve the long-lost marriage certificate.

"It was so exciting to be with Irene. She had a permanent smile on her face," Smith said. "The second the certificate was handed to her; she just broke down in tears. The realization that this was officially in her possession struck her all at once."

Indeed, holding the 150-year-old document for the first time "was very overwhelming," Cornish said. "I'm still in shock that the document even exists, let alone that it was located and then through this chain of events I was able to find out about it and actually get it."

Meeting the women who helped reunite her with a piece of her family's past "really touched my heart," she said. "They all feel like family somehow."

The thrift store gave Cornish the certificate and the framed picture free. She made a donation to Hope Harbor Home in honor of her great-grandparents, she said. And she also bought a bracelet and necklace from the store.

Cornish, who doesn't have children, intends to frame the cherished document, and eventually she hopes to donate it to an archive association or the Bordentown Historic Society. She also plans to make several copies, which she will mail to all her living relatives.

Connecting with Smith and Knox, and claiming a small vestige of her legacy, she said, has been "an incredible bright spot."

It's also been a memorable and gratifying experience for Smith.

"To anyone else, it's a piece of paper, but to her, it's a part of who she is," she said. "Returning a piece of someone to them is a very joyful feeling." 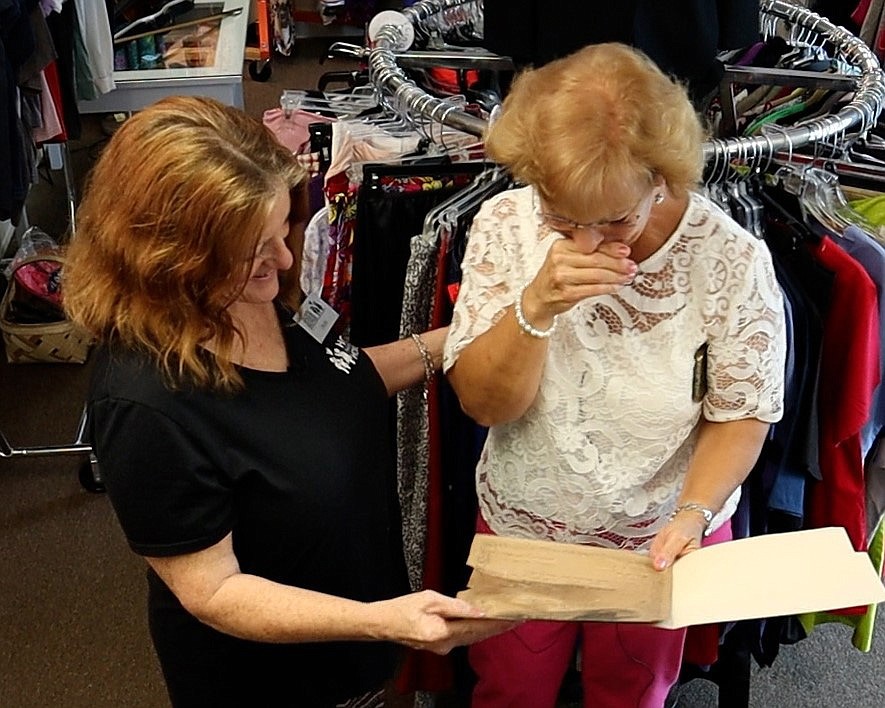 Irene Cornish was moved to tears when she first held the marriage certificate. Pam Phelps, left, was the thrift store manager who originally found the nearly 150-year-old document. (MUST CREDIT: Photo courtesy of Connie Knox) 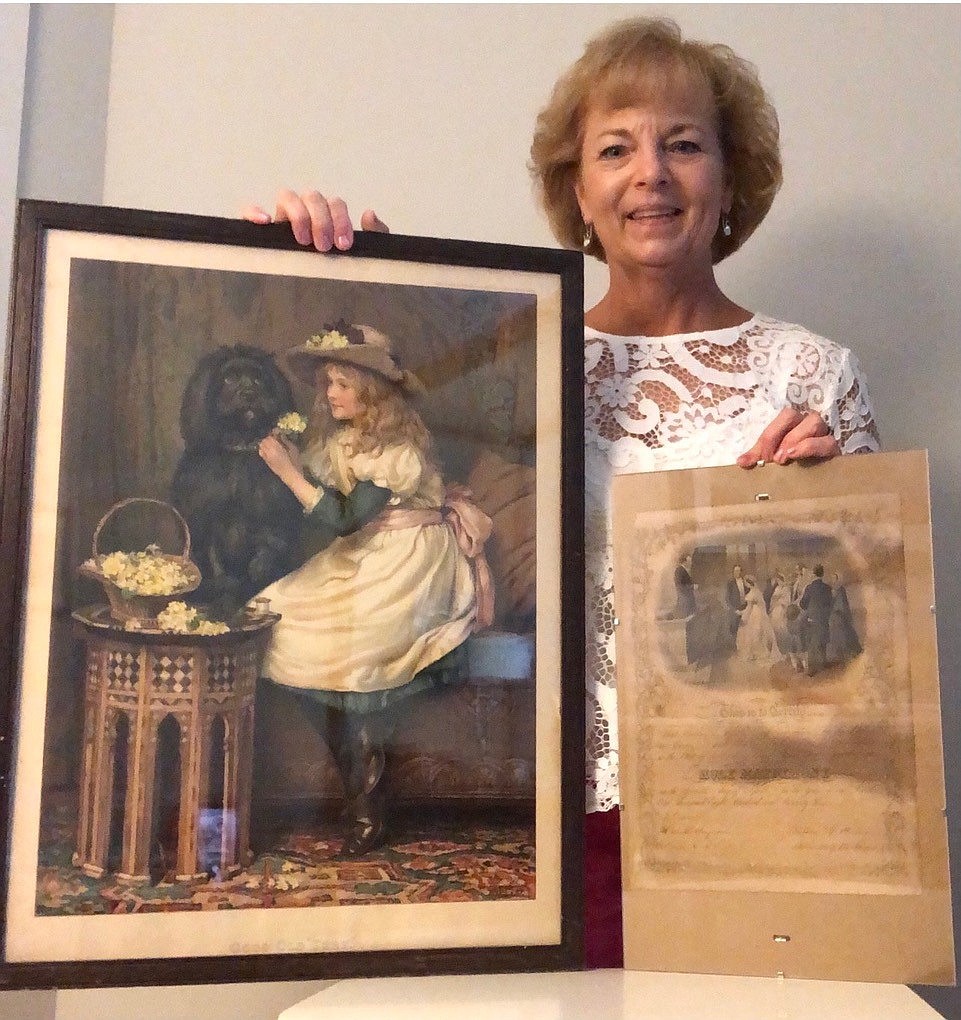 Irene Cornish, the great-granddaughter of Katharine Havey DeWorth and William Tindall DeWorth, now possesses their marriage certificate, as well as the large picture frame in which it was hidden. (MUST CREDIT: Photo courtesy of Irene Cornish)

Irene Cornish has limited photos and information about her great-grandparents. William Tindall DeWorth, right, is pictured in the left photo with his son, Enoch. Katharine Havey DeWorth is pictured in the right photo on the far right, wearing a kimono that her son, Joseph, brought back for her from overseas. (MUST CREDIT: Photo courtesy of Irene Cornish)