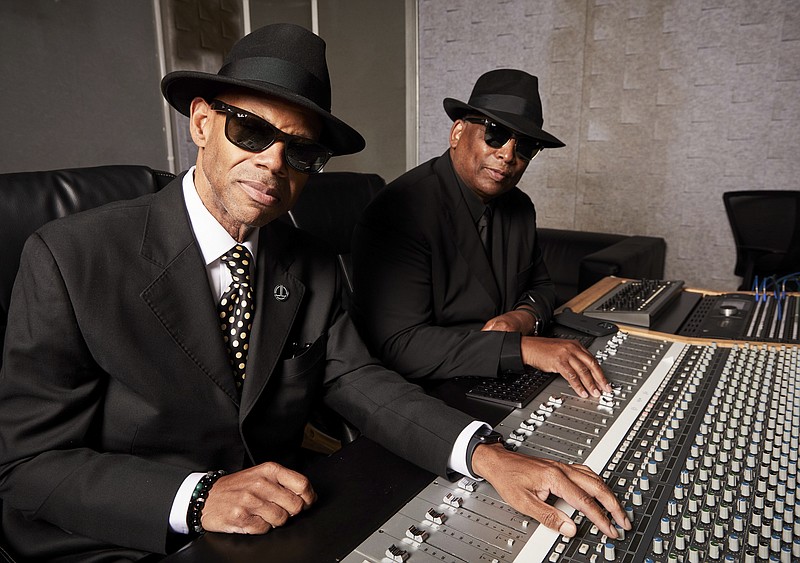 If anyone questions being too old to try something new, look no further than iconic music producers Jimmy Jam and Terry Lewis.

"As you get older in life, we realized that there's [fewer] first times you get to actually experience things," Jam said. "For us, all the first times are very exciting."

Despite nearly four decades in the business, five Grammys and widespread reverence across the recording industry, the producing-songwriting duo known as Jam & Lewis recently accomplished one major goal: they released their debut album.

"Music has always still been a part of our lives, but we did take some time off to do some important things, which was basically raise our kids," said Jam, a two-time chairman of the Recording Academy. "Now, we're selfish again."

"Jam & Lewis, Volume One," which landed at No. 49 on Billboard's Independent albums chart, is a 10-song project featuring a who's who of R&B singers. Some are previous collaborators, like Mariah Carey, Usher, Mary J. Blige and Boyz II Men. Others are new partnerships such as Toni Braxton, Babyface andThe Roots.

"There's a thing that we call 'hang factor,' and I don't like working with people if I can't hang with them," Lewis said. "We hang, we try to find out what the vision is, and then we start trying to create that vision."

The hang factor helped birth records like "Somewhat Loved" with Carey, which in late August reached the Top 10 on Billboard's Adult R&B chart; the midtempo track features Carey emotionally lamenting about lost love. "He Don't Know Nothin' Bout It," which peaked at No. 4 on the same chart, mirrors past Babyface slow jams as he attempts to persuade a woman that she deserves better. There's also a quintessential Toni Braxton sound on "Happily Unhappy," a beautiful song about heartbreak that's so timeless, it could've been released two decades ago, yet still feels perfect today.

Dubbing their sound "new nostalgia," the album doesn't push boundaries or dabble into the trap beats, heavy Auto-Tune and sing-song vibe of much of today's R&B. They chose to stay within the traditional soul sounds that made these 2017 Songwriters Hall of Fame inductees uber-successful.

Jam, 64, born James Harris III, and Lewis, 62, grew up in Minneapolis with its bustling 1970s local music scene. Jam attended middle school with Prince, and a post-high school reunion led them to start playing with Morris Day and the Time, with Prince doing most of the writing and producing. (Day is also featured on the album.)

After disagreeing on projects outside of The Time, Prince fired them, sparking Jam's and Lewis' producing career. "There's not a day we don't think about [him] and we don't think about as we're making music: 'I think Prince would like this. I think he'd approve of this. He'd like what we're doing here,''' said Jam, smiling.

The duo helped craft hits for the S.O.S Band, Chaka Khan, George Michael, New Edition and more, including classics like the uplifting "Optimistic" by Sounds of Blackness; "No More Drama" by Mary J. Blige; "Rhythm Nation" by Janet Jackson; "Scream," a collaboration with her legendary brother Michael; and "Open My Heart" by gospel icon Yolanda Adams.

They're responsible for more than 50 Billboard No. 1 songs on the pop, R&B and dance charts — all while donning their signature all-black suits. ("All the decisions you have to make throughout a day, if you can take one decision out, that just leaves a hole for other thinking," Lewis said.)

Jam & Lewis say they got away from their original album plans after helping propel Janet's early, unremarkable music career into superstardom by handling the bulk of her hit 1986 hit album "Control," establishing them as in-demand producers.

Now, they've come full circle to finish what they started. But there is one glaring omission on "Vol. 1": Miss Jackson.

"There's a lot of people, a lot of music, a lot of great artists ... we're going to try to cover them all if we can get there," Jam said. "But Janet would be absolutely wonderful. And there's a space reserved [on] 'Volume Two' for her."

BACK TO THE FUTURE

While the new nostalgia sound showcases artists who may be on the back end of their careers, Jam & Lewis still have their ears pointed to the future.

"We've already kind of collaborated with H.E.R. obviously on the song 'Damage,'" said Lewis of the hit song, based off Herb Alpert's "Making Love in the Rain," which they wrote and produced. "It would be great to do something totally from scratch with H.E.R."

The music brothers say they weren't concerned whether critics might think the moment had passed to drop an album. One of their remaining bucket list items includes playing instruments live as they perform for fans.

It's been 35 years since "Control" jump-started their producing careers but unintentionally delayed some of their personal ambitions. So, are there any regrets?

"To me, it is God's timing," Jam said. "It all happens the way it's supposed to happen."