Radiochronometry to find answers on possible Nazi origins by The New York Times | September 12, 2021 at 5:02 a.m. 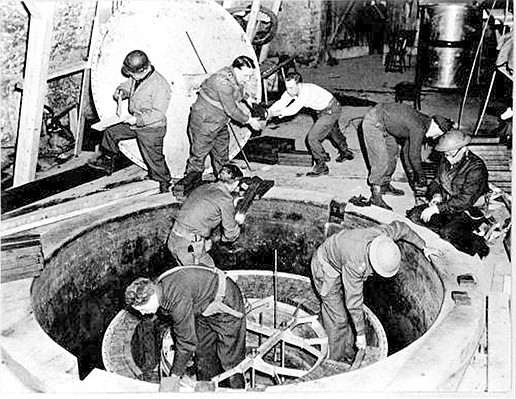 A photo provided by the Brookhaven National Laboratory shows the dismantling of the German experimental nuclear pile at Haigerloch, southwest of Stuttgart, in April 1945. Scientists at the Pacific Northwest National Laboratory and the University of Maryland are working to determine whether three uranium cubes they have in their possession were produced by Germany’s failed nuclear program during World War II. (David Irving/Brookhaven National Laboratory/Emilio Segrè Visual Archives via The New York Times) -- NO SALES; FOR EDITORIAL USE ONLY WITH NYT STORY SLUGGED NAZI URANIUM BY JESUS JIMÉNEZ FOR SEPT. 10, 2021. ALL OTHER USE PROHIBITED. --

The failure of Nazi Germany's nuclear program is well established in the historical record. What is less documented is how a handful of uranium cubes, possibly produced by the Nazis, ended up at laboratories in the United States.

Scientists at the Pacific Northwest National Laboratory and the University of Maryland are working to determine whether three uranium cubes they have in their possession were produced by Germany's failed nuclear program during World War II.

The answer could lead to more questions, such as whether the Nazis might have had enough uranium to create a critical reaction. And if the Nazis had been successful in building an atomic bomb, what would that have meant for the war?

Researchers at the laboratory believe they may know the origins of the cubes by the end of October. For the moment, the main evidence is anecdotal, in the form of stories passed down from other scientists, according to Jon Schwantes, the project's principal investigator.

The lab does not have scientific evidence or documentation that would confirm that Nazi Germany produced the black cubes, which measure about 2 inches on each side. The Nazis produced 1,000 to 1,200 cubes, about half of which were confiscated by the Allied forces, he said.

"The whereabouts of most all of those cubes is unknown today," Schwantes said, adding that "most likely those cubes were folded into our weapons stockpile."

"The crux of our effort is to first and foremost confirm the pedigree of these cubes," he said. "We do believe they are from Nazi Germany's nuclear program, but to have scientific evidence of that is really what we're attempting to do."

When they were first produced, the cubes were essentially pure uranium metal. Over time, that elemental uranium has partly decayed into thorium and protactinium. To determine the age of the cubes, researchers plan to use a process called radiochronometry, which can separate and quantify the cubes' chemical makeup.

"Uranium decays at a regular rate," Schwantes said. "So when we measure the ratio of thorium to uranium in the cube, that is essentially a measure of the amount of time that has passed."

And fixing a time when the cubes were made would help in tracing whether it could have been in the early 1940s in Germany. Such a determination would also raise more questions: Could the Nazis have built their own bomb, lengthening the war or even changing the outcome?

German forces were defeated by the Allies in May 1945, ending the war in Europe. In the Pacific, Japan held on until September, surrendering only after the U.S. dropped atomic bombs on the cities of Hiroshima and Nagasaki, killing tens of thousands of people.

Schwantes, who said he gravitated toward math and chemistry in school, said he preferred not to speculate about how history could have been different, but said it was surreal to "hold this kind of historic material in hand and think about where it's been, and who else has held it."

Some historians contend that even with nuclear capability, the Nazis would not have been able to change how the war ended.

Kate Brown, who teaches environmental and Cold War history at MIT, speculated that Nazi Germany's production of nuclear weapons probably wouldn't have had much of an impact on the war.

"They were in total war mode, increasingly so," she said. "They could have made a dirty bomb. That's not as difficult as making a nuclear bomb."

A key ingredient the Germans needed to produce an atomic bomb was heavy water, which is water made of a hydrogen isotope called deuterium that has twice the mass of regular hydrogen.

In their quest to produce an atomic bomb, the Germans wanted to use a method in which uranium is submerged in heavy water, Brown said. But the Allies dealt those plans "a big blow" when they bombed a plant in Norway that was the only place the Germans could get the key ingredient, she added.

Additionally, to succeed in its efforts, Nazi Germany would have needed large factories to produce bombs, vast tracts of land to test them and security from the threat of aerial attacks so that enemies could not spy on them, Brown said.

Adam Seipp, a history professor at Texas A&M University, said Nazi Germany lacked the resources because it was "really bad at industrial production."

"It's one of the reasons they lost the war so catastrophically," he said.

Brown said that even if Nazi Germany had been able to produce a dirty bomb, the Germans would have needed a plane that could fly undetected for a long distance.

"They wouldn't have had planes that could have reached cities like Moscow," she said. "Really, the only target I can think of would be London," she said.

Brown said that while a Nazi bomb would not have had much of an impact on the war, the Nazis set the stage for the Cold War simply by trying to build one. The Soviets, who were then U.S. allies in defeating Germany, were aware that the Americans took this uranium out of the country "right out from under them," she said.

"That becomes a real engine for suspicion that sets up the Cold War, almost immediately," Brown said.

For now, Schwantes said preliminary results on two cubes look promising. The science being used to date the cubes is not new, he said, adding that radiochronometry is the same technique scientists used to establish the age of the Earth as 4.5 billion years. 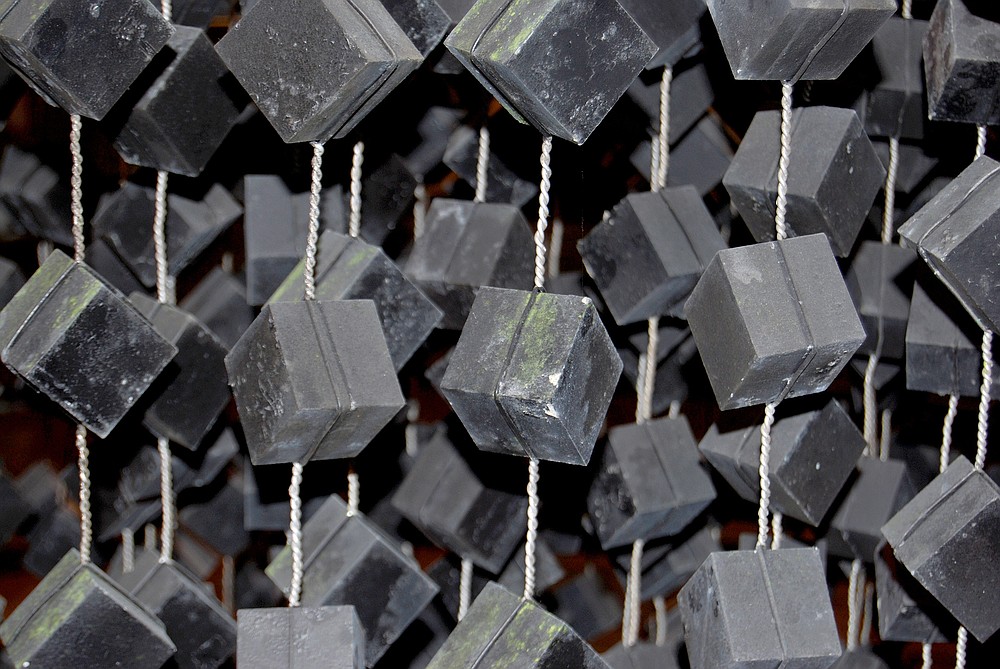 A photo provided by Felix König shows uranium cubes on chains in the model of the Haigerloch reactor in Germany. Scientists at the Pacific Northwest National Laboratory and the University of Maryland are working to determine whether three uranium cubes they have in their possession were produced by Germany’s failed nuclear program during World War II. (Felix König via The New York Times) -- NO SALES; FOR EDITORIAL USE ONLY WITH NYT STORY SLUGGED NAZI URANIUM BY JESUS JIMÉNEZ FOR SEPT. 10, 2021. ALL OTHER USE PROHIBITED. --