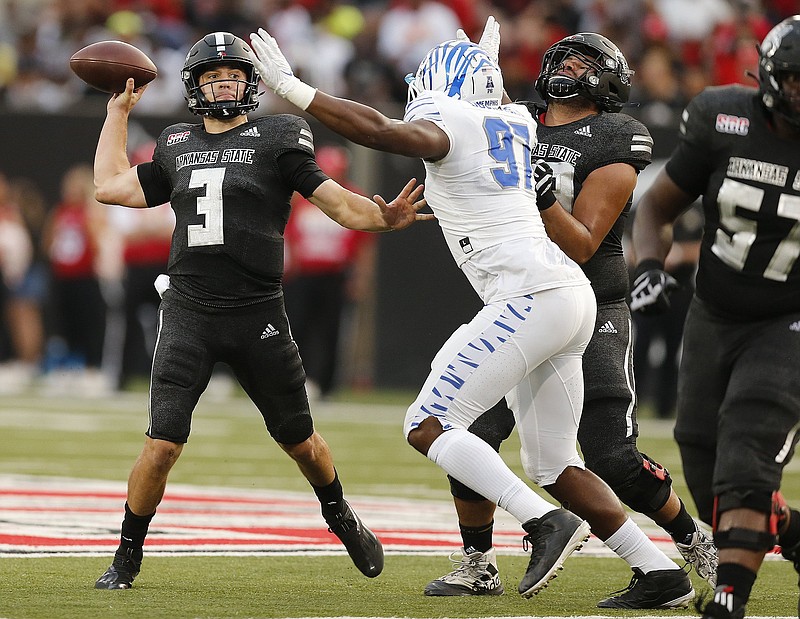 JONESBORO — For a fleeting moment, it appeared as if Arkansas State University was going to author an eerily similar script: Starting quarterback comes out in the third quarter, backup enters and helps the Red Wolves to a come-from-behind win.

The only thing different was going to be who’d emerged from the ASU sideline.

Memphis, however, had shredded those pages before they could be written.

In the 60th edition of the Paint Bucket Bowl, the Tigers mauled the Red Wolves’ defense, hanging on for a 55-50 shootout victory in their first trip to Centennial Bank Stadium since 2012. Despite getting outgained 681-680, Memphis ran rampant, piling up 263 yards on the ground — good for 7.1 per carry — and three rushing scores.

True freshman Seth Henigan threw for five touchdowns and 417 yards while completing 22 of his 33 passes for the Tigers, outdueling James Blackman, who relieved Layne Hatcher a week after Hatcher went a perfect 12 for 12 a week ago in Blackman’s stead.

ASU Coach Butch Jones wouldn’t call it a moral victory. He did say afterward how proud he was of a group of “relentless competitors” that nearly dug themselves out a 19-point hole in the final 10 minutes.

“I thought our players showed a lot of heart,” Jones said. “But when you really dissect it, what it takes to play winning football, you still go back to the first half. … Our tackling, our fundamentals, our discipline to execute on defense was not there. That’s a really good team we played, but the big plays are unacceptable, the missed tackles are unacceptable, and we’ll get to work on that.”

The Red Wolves were gashed on the ground over the opening 30 minutes, surrendering 230 rushing yards before the teams headed back to the locker room. North Little Rock’s Brandon Thomas ripped off a pair of long touchdown runs for Memphis (2-0) — first a 70-yarder in the opening quarter and then a 75-yard score, blasting right through the heart of the Red Wolves’ line.

The Tigers put the night’s opening two scores on the board via passes from Henigan and looked like it might turn things into a rout early after Thomas’ first score made it 20-7 in the latter half of the opening quarter.

“[We weren’t playing] assignment football,” defensive end Joe Ozougwu said. “People were trying to do extra. We just had to come together and figure out what the problem was with all the open gaps.”

ASU (1-1) started to crawl back, seizing on both a Memphis fumble and a muffed punt, but the Red Wolves managed only a pair of Blake Grupe field goals, one of which was a career-long 48-yarder, to get back within a touchdown at 20-13.

The shootout only continued with three more touchdowns before intermission, highlighted by Thomas’ long scamper through the heart of the ASU line.

When ASU sputtered coming out of the half, punting on each of its first three series, Jones decided to pull Hatcher, who’d thrown for 276 yards and a touchdown despite never finding any real rhythm.

“It was just a gut feel,” Jones said when asked about the decision to insert Blackman. “We needed a spark. … That was the James Blackman we saw in training camp, where he’s very aggressive, very confident, very rhythm-oriented in his drop.”

In less than 20 minutes, the Florida State transfer completed 19 of 28 passes for 308 yards and 4 touchdowns, igniting a 27-14 Red Wolves’ run that ultimately gave ASU a shot to steal a victory in the final moments.

“I just went with the offense and trusted [offensive coordinator Keith Heckendorf],” Blackman said. “I listened to what he was telling from up top, what he was seeing, just telling me to go through my reads and just make the throws.”

On his third play from scrimmage, Blackman hit wideout Jeff Foreman, who pulled in the 46-yard grab as he was falling to the ground. On the next snap, the 6-5 quarterback redirected Corey Rucker and found the sophomore in the back corner of the end zone for a touchdown.

Two offensive plays later, Blackman connected with Foreman on another long attempt, hitting the Oklahoma City native in stride for an 89-yard score — the third-longest passing touchdown in program history and the second 80-plus-yard grab of Foreman’s career.

The pair nearly connected once more on the last play of the night. After forcing a punt and down 55-50, the Red Wolves needed to go 96 yards in 59 seconds. Blackman led the offense to the ASU 44-yard-line before launching a Hail Mary in Foreman’s direction that was batted down.

In Jones’ mind, it shouldn’t have come to that.

“They did a good job of always answering us,” Jones said of the Tigers. “We’d get the momentum back, we’d score on offense and then we could never get off the field defensively. But to our kids’ credit, they kept fighting, they kept believing and they kept playing. Because of that, when we didn’t play our best football, that gave us an opportunity to win the game.”