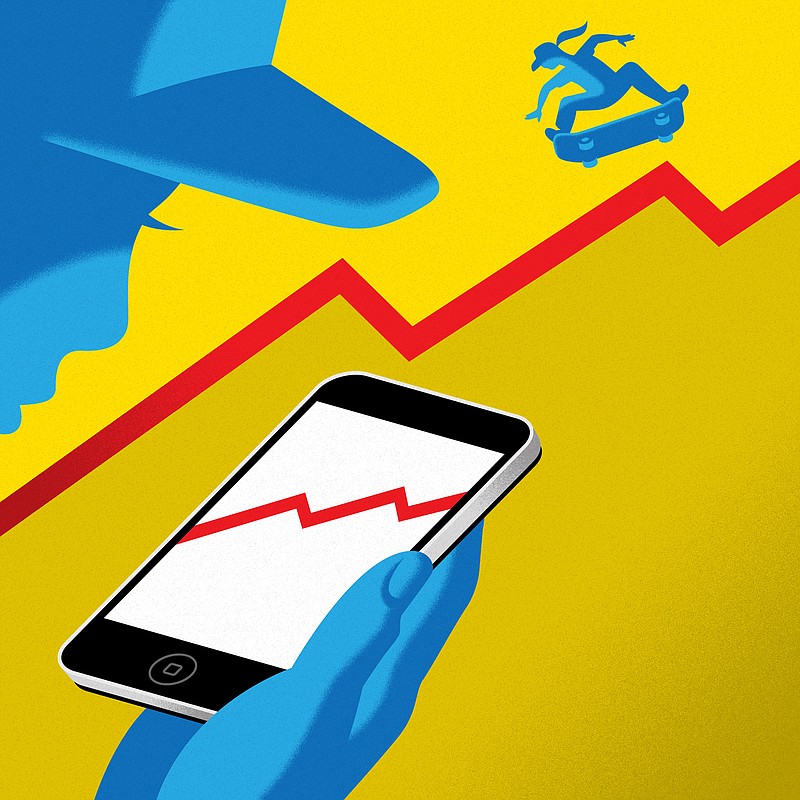 Digital tools have the potential to be a catalyst for financial education, particularly among young people. (The New York Times/Thomas Fuchs)

A new crop of mobile money apps are promoting themselves as part of the solution to a stubborn problem: a lack of financial savvy, particularly among young Americans.

They have caught the attention of researchers and financial advisers who say the tools might help engage and enlighten young users, but they worry that the apps, without close parental involvement, could encourage bad financial behavior.

An analysis published in August by the Milken Institute, a public policy think tank in Santa Monica, Calif., deemed lack of sound financial knowledge among young people and adults to be a "worrisome" barrier to economic advancement.

Although many Americans lack the knowledge necessary to make smart decisions about money, the Milken report said, digital tools have the potential to be a "catalyst" for financial education, particularly among young people, who are avid users of apps.

Young people might tune out dry concepts they hear in a classroom, but the apps convert information into colorful, interactive graphs. "The tool makes it very real," said Oscar Contreras, an economist at the Milken Institute and one of the report's authors.

Financial technology, or "fintech," startup companies are embracing the financial literacy trend, seeing a way to sign up customers early by offering personal finance instruction along with spending and saving tools.

Copper, for instance, bills itself as "the only bank that teaches teens about money," and offers peppy videos and a financial literacy quiz that teenagers or their parents can take. A sample question: "Suppose you have $100 in a savings account earning 2% a year. After five years how much would you have? (A) More than $102; (B) Exactly $102; (C) Less than $102; (D) I honestly don't know. (The desired answer is A, because of the effect of compound interest — a bedrock financial concept.)

Rachel Pendergrass, a teacher and softball coach at Columbia High School in Huntsville, Ala., said she found Copper last spring while searching online for updated lessons to use in a personal-finance class she was teaching for the first time.

"I didn't feel like teaching them to write a check was very relevant to them," she said.

Copper provided introductory letters that Pendergrass sent home to parents, who could approve their child for the app, which links to a digital bank account and a debit card — or not.

Most were receptive, she said, because they liked the idea of being able to easily send their children money: "It was all voluntary, not an assignment." In the classroom, Copper's "cheat code" videos, which offer quick lessons on topics such as "What do banks actually do?" and "What is an IPO?," helped inspire discussions.

Step, an app that is intended for teenagers and has about 2 million users, declares on its website: "We want to make learning about money fun and interesting." Step's website offers trendy videos and short articles such as "Outfits that slay: The ultimate guide to [low-cost] showstopping, back-to-school looks."

"Most schools don't teach kids about money, and most families don't talk about money," said CJ MacDonald, Step's founder and CEO. "It became very clear there was a gap in the market."

Step offers a secured credit card rather than a debit card. With secured cards, users make a deposit that serves as collateral; they can spend up to the amount of the deposit, and build credit when using it.

The card provides "training wheels" so users can transition to real credit cards when they are old enough, MacDonald said. (The minimum age to open a credit card is 18, but people younger than 21 face tougher criteria to qualify.)

Greenlight began as a tool to help parents manage children's chores and pay them an allowance or give them spending money, since people increasingly don't have cash on hand. Now Greenlight, which debuted in 2017, has more than 4 million accounts and has added features, including cash back on its debit card, and an option that lets kids invest through a brokerage account opened in a parent's name.

Kids of any age can research, buy and sell stocks -- including fractional shares -- as well as exchange-traded funds. The app including the investing option costs about $8 a month, but there's no extra fee for trades. To trade, the child must request approval from the parent through the Greenlight app.

Greenlight CEO Tim Sheehan said the investment option was a logical step after children learned the basics of saving and spending within their means. The option includes access to research from Morningstar and offers short videos that explain investing concepts, including a price-to-earnings ratio.

Although the apps appear promising, they make some financial education advocates wary. Lennette Coleman, president of the FoolProof Foundation, which promotes "healthy skepticism" about financial products, said it felt "irresponsible" to allow children -- who may not have fully absorbed lessons about the necessity of working to earn money, saving it and spending it wisely — to invest in stocks.

If apps make a game out of investing, she added, children can become more engaged -- but they can also be more likely to take risks.

"There's a lot of nuance in the stock market," she said, "and they don't understand those nuances."

Tim Lambrecht, director of education at Budget Challenge, a program that uses simulations to teach students about bill paying, budgeting and investing, said that apps could get teenagers excited about investing, but that most emphasized buying individual stocks and skimped on information about long-term investing in index funds in tax-advantaged accounts.

"That sends the wrong message," he said. "You have to invest for retirement; you can't save enough."

Definitions of financial literacy vary; some researchers consider it the ability to understand basic tenets of personal finance, such as compound interest and inflation, while others define it more broadly to encompass attitudes about money and financial decision-making.

The U.S. Financial Literacy and Education Commission, created nearly two decades ago, describes it as the "skills, knowledge and tools that equip people to make individual financial decisions and actions to attain their goals."

The Milken Institute report argues that because the rapid adoption of digital financial tools carries new risks -- including fraud and data privacy concerns -- financial literacy must include "the knowledge and skills required to use digital financial services effectively."