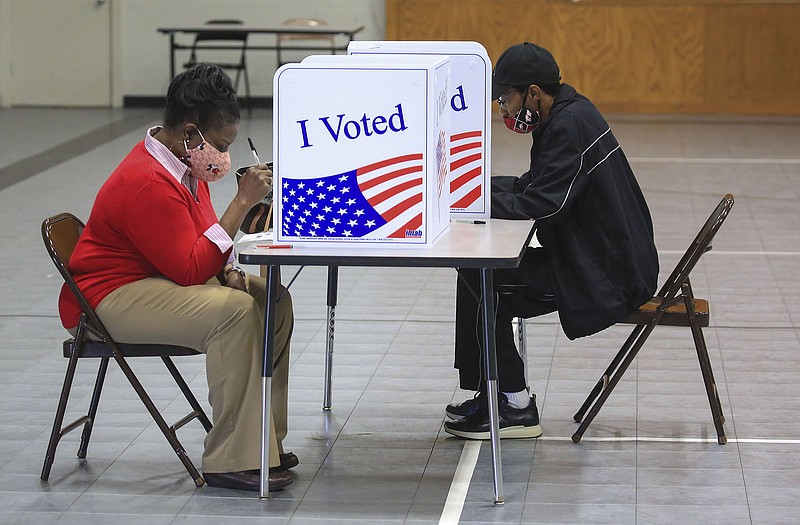 Arkansas ranked last in the U.S. in both voter turnout and registration during the 2020 election, according to a federal report on the election published last month. The Natural State also had the highest absentee ballot rejection rate of all 50 states.

What exactly were Arkansas’ voter registration and turnout statistics?

According to the U.S. Election Assistance Commission's biennial report, Arkansas, a state with a population of just over 3 million, had 1.4 million active registered voters in 2020 or about 63% of the eligible voting age population.

The total voter turnout was about 1.2 million. That works out to just 54% of Arkansas' eligible voting age population turning out to vote in 2020, the lowest proportion of any state.

Nationally, voter turnout was 67%, the highest level documented and a 6.7% increase from 2016 levels, according to the report.

The highest states for turnout as a percentage of the eligible voting age population were Minnesota at 79.1%, Colorado at 78.2% and Maine at 76.2%.

After Arkansas, the states with the next lowest voter turnout were Oklahoma at 54.4% and West Virginia at 56.4%.

What about absentee ballot rejection?

Arkansas had the highest proportion of mailed-in ballots that were rejected, with 6.4% tossed. There were 84,910 ballots cast by mail, comprising 7% of the state's turnout.

The nationwide average of the proportion of absentee ballots rejected was just below 1%.

Only two states other than Arkansas, New Mexico and New York, rejected more than 3%.

Why was voter turnout so low?

Janine Parry, a political science professor at the University of Arkansas, Fayetteville, said she believes Arkansas’ system of voter registration is designed to reduce voter turnout.

More than three-quarters of states offer online voter registration, and those aren't just blue states. Arkansas is one of seven states where it's unavailable; the others are Maine, Montana, New Hampshire, North Dakota, South Dakota and Wyoming.

Roughly half of states offer same-day registration or a period of overlap between in-person and early voting and the close of voter registration, so an individual can register to vote and cast a ballot on the same day. Arkansas does not.

She also said nationwide, voter turnout tends to correspond with income and education level — higher levels of either usually correlating with higher voter turnout — and Arkansas is low in both those categories.

Rep. Mark Lowery, R-Maumelle and candidate for Secretary of State, said he believes low election participation is a consequence of people not having confidence in the electoral system.

Go here to read more about the report and see graphics comparing Arkansas’ statistics from the 2020 election to the rest of the nation.