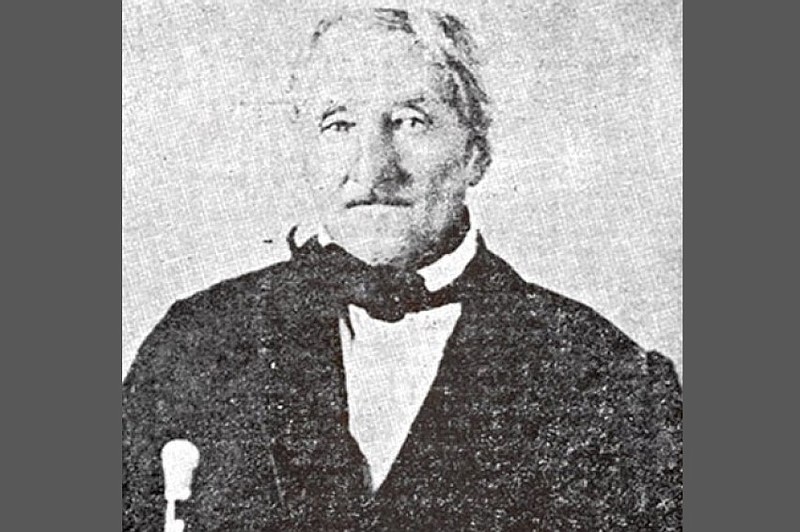 Antoine Barraque, an enterprising and often controversial Frenchman, established New Gascony, one of the earliest settlements in what is now Jefferson County. (Special to The Commercial)

What prompts a man who has it all to look for his future in an untamed wilderness? Antoine Barraque would be a good person to ask.

Barraque was born on April 15, 1773, in southwestern France. Educated in Paris, he served in the French army under Napoleon Bonaparte, fighting at the battles of Marengo, Austerlitz, Jena, Lodi, and Moscow.

Following the end of Napoleon's empire, Barraque relocated to Arkansas, arriving in 1816 at the age of 43. The history books don't say why Barraque decided to make the move, but it's safe to speculate that prospects were better here.

The following year, Barraque married Maria Therese Dardenne, the daughter of his friend, Joseph Dardenne, another French immigrant, and a Quapaw woman. Barraque then established the settlement he called New Gascony.

Thanks to his marriage, Barraque maintained good relations with the Quapaw tribe, but he experienced conflict with other tribes, especially the Osage, who attacked a hunting expedition led by Barraque on Nov. 17, 1823, killing seven men and capturing or destroying more than $4,000 worth of property.

Barraque spent years seeking retribution, first demanding that the Osage be attacked and punished for their raid, and later seeking compensation for damages, but his requests were denied by the territorial government because he and the hunting party had encroached upon Osage lands.

In 1824, the Quapaw tribe signed a treaty exchanging one million acres between the Arkansas and Ouachita rivers for land along the Red River in Louisiana and about $26,000 in goods and cash to be paid over 11 years.

Barraque was appointed by Gov. George Izard as a sub-agent to work with the Quapaw. He began in this post in June 1825 and supervised the migration of 455 Quapaw in January and February of the following year.

Although the group arrived at the Red River on Feb. 13, they hesitated to cross the river out of fear that the Caddo tribe already living there would not accept them. Barraque wrote that he had to force them to cross.

Barraque next quarreled with Captain George Gray, the Indian agent for the Red River region. While the dispute largely concerned the question of which government agent now had authority to deal with the Quapaw, Barraque also took issue with Gray's sale of whiskey to the Quapaw. Barraque reported his concerns to Gov. Izard, and Gray also filed charges against Barraque.

When Sarasin (now known as Saracen), a Quapaw leader, chose to return to Arkansas with part of the Quapaw tribe in 1827, Gray blamed Barraque for encouraging the breach of the treaty.

Evidently, no official action was ever taken against either Gray or Barraque, although Gov. Izard did back Barraque's version of the dispute, stating on April 15, 1826, that Gray should not permit Indians to purchase whiskey and adding on June 6, 1827, that gross misconduct by Gray had resulted in starvation of the Indians living along the Red River.

Barraque was active in county politics, and the county records were held at his estate for five months in 1832. After 1832, however, Barraque focused more on his cotton plantation and on his family. In 1835, he hosted traveler George W. Featherstonhaugh, who describes the estate and family of Barraque in his 1844 book, Excursion through the Slave States.

Barraque died on October 29, 1858, at the home of his daughter and son-in-law. With the growth of Pine Bluff and the increasing importance of railroads, New Gascony eventually faded to oblivion.

This article is among features at ExplorePineBluff.com, a program of the Pine Bluff Advertising and Promotion Commission. Sources: Encyclopedia of Arkansas, Geni.com. Image credit: Museum of American History, Cabot Public Schools.