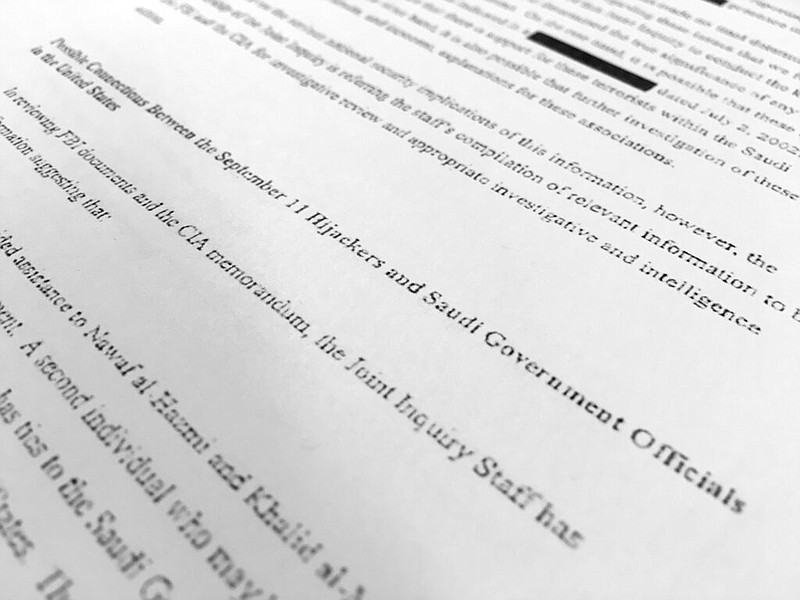 A section of a congressional report into Sept. 11, 2001, is shown in this July 15, 2016, file photo. The page is part of a 28-page, formerly top-secret report into 9/11. It questioned whether Saudis who were in contact with the hijackers after they arrived in the United States knew what they were planning. (AP/Jon Elswick)

WASHINGTON -- The FBI has released the first of what are expected to be several documents from its investigation into whether agents of the Saudi Arabian government provided support to the Sept. 11, 2001 terror plot, a move heralded by victims' families despite yielding no tangible proof of official involvement.

The document released Saturday, on the 20th anniversary of the attacks, is the first investigative record to be disclosed since President Joe Biden ordered a declassification review of materials that for years have remained out of public view. The 16-page document is a summary of an FBI interview done in 2015 with a man who had frequent contact with Saudi nationals in the U.S. who supported the first hijackers to arrive in the country before the attacks.

Biden was under pressure from victims' families, who have long sought the records as they pursue a lawsuit in New York alleging that Saudi government officials supported the hijackers.

Justice Department lawyers said last month they had recently closed an investigation related to the attacks, making it easier to share documents like the one released Saturday.

That document shows that FBI agents were still investigating as recently as 2016 possible ties between the first two hijackers to arrive in the U.S., Nawaf al-Hazmi and Khalid al-Midhar, and those who may have helped them after they arrived in the United States in 2000.

The FBI document released Saturday contains significant redactions, but nevertheless shows FBI officials were skeptical of claims by various witnesses that Saudis in the U.S. who met with the two hijackers did so accidentally through chance encounters.

Some families of 9/11 victims have sued the Saudi government, claiming the Saudis knowingly provided financial and logistical support to the terrorism plot, something that country's government has long denied.

The Saudi Embassy in Washington has said it supported the full declassification of all records as a way to "end the baseless allegations against the Kingdom once and for all." The embassy said that any allegation that Saudi Arabia was complicit was "categorically false."

As part of that lawsuit, lawyers for the families have fought for years to force the FBI to share what it knows about possible connections between the 9/11 hijackers, most of whom were citizens of Saudi Arabia, and any Saudi diplomats or intelligence operatives.

Investigators were particularly interested in details about the Saudi government's connections to Fahad al-Thumairy, a former Saudi consulate official, and Omar al-Bayoumi, a person the FBI once investigated as a possible Saudi intelligence officer.

After the 9/11 attacks, Bayoumi told investigators that he met the hijackers by chance in early 2000 in a Los Angeles restaurant and that they became friends. Bayoumi said he helped them navigate their new lives in the U.S., but denied any knowledge of their terrorist intentions.

The newly released FBI document says some of Bayoumi's statements in that 2003 interview "are directly contradicted by eyewitness statements."

The victims' families suspect those interactions were not accidental, but directed by a senior Saudi government official.

It was "difficult to reconcile" the connection between the hijackers and those who gave them support, the FBI document states, noting that one individual claimed he met the hijackers at a 7-Eleven convenience store in Northern Virginia "during a 'chance meeting', in a uniquely similar fashion to the way Bayoumi described his 'chance meeting' with Hazmi and Midhar in Los Angeles."

Still, the 9/11 Commission report in 2004 found "no evidence that the Saudi government as an institution or senior Saudi officials individually funded" the attacks that al-Qaida masterminded, though it noted Saudi-linked charities could have diverted money to the group.

Some members of the commission that investigated the 2001 attacks believed that if the Saudi government had any role in the plot, it was likely to have involved consular officials.

They also said that the commission, operating under extreme time pressure, could not run every lead to ground.

But the document released Saturday provided no new conclusive evidence about the Saudi government's role.

The 2015 interview that forms the basis of the FBI document was of a man who was applying for U.S. citizenship and who years earlier had repeated contacts with Saudi nationals who, investigators said, provided "significant logistical support" to several of the hijackers. Among the man's contacts was Bayoumi, according to the document.

The man, identified only as PII, is described as having worked at the Saudi consulate in Los Angeles.

Also referenced in the document is Thumairy, at the time an accredited diplomat at the Los Angeles consulate who investigators say led an extremist faction at his mosque. The document says communications analysis identified a seven-minute phone call in 1999 from Thumairy's phone to the Saudi Arabian family home phone of two brothers who later were detained at the Guantanamo Bay, Cuba, prison.

Speculation around the possible Saudi role increased over the years because of the government's refusal to declassify 28 pages of a 2002 congressional inquiry into the Sept. 11 attacks that specifically addressed possible connections between the kingdom and the terrorist plot.

The document was finally released in 2016, and it detailed numerous meetings between Saudi officials and the Sept. 11 hijackers, and checks from Saudi royals to operatives in contact with the hijackers. It was also an unflattering picture of the kingdom's efforts to thwart American operations against al-Qaida in the years before the attacks.

Brett Eagleson, whose father was killed in the attacks, said it was "particularly meaningful" that the first document in response to the executive order was released on the 20th anniversary of the attacks. "Today marks the moment when the Saudis cannot rely on the U.S. government from hiding the truth about 9/11," he said in a written statement pledging to "hold the Saudi government fully accountable for the tremendous pain and losses we suffered."

Biden signed the executive order after a group of hundreds of affected people -- including survivors, emergency medical workers and victims' relatives -- told him to skip the memorial event at ground zero this year if he did not move to disclose some of those documents.

Jim Kreindler, a lawyer for the victims' relatives, said in a statement that "the findings and conclusions in this FBI investigation validate the arguments we have made in the litigation regarding the Saudi government's responsibility for the 9/11 attacks.

"This document, together with the public evidence gathered to date, provides a blueprint for how [al-Qaida] operated inside the US with the active, knowing support of the Saudi government," he said.

That includes, he said, Saudi officials exchanging phone calls among themselves and al-Qaida operatives and then having "accidental meetings" with the hijackers while providing them with assistance to get settled and find flight schools.

In 2019, the Trump administration said it would share some of the relevant information with the families but not other details about the bureau's findings, invoking the rarely used state secrets privilege to argue that some elements of the investigation into the 9/11 attacks would damage national security if revealed.

The documents have come out at a politically delicate time for the U.S. and Saudi Arabia, which have forged a strategic, if difficult, alliance, particularly on counterterrorism matters. The Biden administration in February released an intelligence assessment implicating Crown Prince Mohammed bin Salman in the 2018 killing of U.S.-based journalist Jamal Khashoggi, but drew criticism from Democrats for avoiding a direct punishment of the royal himself.

Information for this article was contributed by Devlin Barrett of The Washington Post; by Eric Tucker of The Associated Press and by Mark Mazzetti and Michael S. Schmidt of The New York Times.