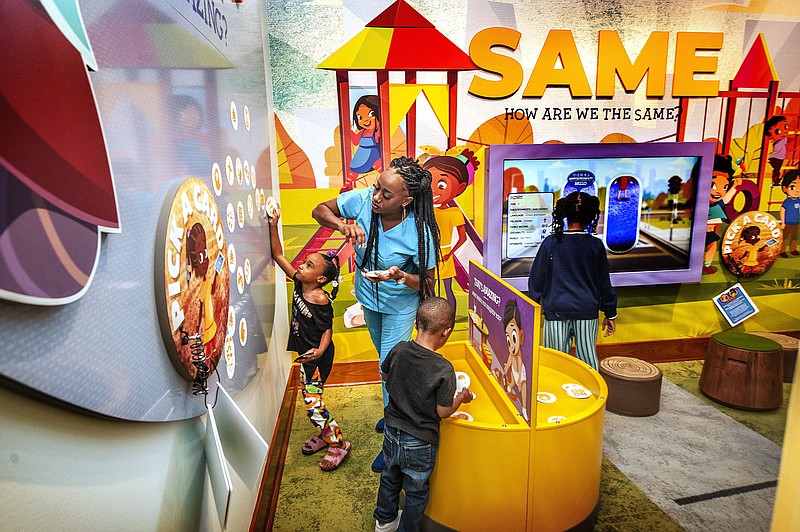 Jasmine Taylor Harris and her children Justice and Joshua place magnets on a wall at the new children's gallery at Mosaic Templars Cultural Center while Pilar Primm explores characters on a video screen. (Special to the Democrat-Gazette/Arkansas Department of Parks, Heritage and Tourism, Kirk Jordan).

Oh, don't fret. The museum is still dedicated to its mission of interpreting and celebrating Black history and culture in Arkansas.

But now there's more, including a delightfully colorful and creative children's gallery called "Same Different Amazing," which is the initial phase of an ambitious remodeling project and is said to be the first of its kind in the country.

Visitors young and old are invited to the grand opening of the new area from 10 a.m.-2 p.m. Saturday, complete with magician Tommy Terrific, food trucks, a DJ, children's crafts and activities. Masks and social distancing are encouraged.

Quantia M. "Key" Fletcher is the museum's director. She's been with the center for 13 years and is its former education director.

"One of the things I identified as education director was that there was this amazing space for adults to come in and explore and learn, but there wasn't a space for kids," she says. "We would supplement with programming, but I always wanted a place where kids could come in and feel there was a representation of themselves in the museum, where they could learn all the things we're teaching their parents."

Visitors entering the new 466-square-foot space are greeted with the words "Same Different Amazing" splashed on the left wall and cartoon images of smiling children. The gallery, part of which was once used as a space for storage and receiving, is designed for children ages 2-9.

A fabricated tree rises from the floor, and its branches spread above. Hanging from the ceiling are clear panels with fingerprints. Along the right wall is a series of small buildings, among them apartments, a school, a house. Inside each will be instructional materials for activities.

Under the question "How are we the same?" a video screen on the back wall allows children to choose from and learn about more than 20 young characters with different backgrounds, ethnicities, races, economic and physical features that are communicated through symbols in the information about them. Some come from homes with a mom and dad, some are from blended families or foster families, some have gay parents; some speak English, some use American Sign Language or speak Spanish.

"Family is always highlighted," says Christen Stanley, the center's deputy director, as a visitor flips through the choices. "Your family might not look like my family, but we all have families, we have someone we live with who takes care of us."

Fletcher says her 10-year-old daughter, Lyrick, got to play with the screen and explore the characters as the exhibit was being installed.

"We were able to have really interesting conversations about things I'd never thought of before. She saw the symbol for dyslexia and asked what that means and I explained it to her."

Near the video screen is a wall where children can play with magnetic discs that represent different interests — sports, hobbies, religion, etc. — they feel make them unique.

There's also a window where children can have their picture taken under the phrase "I am amazing because." Word balloons around the frame let them add adjectives like "smart," "kind," "helpful" and "friendly."

The final section, what Stanley says is the "call to action" area, will include parent resources like book recommendations to continue the conversation on identity. There is a large video screen behind a door that will feature scenes from places like a library, a neighborhood garden and an animal shelter that will ask children how they can help in their community.

At many of the stations there are helpful cards with questions to prompt parents to help their children get the full experience of the space, which uses playful activities to teach lessons about similarities and differences between people.

"We want children and families to be comfortable with noticing how we are different," Fletcher says. "Diversity and inclusion starts really early. We want parents to bring their kids into this space. We want them to grow with the space and really become comfortable coming here."

The room was designed by Ohio firm Exhibit Concepts, which has worked with the Mississippi Civil Rights Museum in Jackson, Miss.; the Oklahoma City National Memorial & Museum; the American Museum of Science and Energy in Oak Ridge, Tenn.; and others. Exhibit Concepts is also fabricating the $1.3 million second phase of the renovation.

The new gallery was paid for with a $248,000 grant from the Institute of Museum and Library Sciences as well as grants from AT&T, the Arkansas Natural and Cultural Resources Council and donations, Fletcher says.

"I can already tell this spot is going to be ideal for a playdate with friends or a day out with grandparents exploring this interactive exhibit," said Stacy Hurst, secretary of the Arkansas Department of Parks, Heritage and Tourism, in a news release. Along with the Delta Cultural Center in Helena-West Helena and the Historic Arkansas Museum and Old Statehouse Museum in Little Rock, Mosaic Templars Cultural Center is a museum of the Department of Arkansas Heritage.

Another new attraction from the first phase of renovation is a 7-minute film presented simultaneously on several screens that welcomes visitors in the space that once housed the exhibit "A Building for the Community."

The film tells the story of the past, present and future of the Black experience in Arkansas and features segments narrated by longtime KABF-FM, 88.3, jazz DJ John Cain, who was instrumental in leading the effort to preserve the Mosaic Templars building — the former headquarters of the Mosaic Templars of America, a Black fraternal organization founded in Little Rock in 1883, at Ninth and Broadway; farmer Abraham Carpenter, whose family established Carpenter's Produce near Grady in 1969 and sells produce to regional farmers markets and national chains; and Raven Cook, who formerly worked as an educator at Crystal Bridges Museum of American Art in Bentonville and is now director of education at the center.