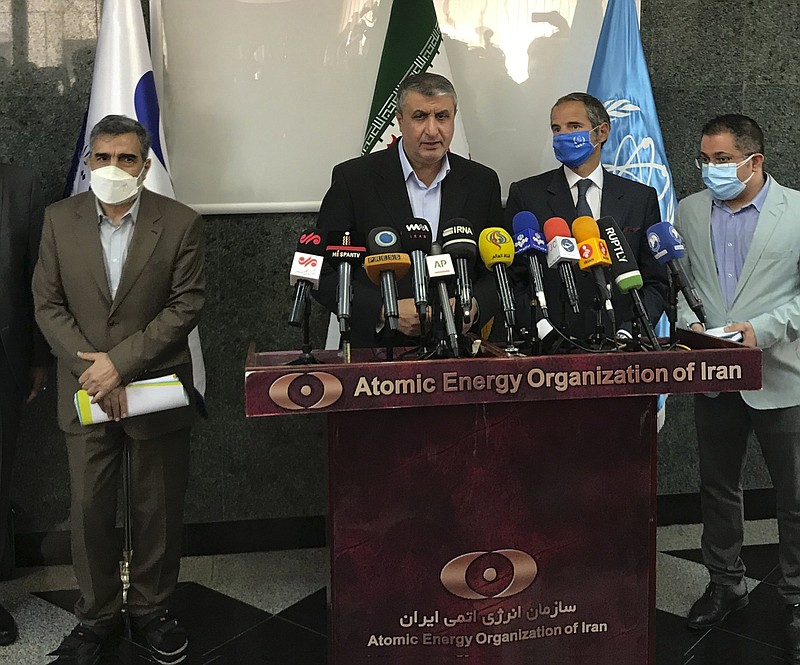 BRUSSELS -- In a last-minute deal before Iran was likely to be censured for violating its agreements with the International Atomic Energy Agency, the new government in Tehran agreed Sunday to let the organization reset monitoring devices that help measure the progress of the country's nuclear program.

That deal has been considered a minimum requirement for a resumption of talks in Vienna on trying to restore compliance with the 2015 Iran nuclear deal, which President Donald Trump abandoned in 2018.

President Joe Biden wants to rejoin the deal, but talks, which have not resumed since June, have been hampered by the desire of Iran and the U.S. to alter or enhance it. The nuclear deal essentially put tough limits on Iran's ability to enrich uranium in return for the lifting of punishing economic sanctions.

Trump restored most of those sanctions and added to them; Iran responded by breaking the enrichment limits and is now much closer to having enough highly enriched uranium to create a nuclear weapon -- which Tehran insists it has no intention of doing.

The director general of the nuclear agency, Rafael M. Grossi, visited Iran this weekend and worked out at least a temporary arrangement with Mohammad Eslami, the chief of the country's Atomic Energy Organization.

In a joint statement issued Sunday, they agreed that agency inspectors could service the monitoring equipment, which includes cameras, and replace their storage cards with new ones. But as agreed in a similar emergency deal in February, the contents of the storage cards are kept under seal and will be released to the agency only when and if Iran and the U.S. agree on a revival of the 2015 deal, known as the Joint Comprehensive Plan of Action.

The agency -- charged with monitoring Iran's nuclear program -- has been increasingly critical of Iran's failure to cooperate with the agency and of its long-standing refusal to provide explanations for the presence of traces of radioactive material at several sites or about where that material may be now.

Its frustration was detailed in two quarterly reports issued to the board recently. The agency's board meets today, and European members, along with the U.S., had been threatening to censure Iran for its noncompliance.

Iran and its new hard-line government led by President Ebrahim Raisi threatened to abandon the nuclear arms talks in Vienna if a censure resolution was passed.