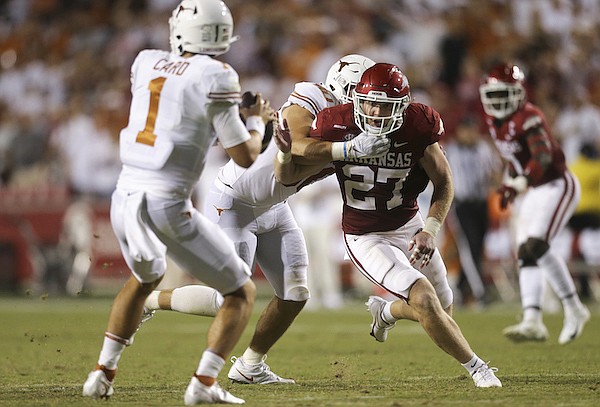 FAYETTEVILLE -- University of Arkansas linebacker Hayden Henry was named the Walter Camp Foundation national defensive player of the week on Sunday after his big showing against Texas.

The super senior from Little Rock accounted for a game-high 15 tackles, including 21/2 tackles for loss. Henry posted his first double-digit tackle game and also led the team in tackles for the first time in his career.

The legacy player, whose father Mark and brothers Hunter and Hudson are all Razorback footballers, said Texas got the SEC treatment on Saturday. The Longhorns are scheduled to join the SEC sometime between now and 2025.

"If you want to enter this conference, you're going to get a little taste of it tonight," Henry said. "You're going to play a team that's, we're not the biggest, baddest team in the SEC physically, but we play really hard. We play really tough. We don't back down from anybody. We like competition."

The Arkansas offensive line has endured negativity in recent seasons with uneven performances and a couple of years of leading the SEC in sacks allowed.

The unit began turning the narrative last season and the veteran group of starters on the line put in a dominating showing in Saturday's 40-21 rout of No. 15 Texas.

"They took a lot of heat in the past and will I'm sure some in the future," Coach Sam Pittman said. "It's part of the nature. But the way they played tonight, to rush for 333 on a good Texas squad was outstanding.

"They need credit. I don't think they gave up a sack tonight either. They came to play and I'm really proud of them."

Arkansas center Ricky Stromberg said the performance against Texas was a testimony to hard work.

"People working and just pounding the rock and getting better at blocking," Stromberg said. "And I'm so proud of our guys and our coaches and the way we handled running the ball."

The Razorback defense carved paths into the Texas backfield, accounting for 11 tackles behind the line that added up to 20 lost yards.

Some of Arkansas' over-aggressiveness and schemes caught the Longhorns off guard.

"We missed some assignments," Texas tailback Bijan Robinson said. "They came free a lot into the backfield.

"Some plays we had, we didn't expect that hard of a rush to come. They did a little bit different things that we might not have worked on during the week."

"We were making a lot of plays," Henry said. "We were in the backfield like crazy. When you can't run the ball, it just takes the wind out of our sails as an offense."

Robinson had 69 yards on 19 carries with several runs for lost yardage.

"We felt like we needed to gang tackle him," Henry said. "He's very slippery, as you could tell tonight. He'd break tackles and make good plays."

KJ Jefferson bounced back from a jittery opener to complete 14 of 19 passes against the Longhorns.

Texas was still within range in the third quarter, trailing 23-7, when a pair of defensive steps in a row took the steam out of the Longhorns.

First, the trio of Hayden Henry, Grant Morgan and Eric Gregory combined to stop Bijan Robinson for a 1-yard loss on fourth and 1 from the Texas 43. Arkansas converted that into a 22-yard Cam Little field goal.

The Razorbacks quickly cashed in Zach Williams' strip-sack against Hudson Card on Texas' next offensive snap, with Greg Brooks Jr. recovering for Arkansas. Raheim Sanders charged 26 yards on the next play to put the Razorbacks on top 33-7 with 1:50 left in the fourth quarter.

"The two drives in the third quarter I think kind of sealed the game with the turnover on downs and then obviously the fumble," Texas Coach Steve Sarkisian said. "This was not a performance I was anticipating. We'll find out about ourselves and what we're made of. I really believe this one game is not going to define us."

Arkansas extended a curious streak against Texas, winning for the fourth consecutive time at home against the Longhorns when the year ended in a "1."

The Razorbacks beat the Longhorns 31-7 in the 1971 meeting to open the streak, and followed that with a smashing success, a 42-11 upset of No. 1 Texas in 1981. The streak continued with a 14-13 decision in 1991, the Hogs' final season in the old Southwest Conference. It took 30 years for the next occasion, which Arkansas captured with its 40-21 decision on Saturday.

The Razorbacks' huge fourth-and-1 stop in the third quarter on a run at left guard by Bijan Robinson included dodging a targeting flag on a close call in the hole. Linebacker Hayden Henry charged unblocked around the left side of the Texas line and met Robinson behind the line with a massive helmet-to-helmet clash. As Henry fell off, Robinson spun while still on his feet. However, Grant Morgan and Eric Gregory were both there to finish off the stop for a 1-yard loss.

ESPN analyst Greg McElroy suggested a booth review for a targeting call was in order and that thought was echoed by the officiating analyst John Parry on the broadcast.

Henry said the stop was one of the biggest plays of the night.

"Enormous play, huge play," he said. "Fourth-down stops are like one of the biggest momentum plays a defense can create. The energy on the sideline picked up our defense. We were playing out of our minds. So we were clicking on all cylinders at every position."

• Treylon Burks caught a pass in his 22nd consecutive game and is one of seven players in the nation with 20 or more games played who has a reception in every game in his career.

• Jake Yurachek's partially blocked punt in the second quarter after a muff by punter Cameron Dicker was the first for the Razorbacks since Jeremy Sprinkle blocked an Alabama punt on Oct. 10, 2015.

• Tyson Morris' 45-yard catch in the third quarter was the longest of his career.

LT Myron Cunningham had a standout day and the entire offensive line gouged the Texas defensive front. Arkansas gave up no sacks and racked up 333 rushing yards, 471 total yards and 7.1 yards per play.

The super senior from Little Rock was all over the field. Henry accounted for 15 total tackles, including 3 solo stops and 2.5 tackles for loss. Henry posted a career high in tackles and led the team for the first time.