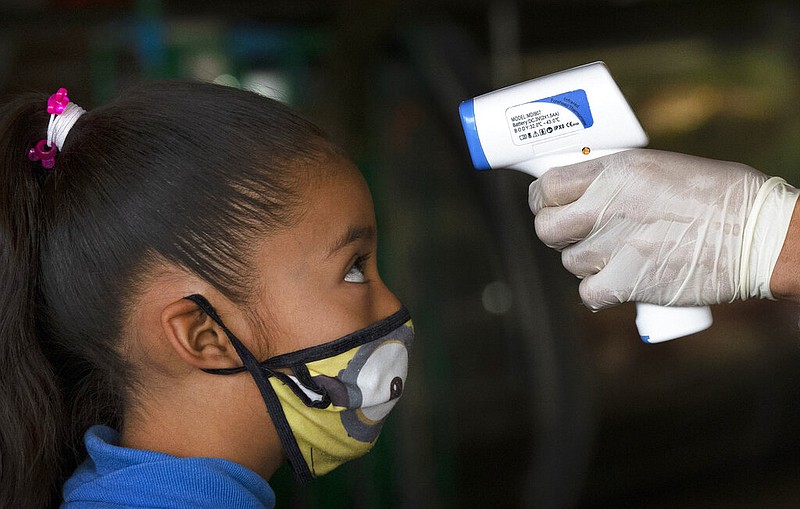 A health worker, checking for symptoms of the novel coronavirus that causes covid-19, takes the temperature of a child wearing a mask in this June 18, 2020, file photo. (AP/Marco Ugarte)

Questions about covid-19 vaccinations for children persist, with two health experts on Sunday looking at the end of October as a likely start date for shots in children ages 5-11, even as some senior Biden administration officials have said approval for that age group was unlikely before the end of the year.

Getting the green light for younger children will require careful and expeditious review of the clinical data, Dr. Scott Gottlieb, a former Food and Drug Administration commissioner who sits on the board of Pfizer, one of the vaccine makers, said on CBS' "Face the Nation."

Still, "in a best-case scenario," the Pfizer vaccine could be ready by Halloween, or Oct. 31, for younger children. "I have confidence in Pfizer in terms of the data that they've collected," Gottlieb said.

At the moment, only children ages 12 and older qualify for vaccination. An earlier approval for younger children would be good news for parents, many of whom are anxious about classroom safety as schools reopen.

The FDA recently warned parents against trying to get younger children vaccinated before an official recommendation, saying there are unanswered questions about dosing and immunity in this age group.

The hope of fall approval comes after two of the nation's top public health officials -- Dr. Francis Collins, director of the National Institutes of Health, and Dr. Anthony Fauci, the administration's chief pandemic adviser -- backed away from that goal last month, instead seeing the step as more likely in the winter.

[Video not showing up above? Click here to watch » arkansasonline.com/913murthy/]

On "Face the Nation," Dr. James Versalovic, interim pediatrician-in-chief at Texas Children's Hospital, said he agreed with Gottlieb on the feasibility of an October approval. "We're doing everything we can now to move these trials ahead," he said.

Both Pfizer and Moderna are gathering data on the safety, correct dose and effectiveness of the vaccines in children. Compared with adults, children diagnosed with covid are more likely to have mild symptoms or none at all. Children are also far less likely to develop severe illness, be hospitalized or die from the disease.

But hospitalizations of children are rising as the more contagious delta variant spreads. Versalovic said that he and his colleagues are "seeing record numbers" of infected children, as are physicians nationally.

[Video not showing up above? Click here to watch » arkansasonline.com/913javid/]

"We continue to be on a high plateau" and may yet hit "another peak," he said.

Biden is weighing a multilateral meeting ahead of the U.N. leaders' sessions aimed at vaccine supply, and has said he will announce new vaccine measures this month.

"The president will be making announcements ahead of the U.N. General Assembly about additional measures that we're taking to help vaccinate the world," Murthy said on CNN's "State of the Union."

The session at which world leaders address the U.N. begins on Sept. 21.

Biden said Thursday that he'd make the announcement, but hasn't yet signaled what it will be. The U.S. has pledged to donate more than 600 million vaccine doses by mid-2022, though billions will be needed to curb the covid-19 pandemic.

Biden's previous efforts to muster global donations have fallen short of target. Group of Seven leaders had hoped in June to announce a pledge of 1 billion new doses; instead, they reached only 613 million new doses that hadn't been pledged already. That includes 500 million Pfizer doses from the U.S., which began being shipped in August.

"We also know this virus transcends borders," Biden said Thursday. "That's why, even as we execute this plan at home, we need to continue fighting the virus overseas, continue to be the arsenal of vaccines."

[Video not showing up above? Click here to watch » arkansasonline.com/913frpass/]

The annual diplomatic mega-event that was held almost entirely virtually last year because of the pandemic, will be far more physical when it convenes Tuesday for two weeks.

Although strict pandemic rules will be enforced, including mandatory mask-wearing for all participants, required vaccinations for headquarters staff and severely limited access to its 16-acre campus, the U.N. is aiming for at least a partial restoration of the person-to-person diplomacy that its leaders regard as critical for the organization's ability to function.

Each delegation in the General Assembly hall will be permitted up to five members, compared with two in 2020, when the speeches of all member-state leaders were delivered via prerecorded video on a large screen to largely empty seats.

"The desire is to have an improvement over what we had last year," Nigeria's ambassador, Tijjani Muhammad-Bande, who was president of the 2019 General Assembly, told PassBlue, a news site that covers the U.N.

Still, the prospect of hundreds of diplomats converging from overseas at the U.N. has been a persistent source of concern, particularly because of the contagion risks posed by the delta variant of the coronavirus.

Last month, the U.S. Mission to the United Nations, acting on behalf of the host country, encouraged other members to scale back any attendance plans to avoid the risk of a "superspreader event."

U.N. officials have said they are strictly following the health protocols of New York City. They also are keeping many General Assembly side meetings virtual and are not planning any social gatherings at the headquarters, including the traditional lunch hosted by the secretary-general.

Israel is making preparations to ensure it has sufficient vaccine supply in case a fourth round of covid-19 shots is needed, the country's top health official said on Sunday.

"We don't know when it will happen; I hope very much that it won't be within six months, like this time, and that the third dose will last for longer," Health Ministry Director General Nachman Ash said in an interview with Radio 103FM.

Israel, which has mainly used the Pfizer Inc.-BioNTech SE vaccine, has so far inoculated about 2.8 million people with a third dose after beginning a drive to administer booster shots in August. Health officials have said the effects of the initial covid-19 shots weaken five months after inoculation, making boosters necessary.

The U.S. and U.K. also plan to start offering booster shots later this month, while Europe is also considering third doses. That comes as the World Health Organization pleads for a moratorium on third shots. Director-General Tedros Adhanom Ghebreyesus said recently that governments should wait at least until the end of this year so that poorer countries can get better access to vaccines.

In addition to those who have received boosters, about another 2.7 million of the 7 million eligible Israelis have had two jabs and about 500,000 have had just one shot. Almost 1 million people haven't had any vaccine doses.

The country, once a front-runner in the global race to move on from covid-19, became a pandemic hot spot in early September. After the spread of the delta variant over the summer, Israel had the world's highest per capita infection rate in the week through Sept. 4, according to figures compiled by Johns Hopkins University.

Ash said last week that the booster shots appear to have halted the surge in infections.

Authorities in Britain have decided not to require vaccine passports for entry into nightclubs and other crowded events in England, Britain's health secretary said Sunday, reversing course amid opposition from some of the Conservative government's supporters in Parliament.

Health Minister Sajid Javid said the government has shelved the idea of vaccine passports for now but could reconsider the decision if covid-19 cases rise exponentially once again.

"We've looked at it properly and whilst we should keep it in reserve as a potential option, I'm pleased to say that we will not be going ahead with plans for vaccine passports," Javid told the BBC.

The U-turn came just days after both the government's vaccines minister and the culture secretary suggested that vaccine passports would still be necessary, despite growing opposition from lawmakers.

In particular, members of the governing Conservative Party have objected to such passports as an unacceptable burden on businesses and an infringement on residents' human rights.

The idea of requiring people to show proof of vaccination or a recent negative test for covid-19 has been uncomfortable for many in Britain, where people generally aren't required to carry identification documents.

Japan's government says more than 50% of the population has been fully vaccinated.

Japan's vaccine rollouts began in mid-February, months behind many wealthy countries because of its lengthy clinical testing requirement and approval process. Inoculations for elderly patients, which started in April, were also slowed by supply shortages of imported vaccines, but the pace picked up in late May and has since achieved 1 million doses per day.

Economy Minister Yasutoshi Nishimura, who is in charge of covid-19 measures, told NHK public television's weekly talk show Sunday that about 60% of the population is expected to be fully vaccinated by the end of September, on par with current levels in Europe.

The government is studying a roadmap for easing restrictions around November when a large majority of the population is expected to be fully vaccinated. That would allow fully vaccinated people and those who test negative to travel, gather for parties or attend mass events.

Japan last Friday extended the ongoing state of emergency in Tokyo and 18 other areas until Sept. 30. It had been scheduled to end Sunday. The measures focus on requests for eateries to close early and not serve alcohol.

A city in southern China that is trying to contain a coronavirus outbreak told the public Sunday not to leave town, suspended bus and train service and closed cinemas, bars and other facilities.

Anyone who needs to leave Putian, a city of 2.9 million people in Fujian province south of Shanghai, for an essential trip must have proof of a negative coronavirus test within the past 48 hours, the city government announced.

China declared the coronavirus under control in early 2020 but has suffered outbreaks of the more contagious delta variant. Authorities say most cases are traced to travelers arriving from Russia, Myanmar and other countries.

In Putian, 19 new infections that were believed to have been acquired locally were reported in the 24 hours through midnight Saturday, according to the National Health Commission. One was reported in Quanzhou, also in Fujian.

The first cases in Putian were students from Xianyou county, but experts suspect the outbreak might have originated with the father of one student who returned from Singapore on Aug. 4, according to the official Global Times newspaper.

Elsewhere in Putian, cinemas, card rooms, gyms, tourist sites and other facilities were ordered closed, the city government announced. Restaurants and supermarkets were told to "strictly control" customer numbers and to check for fevers. Schools were ordered to require students to wear masks in class.

China has reported 4,636 coronavirus deaths out of 95,199 confirmed cases.

Information for this article was contributed by William J. Broad and Rick Gladstone of The New York Times; by Josh Wingrove and Alisa Odenheimer of Bloomberg News (TNS); and by staff members of The Associated Press.