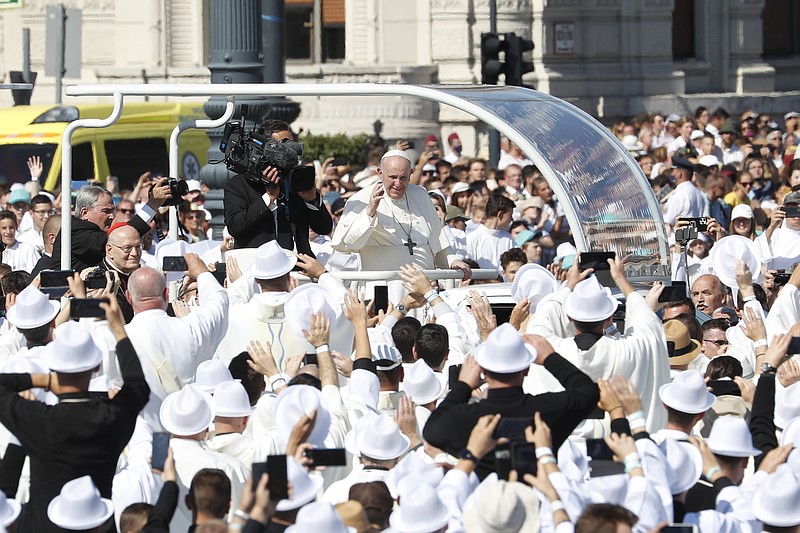 Pope Francis arrives to celebrate a mass for the closing of the International Eucharistic Congress, at Budapest's Heroes Square, Sunday, Sept. 12, 2021. Francis is opening his first foreign trip since undergoing major intestinal surgery in July, embarking on an intense, four-day, two-nation trip to Hungary and Slovakia that he has admitted might be overdoing it. (AP Photo/Laszlo Balogh)

After meeting privately on Sunday with Hungary's Viktor Orban, the far-right autocrat who has championed a vision of a closed-door Europe, Pope Francis took the stage in front of tens of thousands and called on the country to "extend its arms toward everyone."

[Video not showing up above? Click here to watch » arkansasonline.com/913francis/]

"My wish is that you be like that: grounded and open, rooted and considerate," Francis said during an outdoor Mass, marking his only day in Hungary before he continues to Slovakia.

Francis' remarks amounted to a careful but clear critique of Hungary's anti-migrant policies under Orban, the three-term prime minister who has called migration a "poison." The pope's comments came at the tail end of his seven-hour trip to Budapest, where much of the attention had centered on how Francis would address a leader who is his political opposite.

[Video not showing up above? Click here to watch » arkansasonline.com/913orban/]

For the pope, the meeting with Orban had been an unavoidable matter of protocol: He was coming to Budapest to celebrate the closing Mass of a major Catholic congress and couldn't bypass the country's political leaders. For Orban, the meeting was a balancing act -- welcoming a pope with a diverging vision for Europe, while also showing respect as a way to retain Catholic voting support.

The face-to-face encounter was cautiously staged and had some awkward elements. As Francis arrived at a museum that was the site of the meeting, Vatican cameras cut away. After the meeting concluded about 40 minutes later, Orban quickly shared a photo of himself talking with the pope and said he had asked Francis "not to let Christian Hungary perish." The Vatican simply said the meeting, which also included Hungarian President Janos Ader, had been cordial, touching on such issues as the Hungarian church, the environment, and the "protection and promotion of the family."

There was no mention of migration, an issue on which Francis and Orban stand perhaps the farthest apart.

Throughout his papacy, Francis has regularly described the need to welcome migrants as a religious and moral imperative, occasionally punctuating his pleas with dramatic action: In 2016, at the height of Europe's migration crisis, he traveled to a Greek island and returned with 12 Syrian asylum seekers on the papal plane. But Francis's welcoming message has not proved politically popular in Europe, and over the years, Orban's approach has steadily gained traction. The European Union has controversially fortified ties with other countries -- namely Libya and Turkey -- as a way to limit the number of asylum seekers reaching E.U. soil.

Carlo Fidanza, a member of the European Parliament from the far-right Brothers of Italy party, argued that Orban's vision has become the "shared viewpoint of 27 [E.U.] governments."

"It's a matter of common sense and pragmatism born out of the experience of 2015," Fidanza said.

Over the coming days, Francis will be making a full state visit to Slovakia, spending three nights there. Some had interpreted the lopsidedness of the trip as an intentional slight to Hungary. The Vatican, in the run-up to the trip, strained to explain that Francis was visiting Budapest for a single religious event, the International Eucharistic Congress, and then continuing on for the main part of his journey. Speaking with reporters, the Rev. Kornel Fabry, the general secretary of the congress, said that many Hungarians were initially "angry" about the brevity of the trip but later came around.

While on the ground in Budapest, Francis also met with Hungary's bishops, as well as representatives from other religions, including Judaism. In the first of those meetings, with the Catholic bishops, he quoted the Gospel -- "Love each other as I have loved you" -- in a reference to migration. Later, with the broader group of religious representatives, he warned that the threat of antisemitism is "still lurking in Europe and elsewhere."

"This is a fuse that must not be allowed to burn," Francis said.

At the Mass, his final event in Budapest, the pope spoke before tens of thousands of people seated across the city's vast Heroes' Square. The event was held outdoors in a nod to coronavirus transmission concerns, though there was no social distancing. During the pontiff's earlier event with religious leaders, held indoors, most of the attendees were not wearing masks.

Information for this article was contributed by Stefano Pitrelli of The Washington Post.